BEYOND THE INFINITE TWO MINUTES Interview: Junta Yamaguchi on His Inventive Sci-Fi Comedy

In the midst of a pandemic, with limited resources and using an iPhone to shoot, Junta Yamaguchi and his team made one of the most ingenious movies in recent years: Beyond the Infinite Two Minutes.

The Japanese sci-fi comedy proves that with a clever script – in this case written by Makoto Ueda – and the dedication to accurately plan and execute its production, you can deal with classic science fiction elements without a big budget.

Developed entirely in one location – several floors of the same building – and in one long take, Beyond the Infinite Two Minutes allows its protagonist (Kazunari Tosa) to communicate with himself in the very near future … only two minutes later, thanks to the monitor of his computer, connected to the television of the coffee shop he manages. We see the main character go downstairs from his apartment to the cafe and communicate with his past self, changing the perspective of the previous scene.

As his acquaintances join the movie and the sci-fi situation develops better, some conflicts arise: they fear breaking the loop and creating a time paradox, therefore the future begins to "control" them; their ambition grows until they create the "Droste effect,” they bring down the monitor to be able to see beyond a couple of minutes into the future, a situation of obvious danger. 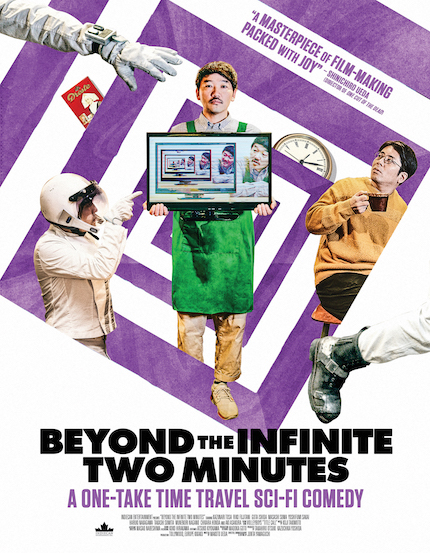 Beyond the Infinite Two Minutes has been aptly compared to another recent Japanese effort: One Cut of the Dead, also a fresh, witty and fun genre movie. Both start from an apparently confusing scenario, although in the end every detail makes sense and the result is very pleasing.

Yamaguchi's movie underlines the importance of living in the present, a particularly resonant theme in this pandemic time: in the face of uncertainty, there’s nothing left but to appreciate each moment to the fullest.

After being shown at such international festivals as Fantasia and Los Cabos, Beyond the Infinite Two Minutes is now available on a number of digital and cable platforms, including iTunes, Amazon, VUDU, iNDemand and DISH. For this reason I chatted with Yamaguchi, who in addition to being the director served as cinematographer and editor.

ScreenAnarchy: I know you come from the theater, how did you make the transition to cinema?

Junta Yamaguchi: I’m a member of a theater troupe (Europe Kikaku), I’m the video director. I’ve been doing this for about 17 years now and the troupe itself has existed for more than 20 years, so we have a pretty long history. The people in the troupe really wanted to go into film and myself, as a director, felt ready to go into this new realm.

The whole concept of two monitors that show different times, and facing them each other and having this “Droste effect,” was already conceived by the writer of the film: Makoto Ueda. He had created this concept over 10 years ago. All those elements combined, we thought now was the time to make a full-length feature film.

Science fiction is a complex genre, what motivated you to tackle it?

Actually science fiction is one of our strongest genres to do. Our performances deal with science fiction mostly, so we’ve already done things like time paradoxes, time travel or multiverse. That coupled with comedy, the sci-fi comedy is our favorite genre.

Back in 1998 we had our first performance and it was a story about two men who get abducted by aliens, so right from the beginning we were dealing with science fiction. It’s only natural that our first film be science fiction, it’s what we do best.

Plots about time loops and paradoxes can become complex and confusing, how did you keep it concise and enjoyable?

The biggest challenge was that it had to be in a single shot. We paid particular attention to time management. The two-minute time delay needed to be very accurate, we couldn’t go off even one second. Everything, from the camera movement to the actors, had to be very precise. It was very demanding, trying to get the choreography in place and making sure that everything was tight.

Tell us more about the decision to make a long take of little more than an hour.

The theme of the film is time so we decided to go with this long take so that the audience can really experience being on that same time as the movie progresses. 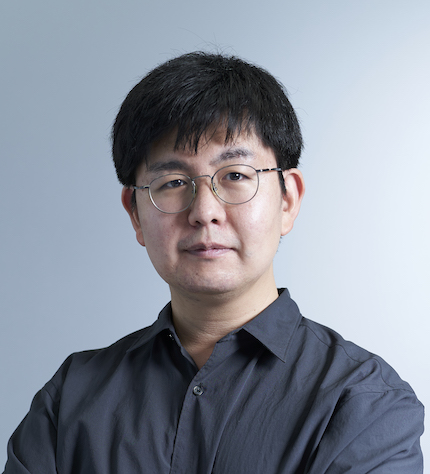 Also because the amount of days we had to shoot the film was very limited. If we were to do these single takes here and there, and checking the lighting, the acting and the sound, it would have been a huge mess.

I as a director was checking so many different things that my mind literally exploded, I caused a lot of trouble for everybody in the crew. It was difficult and stressful.

Is BEYOND THE INFINITE TWO MINUTES a statement? You don't need a Hollywood budget to do science fiction?

I’m not sure we came in with the intention of sending a message or making a statement. Actually, if I have the opportunity to work with a higher budget, I would love to. High-budget films that are a single take, like 1917 and Birdman, are very beautiful.

We focussed on making a film that everybody can enjoy it, wherever you live in this world. Time is equal to all of us, time really transcends borders and is a shared thing, so we can directly speak to the world. Another aspect that we really focused on was to make something unique, something that no one has seen before.

We basically did our best with the resources that we had. We believed in ourselves, that this was going to be something interesting and fun for everybody.

Good science fiction leaves you thinking. I feel that the message here is to live in the present, relevant in COVID-19 times

You hit the nail on the head, it’s really important that we value the present moment because if we look too far into the future, it can define what we do in the present if we try to fulfill whatever destiny the future tells us. In the latter half of the film the message is: our actions in the present can influence the future.

A version in Spanish of this interview was also published at Cinema Inferno.

Do you feel this content is inappropriate or infringes upon your rights? Click here to report it, or see our DMCA policy.
1917Beyond the Infinite Two MinutesBirdmanJapanJunta YamaguchiKazunari TosaMakoto UedaOne Cut of the Dead

More about Beyond the Infinite Two Minutes