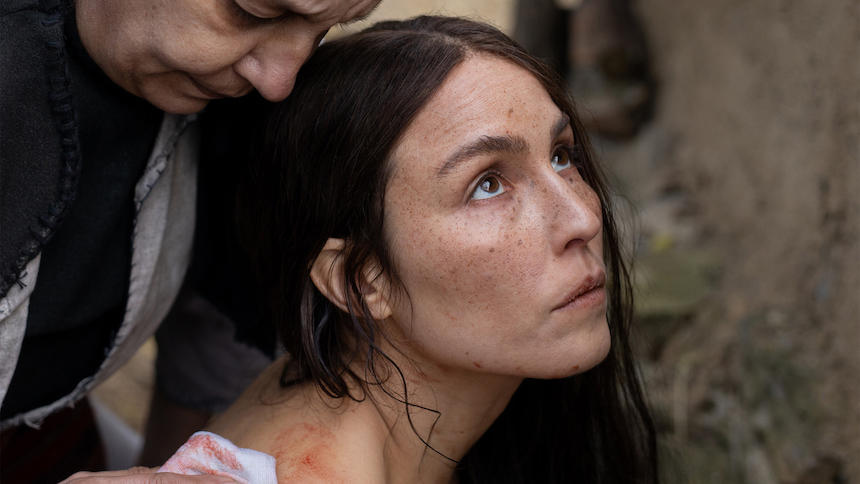 If you need any more evidence that the horror genre not only contains multitudes, but also remains incredibly malleable, look no further than writer-director Goran Stolevski’s stunningly realized feature-length debut, You Won’t Be Alone.

A supernaturally-themed horror film with a distinctly Malickian flavor, You Won’t Be Alone filters a surprisingly touching, poignant exploration of the shifting nature of identity, gender (and fluidity thereof), and humanity itself through the singularly conceived and thrillingly executed point-of-view of a rebelliously inquisitive witch, the proverbial outsider, pariah, and exile from the patriarchal social order, across several decades in pre-industrial Macedonia. It’s also a story of abuse, of escaping the physical and emotional abuse of failed mothers and failed mother figures and finding unconditional love in partnership and family.

You Won’t Be Alone opens sometime in the early 19th century, long before the industrial revolution or machinery of any kind remade agriculture into a commercial venture operated for capitalistic profit. The unnamed characters we initially meet have no names, just identities circumscribed by their limited experiences as farmer, field worker, wife, or mother.

For one woman, seemingly alone after giving birth (she immediately returns to work), motherhood comes at an extraordinary cost: A centuries-old, shape-shifting witch, Old Maid Maria (Anamaria Marinca), selects the woman’s infant daughter as her successor and companion. The woman desperately attempts to bargain with the witch, arguing for and receiving a 16-year extension, hoping to save her daughter somehow in the intervening years.

She fails, of course, but her decision, born out of desperation and love, leaves her daughter, Nevena (Sara Klimoska), in a nearly feral state. Raised inside a literal mountain, protected by Christian icons painted on the walls, Nevena grows up without any contact beyond her fearful, abusive mother. When, inevitably, the witch reappears to claim Nevena as her own, Nevena leaves the mountain with a new, far more abusive maternal figure.

Defined by her envy, jealousy, and hatred of the humans who not only exiled her from their company, but also attempted to burn her to death, the witch treats Nevena less like a daughter and more like the cattle she hunts for sustenance. Nevena’s natural wide-eyed innocence and naïveté gives her a kind of protective barrier or shield from her false mother’s abusive imprecations.

Inevitably, they part ways, but the witch, despite her contempt for the faux-daughter who rejected her, hovers perpetually nearby, ready at a moment’s notice to interfere or interrupt Nevena’s emotional or persona growth. Inheriting her faux-mother’s ability to shape-change — a gnarly, viscera-filled transformation that involves the death, intentional or inadvertent, of the individual Nevena hopes to imitate — gives her temporary cover from her faux-mother’s destructive urges. It’s there, in the skins she wears and the organs she consumes that Nevena begins to live one life after another, sometimes female (Noomi Rapace initially, Alice Englert eventually), sometimes male, sometimes (almost) old, sometimes young, learning the pleasures and pains, the gains and losses, the joys and grief inherent in the human condition.

Stolevski consciously adopts a Malickian minimalism — ruminative, stream-of-consciousness, interior dialogue, a spiritual approach to nature and man (or woman’s) place in it —to tell Nevena’s extraordinary story over several unbroken decades that’s both universal in its specificity and singular in its particularity. Stolevski also ties Nevena’s journey closely to the changing seasons, the rhythms and rituals of daily Macedonian life.

Not surprisingly, the focus on those rhythms and rituals means that You Won’t Be Alone doesn’t follow conventional, plot-focused storytelling. It’s both looser and more focused than that, suggesting, like so much of Malick’s better work (A Hidden Life, The Tree of Life), that true, long-lasting meaning involves finding a form of transcendence in the everyday.

You Won't Be Alone premiered Saturday, January 22, at the Sundance Film Festival.

You Won't Be Alone

Do you feel this content is inappropriate or infringes upon your rights? Click here to report it, or see our DMCA policy.
Alice EnglertAnamaria MarincaGoran StolevskiNoomi RapaceSara KlimoskaYou Won't Be AloneDramaHorror

More about You Won't Be Alone