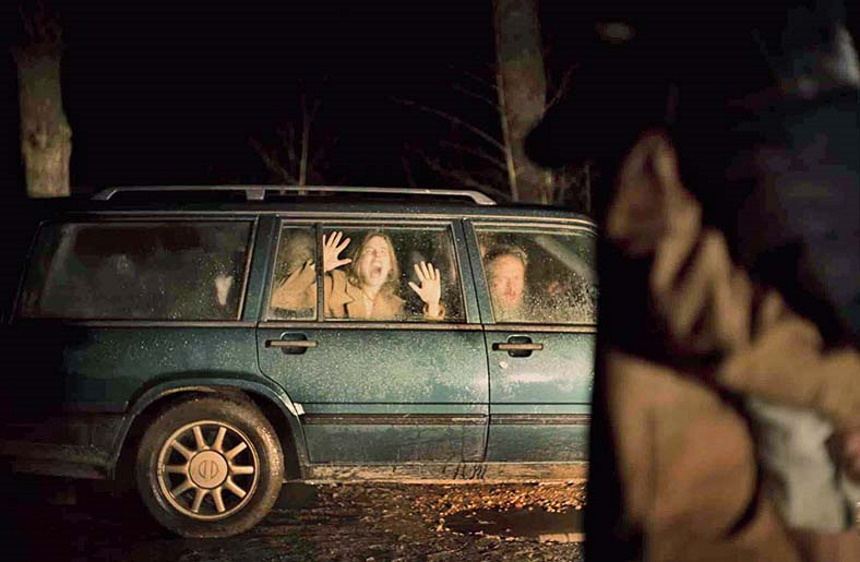 Some people - your humble critic included - can find it very difficult to say no in social situations. Extricating oneself from uncomfortable circumstances can be a challenge, especially when it seems like the end of the unease is in sight. Christian Tafdrup’s latest film, Speak No Evil, takes this idea, that politeness can often backfire, to some very disturbing ends. It’s a bit of an endurance trial, a series of baffling decisions that are easy to second guess from the safety of the audience, all the while never quite leaving reality until all of the gracious demurring from one’s better judgment results in a catastrophe that seems like it’ll never end.

A Danish couple, Bjørn (Morten Burian) and Louise (Sidsel Siem Koch) meet a Dutch couple, Patrick (Fedja van Huêt) and Karin (Karina Smulders) while both families are on holiday in Italy with their respective children. Despite several awkward interactions while abroad – Patrick is a bit boorish, and his son Abel seems just a bit off – Bjørn and Louise accept when they receive a surprise invitation to a weekend in the Dutch countryside with their “vacation friends”. While they aren’t particularly excited, they are also a bit too polite to say “no” and decide to give this somewhat odd family another try. It does not go well.

Almost immediately the visitors find themselves in one uncomfortable position after another. Louise’s vegetarian diet is ignored, their daughter Agnes is forced to sleep on a mattress on the floor in Abel’s room, a night out for what they are told is classic Dutch cuisine turns into a queasily gropey night in a rather decrepit roadhouse; the list goes on and on. But ever the polite family, Bjørn doesn’t complain, ignoring red flags left and right, in order to keep the peace. Louise is less complacent, but equally silent on the matter until one night an incident with Agnes finally sends them packing in the middle of the night.

Things get better. Apologies are made.

Then things get worse. Much worse.

Speak No Evil is among the most unrelentingly pessimistic films I’ve seen in quite a long time. A diatribe against politeness at all costs, a misanthropic examination of the lengths to which civilized society will go in order to not upset the apple cart, and by the end, a full-blown torture porn endurance trial; it is not one for the more delicate viewer. Those of us who revel in exploring the darker side of human nature, on the other hand, will have a lot to dissect by the time the film reaches its gruesome end, even as we question find ourselves questioning whether our protagonists are even worth saving at some points as they repeatedly put themselves in danger against all common sense.

For all of the discomfort of the film, Speak No Evil is at times blissfully serene. For every moment of cringe-inducing unseemly behavior from Patrick – played with gusto by van Huêt, clearly reveling in this rare opportunity to go all out – there is a moment wherein it seems that perhaps the guests are simply overreacting to slight cultural differences, or even worse, a scene of true camaraderie.

A quiet day at the park has everyone all smiles until a small incident with Abel and Agnes elicits Patrick’s true colors. A visit to a quarry with Patrick and Bjørn gives the former a bit of humanity, and the latter an outlet for his own frustration, a moment in which Tafdrup deftly diverts and upsets our expectations for both men. It’s a delicate and yet wildly chaotic dance that the film performs with its audience, making both us and the film’s protagonists ultimately complicit in our own fates. It’s unpleasant, but maybe we deserve it.

This same dance is reflected in Speak No Evil’s diabolically manipulative visual sense. Scenes appear to be equally divided between night and day, leaving no safe space for anyone. For all of his sinister bombast, Patrick is equally adept at putting his guests at unease with a look as with an outburst, he lurks in the shadows, but also manages to make even the most benign daylight interactions feel wrong. Karina, though mostly quiet, gradually makes her presence felt through more traditionally feminine means, providing a perfect balance to Patrick’s aggression.

From the very start of Speak No Evil, it is very clear who the winners and losers will be, but the journey is the thing here. I was reminded of last year’s brutal New Zealand thriller, Coming Home in the Dark, as a film that is unrelentingly unpleasant, albeit in a very different way. Where that film refused to pull any punches in its delivery of one gut-punch after another, Speak No Evil grabs its characters by the arms and forces them to beat themselves, all the while asking them why they’re doing it. A passive choose-you-own-adventure style thriller where the characters continuously make the wrong calls for what they think are the right reasons. It’s nasty, but I loved it, and I’ll certainly think twice before putting myself in that same kind of position next time the situation rears its ugly head, because it always does.

Do you feel this content is inappropriate or infringes upon your rights? Click here to report it, or see our DMCA policy.
Christian TafdrupDenmarkNetherlandsSundance 2022Mads TafdrupMorten BurianSidsel Siem KochFedja van HuêtDramaHorrorThriller

More about Speak No Evil