It's no secret that Guillermo del Toro loves monsters; it would be more accurate to say that, like many of us, he knows he is something of a monster himself. Living outside what is considered a 'normal' existence, halfway between the light and the shadow, monsters like these are to be feared and loved, but perhaps more the latter. The monsters are, almost every time, the hero; or if not the hero, than there is something to be pittied about them, something that justified their anger, something we can grasp, even as the monster we might more easily identify with, is the one that saves the day.

Given his penchant for the macabre and its place in society, it's not surprising that del Toro would choose to remake a film such as Nightmare Alley. The story of a man who rises triumphantly and falls spectacularily, starting as carnie and ending as ... well, something a lot lower, would seem to fit perfectly into del Toro's oeuvre. And yet, the marriage of del Toro's brand of horror and the film's essential noir story, doesn't quite mix, feeling and looking a bit like a cold not-blend of oil and vinegar.

The first time we see Stan Carlisle (Bradley Cooper), he's burying a body under floorboards and setting the house on fire. The second time, he's wamdering the fairgrounds of a carnival in an unnamed town, particuarly fascinated by the Geek (a sideshow attraction of a feral man who eats live animals and is kept in a cage). Given that in this tine period, a unemployed drifter is not an uncommon sight, and Stan finds himself employed quickly enough by the carnival's head man Clem (Willem Dafoe). He attaches himself to Zeena the fortune teller (Toni Collette) and her man Pete (David Strathairn), and is enamoured of Molly (Rooney Mara), much to the chagrin of her guardian Bruno (Ron Perlman).

This first half of the film contains so much of what del Toro does best: it's his love affair with monsters writ on the most perfect canvas, in the location where these monsters are at home: the carnival. This is there world, where they are accepted and appreciated. Stan, as the 'normal' person, is the outside and invader: he wants to be one of them, but whatever his darkness is, it isn't the same kind as theirs. This carnival is reds and golds, the bright lights and cold warmth of the tents that both reveal and hide their secrets, and the actors all fit into this world like proverbial gloves, each of them understanding this dark and beautiful world, even with its dangers, is where their characters belong, and indeed, thrive.

But Stan wants more, and he wants Molly to join him; was Pete's death accidental, or did Stan have a hand in it? Whatever the answer, Stan has Pete's secret book with details on performing his mind-reading tricks, and with Molly at his side, Stan soon becomes a popular medium. Cate Blanchette steps into their lives as the femme fatale, in the form of Lilith Ritter, a psychoanalyst. She figures out Stan's game, but Stan offers to cut her in: she gives him details on her rich clients, and gets a share of the money he earns from his psychic enchantments. 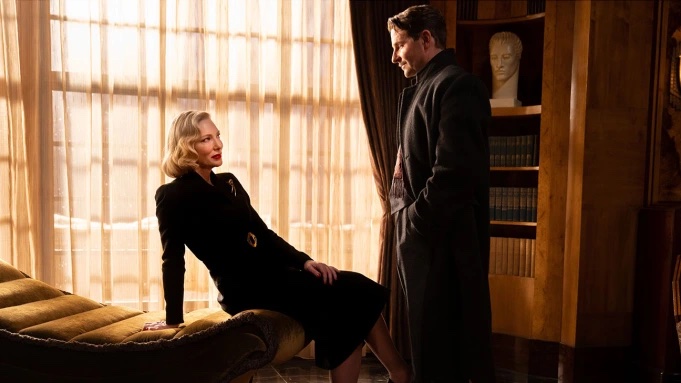 Stan seems to be inventing himself as he goes along; while we learn over time of the unpleasant circumstances from which he came, he remains a blank slate; he can convince people of things, to be sure, and perhaps because we're in on his tricks, we're not going to succomb to his charms. But his desire for something better has little motivation, and his alleged attractiveness to several women a bit puzzling, as the one interesting thing he does while at the carnival seems hardly interesting enough. Like the rest of the supporting cast, Blanchette is clearly relishing a role that fits her as well as her tailored suit: a woman with (in that time) rare power, who will destroy a man just because she can.

Horror and noir are certainly similar genres, with their monsters (though the former has its share of inhuman ones), darkness and shadows, and a sense of foreboding. But horror, especially the horror of del Toro, has something that film noir lacks, which is hope, and film noir is, in the end, a very bleak and, more importantly, cynical mode of storytelling, one in which there really are no heroes, no light at the end of the tunnel. And that just doesn't fit here. This is not to say that del Toro's work has not featured truly horrific monsters and some truly, at least in part, bleak stories; two of his films centre on one of the most horrific events of the 20th century.

But there was always hope somewhere, and as the hopeful characters, the true monsters of the story, disappear from the story, all we're left with is an uninteresting man who has contributed nothing to the world around him, and even so, is perhaps getting far worse than he deserves. It's certainly feeling a lot more cynical in the world these days, to be sure, and there's nothing to say a filmmaker can't try new modes of storytelling. But given the lushness, the depth, the beauty in the monstrous that is seeps into every aspect of del Toro's work, from cinematography to music to production design (and his team outdoes themselves in all these areas), there's something that just doesn't quite fit.

Perhaps it's Cooper, who just lacks the gravitas and layered charm necessary for the role; perhaps it's the length, taking a little too long on a road that lets us enjoy the sights without sufficient exploration; but more likely, while the carnival world is del Toro's milieu, these dark urbans streets filled with serial killers, vapid hucksters, and people who take perverse pleasure (and success) in their cruelty are not. It's like two sets of puzzle pieces, that, beautiful as they are, can't be forced together.