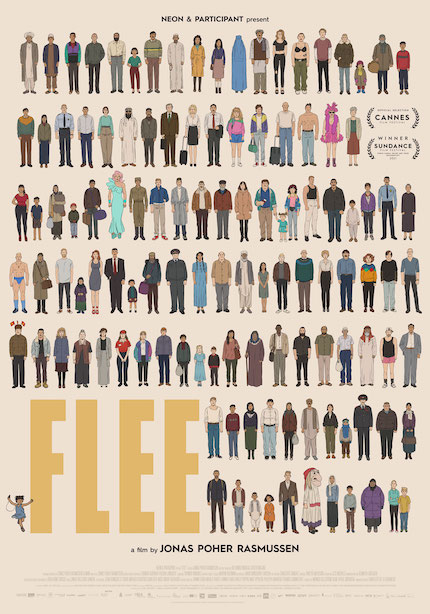 Jonas Poher Rasmussen's animated documentary, Flee, chronicles the harrowing journey of Amin Nawabi (pseudonym used for protection and privacy), an Afghan war refugee to the West, as he recalls his traumatic childhood experiences.

Rasmussen, a Danish radio-documentarian, teaming up with a Copenhagen-based animation studio, Sun Creature Studios, concocts a layered, delicate, personal story that is as haunting and powerful as any live-action narratives and documentaries about war and the refugee crisis in the last couple of years, such as Fire at Sea, Human Flow, The Load, Quo Vadis, Ida and Limbo.

Flee owes a lot to Ari Folman's groundbreaking autobiographical animated documentary, Waltz with Bashir, about Sabra and Shatila Massacre, and Marjane Satrapi's Persepolis, from the perspective of her Iranian upbringing. Like with Bashir and Persepolis, Flee uses animation to elucidate one's memory.

But if the former are culled from the directors' own life experiences, subjects who were willing to express themselves as artists in a specific medium, the latter is using the medium to give a distance from its introverted subject: Rasmussen thought that in telling a story of his shy, refugee friend since middle school, using animation was a good way to provide him a buffer and anonymity.

With muted colors, simply but functionally rendered style only the Scandinavians can offer (overseen by animation director Kenneth Ladekjær, characters storyboarded by Simon Rouby then animated by Gilles Cuelier) balances out perfectly with a very heavy subject. Flee draws on highly subjective and personal memories of war, using both figurative and more abstract style to depict them.

Flee is about a young Afghan boy, Amin, who liked to run around in his sister's dress, embroiled in Afghan conflict in the late 80s -- Taliban's take-over of the country as Soviet troops retreated. Amin's father, who was an intellectual and deemed a threat to Taliban, one day got arrested and disappeared, and his aging mother and siblings had to flee the country and to go to the West.

Some of Amin's traumatic memories and secrets were never revealed to anyone before, especially about his family and him being gay. It all comes out in the interviews his friend Rasmussen conducts, a casual interviewing method where subjects are lying down, like in a therapy session.

So the preliminary interviews with Amin stayed intact in the film, with the subject's real voice. Flee moves freely in and out of those interviews, making temporal leaps as Amin recalls his painful memories and, at times, memories that are hard to articulate in words.

Amin's mother and his siblings took a plane out of Kabul on the eve of Taliban takeover and landed in Moscow, the only destination that accepted their tourist visa. This is the time when the Soviet Union dissolved and was in complete chaos. Corrupt cops were shaking down anyone for money and abusing its frightened citizens.

Amin's oldest brother, then living in Sweden, arranged an apartment for them to stay in and sent money for them to get the smugglers to cross the border to the West. The smugglers turn out to be the worst people in the world, as bad as corrupt Russian cops.

Their words took root in Amin's brain forever: "When you get to your destination, tell them you don't have a family, that they are all dead." This was the only sure way to get a refugee status. And this is what Amin would later tell anyone, even to his closest friends.

Two sisters went first, trapped in shipping containers for months with 60 other people off the coast of Sweden in the Baltic Sea. The experience was so traumatizing, they can't even speak about it to this day.

Marooned in Russia with threats from cops to deport them back to Afghanistan, Amin, his older brother and his mom takes off again, leaving their fate in the hands of vicious, inhumane smugglers. After crossing the snowy border and a boat ride, witnessing human miseries everywhere, they get captured by the Estonian coastguards and end up in a refugee camp where nothing works. Time stand still; after many months, they are given two choices: either rot in an Estonian refugee camp forever or go back to Moscow.

Flee is accompanied by some 80s and early 90s newsreel footage of the post-USSR world, of the horrendous human suffering in captured refugee boats and crowded refugee camps, and it reminds us, once again, how the West and its media devoted too little time and attention to the humanitarian crises at hand, same as today.

Marooned for what seems to be forever in Moscow, it lends some time for some tender moments as Amin discovers his sexuality, however repressed his was, accompanied by the opening of the first ever McDonald's in Moscow and its creepy celebration with the real news footage.

After many years in Moscow, they decide that it will be Amin who should be first to go: this time, with the more expensive smugglers route. Leaving behind his mother and older brother, Amin is instructed by the smuggler that he has to rip off his fake Russian passport as soon as he gets to the West and declare his family dead. He finally gets to Copenhagen; it's the wrong destination, but a Western city in a Western country nonetheless.

There are many touching moments, but I teared up when young Amin asks the attending doctor in Copenhagen if he could get a medicine to cure his attraction to men. Coming out as gay to his supposedly conservative Afghan family later on is another tender, heartbreaking scene that really struck me.

Flee is an intimate, compelling account of a refugee story and a beautiful coming of age story told in a friendly, easier to digest way, via animation. But it's an important reminder that there are thousands of stories like Amin's and the refugee crisis hasn't really ever stopped, if not vastly intensified with the whole world in sociopolitical crises for the past decades.

Do you feel this content is inappropriate or infringes upon your rights? Click here to report it, or see our DMCA policy.
AnimationDenmarkDocumentaryJonas Poher RasmussenAmin NawabiDaniel KarimyarFardin MijdzadehMilad Eskandari