DOC NYC 2021 Review: ONCE UPON A TIME IN UGANDA, The Unlikeliest Success Story In Action Cinema 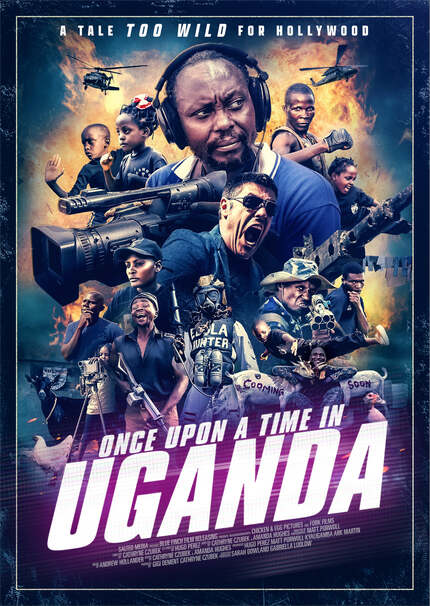 The greatest cinematic surprises often come from the unlikeliest beginnings. In the case of Cathryne Czubek's Once Upon a Time in Uganda, those beginnings are the slums of Wakaliga, Kampala, Uganda. The humble origin story of Wakaliwood and its ever expanding reach across the globe are her subject, and it's both inspirational and aspirational for the audience and its subjects, namely Ramon Film Productions founder and Wakaliwood auteur Isaac Nabwana and his number one cheerleader and liaison to the outside world, Alan Hofmanis.

When Hofmanis was shown the trailer for Nabwana's action bonanza, Who Killed Captain Alex a little over a decade ago, it sparked something in him that he needed at that moment. Fresh off a broken engagement and looking for a reason to keep moving in any direction, he dropped everything and flew to Uganda to find the mastermind behind this explosion of action movie joy and get involved. He landed in Kampala, and within a few days was ushered into the whirlwind filmmaking collective of Wakaliwood, a no budget wonderland where imagination in king, and no ideas are too big to come true, all with a budget around $200.

Once Upon a Time in Uganda follows Nabwana and Hofmanis, along with their ride or die compatriots, as they attempt to do something no one except themselves ever though possible: make Wakaliwood a player in global action film. Czubek and her team join the crew somewhere between Hofmanis' installation as a key ingredient in the productions in 2012 and their big breakthrough in 2018, giving the audience the ability to go on this wild ride with everyone.

As much as Wakaliwood's action bonanzas are love letters to the kind of balls out '80s classics like Rambo and Commando, Once Upon a Time in Uganda is a love letter to the power fo cinema to inspire and unite across all cultural lines. The film spends time not only with the two central subjects, but also with key players like Harriet Nabwana, Isaac's wife and a huge part of Ramon Film Productions, as well as the propmaster, numerous performers, as well as highlighting the challenges of shooting and marketing high energy action films in one of Kampala's poorest slums.

As much a complex love story between Isaac and Alan as a documentary about their work, Once Upon a Time in Uganda finds its way easily into the pantheon of films about films right alongside American Movie, and a film that isn't mentioned often enough, Supermen of Malegaon. The will-they-or-won't-they dynamic between Hofmanis and Nabwana and their journey keeps this from being a full on hagiography, instead allowing the audience to experience the cultural distance between the passionate white guy who believes in the power of these films, and the practical filmmaker who is still trying to put food on the table and build an industry from nothing. It's an interesting back-and-forth that makes the film better.

Those viewers who are familiar with the Wakaliwood phenomenon will definitely learn some things they didn't know. I have witnessed the world premiere of Nabwana's Bad Black and hosted screenings of Who Killed Captain Alex and others at several points over the last few years and became a believer almost immediately. But it's the complete neophytes who will really benefit most from this exploration of the power of cinema.

To many, movies are a distraction, just a way to pass the time. To Nabwana, Hofmanis, and their army of volunteers back in Uganda, they are life. To those of us who are also true believers, Once Upon a Time in Uganda is validation of our most deeply held beliefs. If you want something bad enough, you can make it happen. It's a beautiful thing, and this film is one hell of a tribute.

Once Upon a Time in Uganda

More about Once Upon a Time in Uganda