First up for the US/UK/CAN territories is a long awaited Blu-ray of Mario Bava's final feature, Shock, along with Michael Venus' Sleep, and Masumura Yasuzo's Red Angel. Only in the UK, fans will see Warren Oates in John Milius's Dillinger and Tobe Hooper's The Mangler. All of these releases are stuffed with bonus materials and defintiely worth checking out. 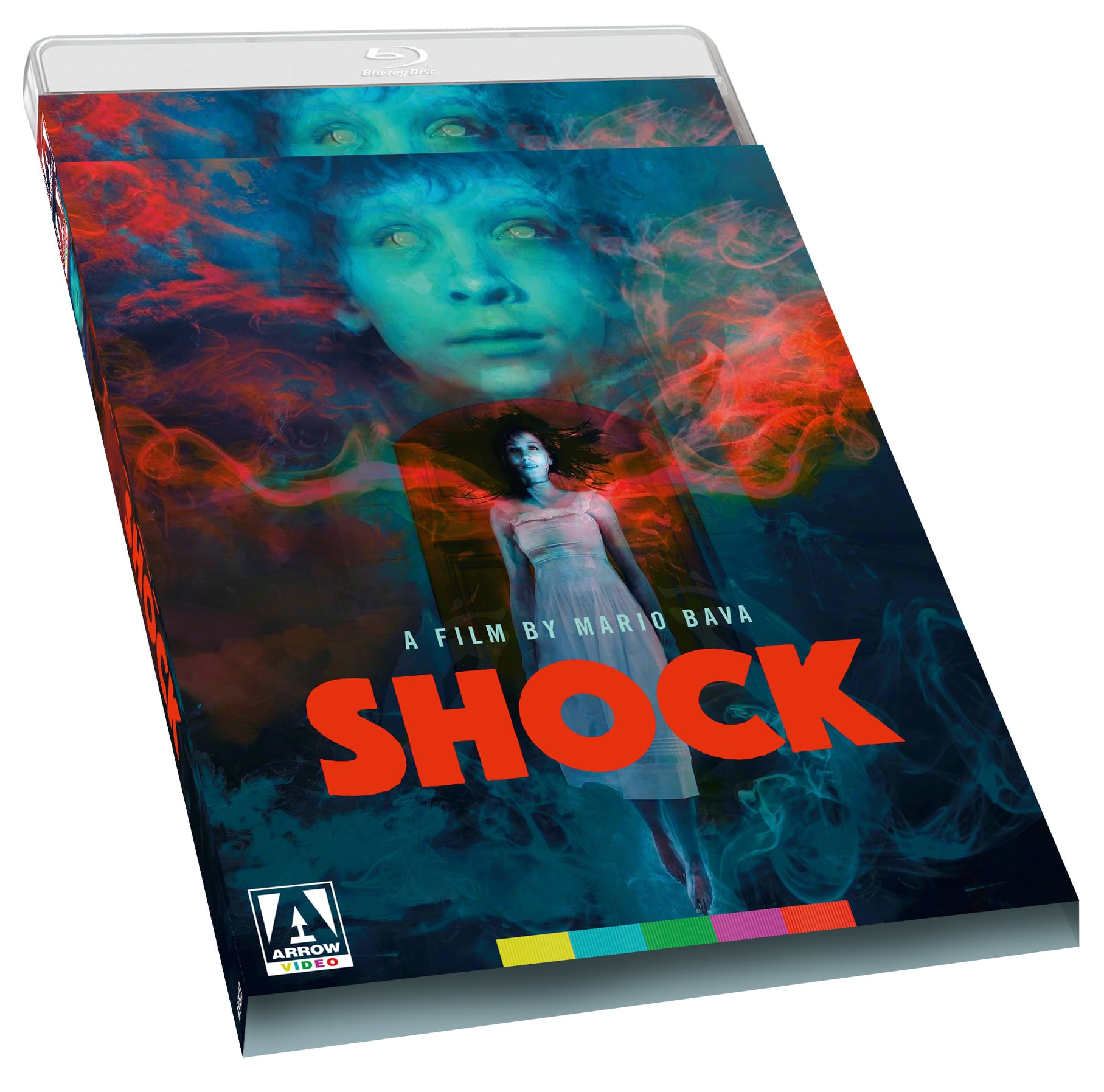 "In a career spanning four decades and encompassing virtually every genre under the sun, Mario Bava inspired multiple generations of filmmakers, from Dario Argento to Martin Scorsese and Tim Burton. Best remembered for his gothic horror movies, for his final feature, Shock, he eschewed the grand guignol excesses of Black Sabbath or Blood and Black Lace for a more intimate portrait of mental breakdown in which true horror comes from within.

Dora (Daria Nicolodi, Deep Red) moves back into her old family home with her husband, Bruno (John Steiner, Tenebrae), and Marco (David Colin Jr., Beyond the Door), her young son from her previous marriage. But domestic bliss proves elusive as numerous strange and disturbing occurrences transpire, while Dora is haunted by a series of nightmares and hallucinations, many of them involving her dead former husband. Is the house itself possessed? Or does Dora’s increasingly fragile grip on reality originate from somewhere far closer to home?

Released in the United States as a sequel to Ovidio G. Assonitis’s Beyond the Door, Shock more than lives up to its name, proving that, even at this late stage in his career, Bava hadn’t lost his touch for terror. Now restored in high definition for the first time, the Maestro of the Macabre’s chilling swansong disturbs like never before in this feature-laden release from Arrow Video.

FIRST PRESSING ONLY: Illustrated collector’s booklet featuring new writing on the film by Troy Howarth, author of The Haunted World of Mario Bava 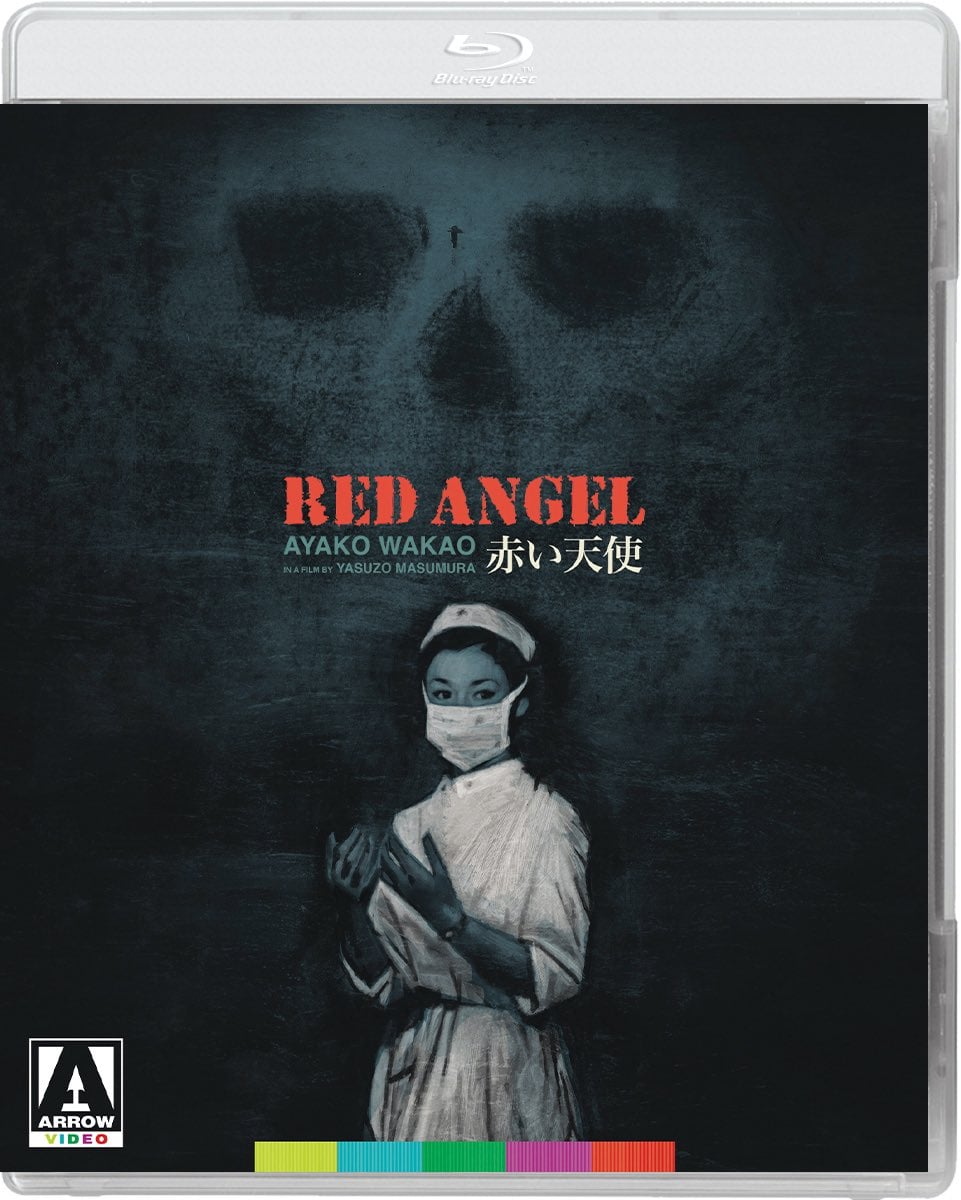 Directed by Yasuzo Masumura (Giants and Toys, Blind Beast), Red Angel takes an unflinching look at the horror and futility of war through the eyes of a dedicated and selfless young military nurse.

When Sakura Nishi is dispatched in 1939 to a ramshackle field hospital in Tientsin, the frontline of Japan’s war with China, she and her colleagues find themselves fighting a losing battle tending to the war-wounded and emotionally shellshocked soldiers while assisting head surgeon Dr Okabe conduct an unending series of amputations. As the Chinese troops close in, she finds herself increasingly drawn to Okabe who, impotent to stall the mounting piles of cadavers, has retreated into his own private hell of morphine addiction.

Adapted from the novel by Yorichika Arima, Masumura’s harrowing portrait of women and war is considered the finest of his collaborations with Ayako Wakao (A Wife Confesses, Irezumi) and features startling monochrome scope cinematography by Setsuo Kobayashi (Fires on the Plain, An Actor’s Revenge). 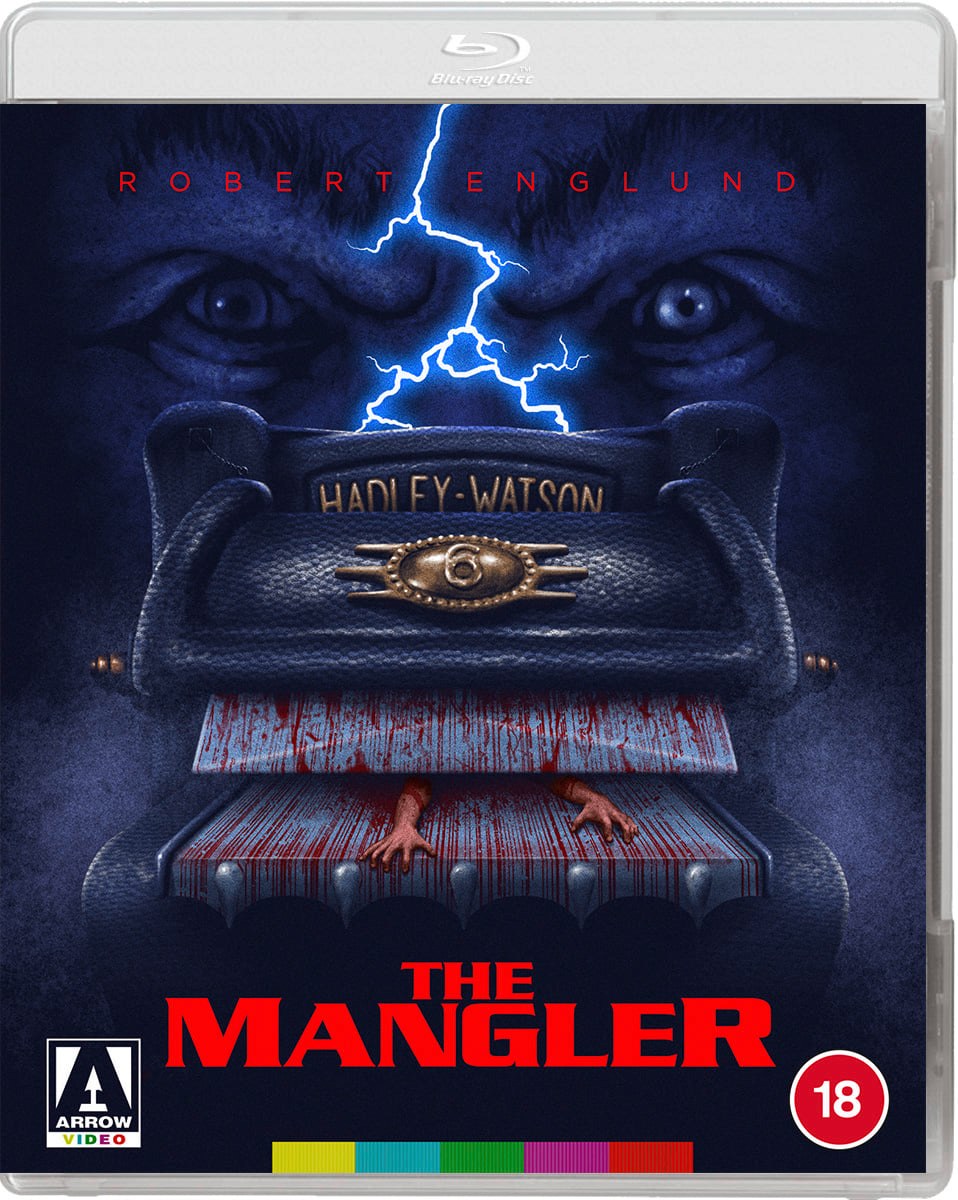 IT WILL SCARE THE SHEET OUT OF YOU!

Master of Horror Tobe Hooper (Texas Chainsaw, Salem’s Lot, Life Force) returns to the works of Stephen King with this baroque and blackly comic adaptation of The Mangler.

When a worker at Gartley’s Blue Ribbon Laundry is pulled into the titular laundry press and folded like a sheet, police officer John Hunton (Ted Levine, Silence of the Lambs) is called to investigate. Was it an accident, or is something more sinister going on? As more deaths and injuries occur under the watchful eye of owner Bill Gartley (Robert Englund), Hunton, with his demonologist brother-in-law Mark Jackson (Daniel Matmoor) come to believe the machine might be possessed, and the town itself to be hiding a much deeper secret.

Like an EC horror comic come to life, The Mangler is bold, brash and politically aware as Hooper once again points his camera at the American Nightmare, this time turning it on the bloodthirsty machinery of capitalism itself! 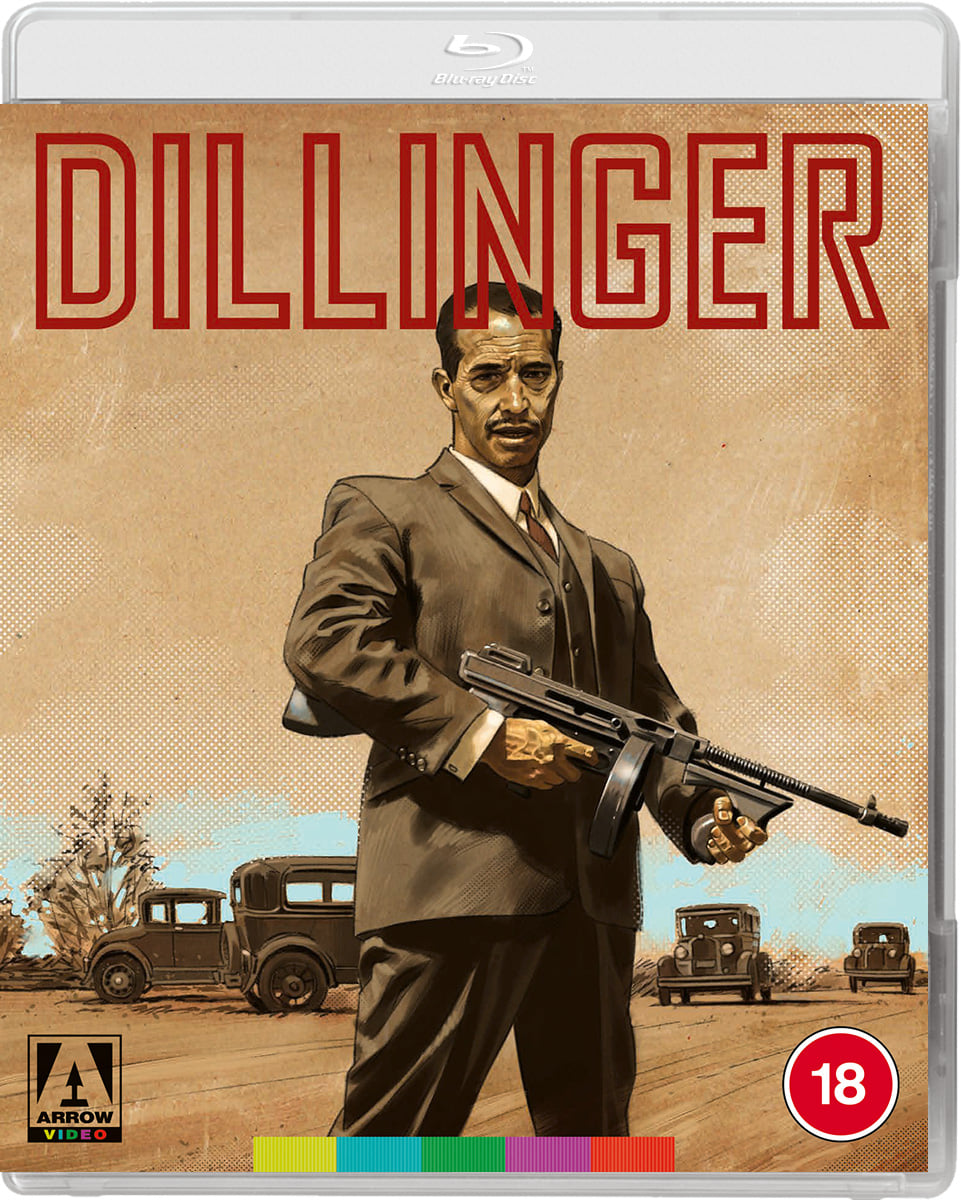 The runaway success of Bonnie and Clyde in 1967 proved massively influential: it made stars of Faye Dunaway and Warren Beatty, introduced a new form of violence to the movies, and inspired a stream of imitators, including Bloody Mama, Martin Scorsese’s Boxcar Bertha and the directorial debut of John Milius, Dillinger.

Milius presents John Dillinger as an almost mythical figure, tracing the rise and fall of the depression era’s Public Enemy Number One as he takes on the banks and the G-men, led by the infamous Melvin Purvis.

Starring Sam Peckinpah favourites Warren Oates and Ben Johnson as Dillinger and Purvis, and with a supporting cast including Harry Dean Stanton, Richard Dreyfuss and Michelle Phillips of the Mamas and the Papas, Dillinger is a top-drawer gangster picture: explosive, stylish and hugely entertaining.

WHO PROTECTS YOU WHEN YOU SLEEP?

Nightmare and trauma. Fear and repression. Guilt and atonement. Weaving together the emotional violence of horror with the cryptic motifs of German folk and fairy tales, Arrow Video is proud to present Sleep, the debut feature from a major new talent in world cinema.

Tormented by recurring nightmares of a place she has never been, Marlene (Sandra Hüller, Requiem) cannot help but investigate when she discovers the place is real. Once there, she suffers a breakdown and is admitted to a psychiatric ward. Determined to discover what happened to her, Mona (Gro Swantje Kohlhof), her daughter, follows and finds herself in Stainbach, an idyllic village with a dark history. What is it that so tormented her mother, and the people of Stainbach? What is the source of the nightmares she suffers? And who is the mysterious Trude that lives in the forest?

Richly conceived and confidently told, director Michael Venus draws influence from Mario Bava, David Lynch, Franz Kafka and the Brothers Grimm, but his voice is uniquely his own. As invested in substance and story as he is in style, Venus claws his way down to the roots of what haunts a people, a community, a nation and comes up screaming. “Will definitely keep you up at night” Joey Keough, Wicked Horror