Toronto 2021 Review: VENGEANCE IS MINE, ALL OTHERS PAY CASH 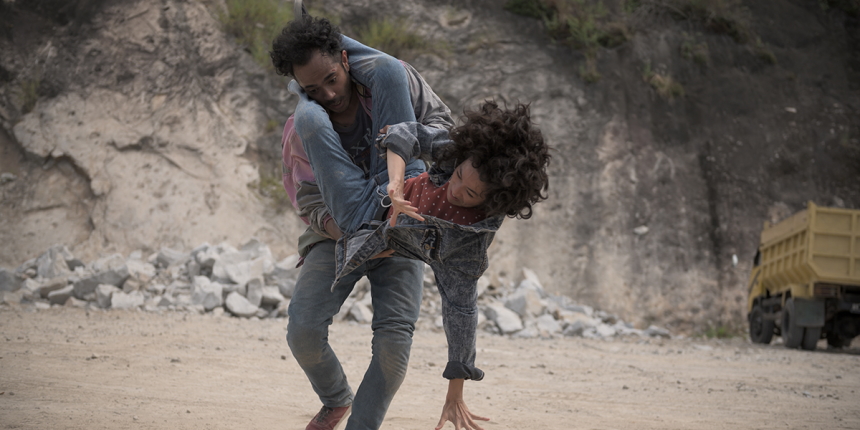 Petty gangster and entrepreneur, Ajo Kawir, cannot get it up. He channels his impotence into bravado and risk taking. He meets a girl. She knows kung fu. They fall in love. He goes to prison. She sets out on a mission of revenge on the violent criminals who caused his erectile dysfunction.

Vengeance is Mine, All Others Pay Cash has a beast of a title slapped on a middling pastiche of a film. Like early Jackie Chan films, the plot is merely a laundry-line to hang a number of scenarios and set-pieces to flutter and dance in the wind. The film gives off some serious Wild At Heart vibes, with its mixture of 'sex crossed lovers' and icky-criminal trauma, and a journey towards some kind of 'happily ever after' domestic bliss, but it cannot pull it off completely.

Part love-letter to exploitation cinema, part Indonesian art-house satire, part rape-revenge fantasy, part Hong Kong action, and yes, part supernatural ghost story -- there is a lot on the plate here, but (sadly) only half a loaf of kung fu. What is there is a lot of fun, in fits and starts. Kind of like the meet-cute of main couple, Ajo and Iteung, which involves a dust-up ballet of dump trucks, grappling martial arts, rock-crushing conveyor belts, a severed ear (Lynch again, but also Tarantino).

The film is set in the late 1980s, which it nails, from the musical stinger-cues, the endless array of cigarettes in the mouths of the hero, the villains, and the henchmen, and its rainbow hues (Ajo's purple windbreaker is sublime) captured on grainy 16mm filmstock. Some of this joy, however, is undermined by sloppy pacing, and clumsy flashback editing.

Adapted from the acclaimed Indonesian pop-cultural novel from Eka Kurniawan, in a collaboration between the author, and single moniker writer-director, Edwin, the film features a lot of jarring shifting of gears -- literally so in a bonkers slow moving transport truck chase late in the film - but narrative comes more across as a working-diary of ideas and themes slapped together. One wonders if it is the not-always-there chemistry of the leads (Marthino Lio, Ladya Chery), or simply the sprawling number of tangents in the source material that were wrangled into just under two hours. I am not sure if I wanted more, though, as nice as it was to watch this kind of endeavour on a huge movie screen at the beginning of a major film festival with a real live audience.

I appreciated the heightened melodrama, the micro movie-verse, and the rogues gallery of characters, from pouty ex-boyfriends to ex-military criminal overlords with a penchant for fishing. I loved the green tropical foliage and sweaty yellow sodium lamp hues which evoke early 1990s Christopher Doyle's cinematography, courtesy here of Kyoshi Kurosawa's regular D.P. Akiko Ashizawa. But simply too much of some things (and not enough of others) in an attempt to arouse its audience, sees Vengeance is Mine, All Others Pay Cash suffer from the kind of flaccid haze that all parties inside the film are hellbent on curing. Maybe some yoga, or motorcycle maintenance might be the thing. As the radio DJ offers at one point, "You cannot fight your way into falling in love."