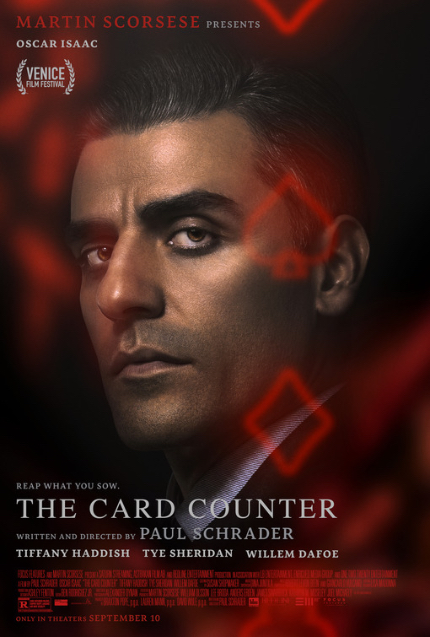 With an eye-catching title like The Card Counter, it’s more than reasonable for viewers to assume and/or expect that writer-director Paul Schrader’s (Reformed, American Gigolo, Blue Collar) latest film, an expansive, provocative existential drama, will focus primarily, if not exclusively, on the art and craft of card playing (poker or one of its popular variations), on counting cards (an analytical method of determining percentages and probabilities), and the itinerant, rootless lives of professional and semi-professional card players. That assumption, however, would be only partially, superficially correct.

When we first meet the title character, William Tell (Oscar Isaac, A Most Violent Year), he’s in classic Schrader introspective mode. Despite deliberately choosing an ascetic, monk-like life bounded by the rhythms of routine and ritual, William has a story to tell (everyone does, as he reminds us later on), but for William that story unfolds via journal writing, a long out-of-date mode of interior communication that William apparently picked up during his pre-poker-like life, and via a not-quite stream-of-consciousness voiceover narration where William shares his observations, thoughts, and, at least initially, his obsession with poker and card counting.

Like journal writing and reading philosophical tracts, William picked up his deep knowledge of cards and card counting during a 10-year bid in military prison. While the reasons won’t be spoiled here, William’s past correlates with America and American’s foreign intervention and our centuries-old obsession with remaking other countries in our own idealized, romanticized image (i.e., nation-building by another name) through the “forever wars” that rarely get the full, open, honest debate risking the lives of American men and women, not to mention, the inhabitants of the countries America has forcibly liberated, so desperately required.

Scarred and traumatized by his actions and a not-common need for punishment (“expiation” to use a religious-tinged term, again typical of a filmmaker raised in a strict, Calvinist home who transferred his metaphysical concerns onto and into film), William embraced the well-ordered, choice-free life of incarceration. For William, the end of his prison term wasn’t and couldn’t be the end of his punishment. By choice, he decided to keep human connections to a minimum, using his deep study of poker and card counting to eke an existence on the margins of society, traveling from out-of-the-way casino to out-of-the-way motel, consciously avoiding the big casinos and the risk of discovery from casino staff of his not-quite-ethical or permitted card counting activities.

To all self-abnegating routine, however, a chance encounter or an element of chaos will force some kind of change. For William, the appearance of Cirk (Tye Sheridan, Ready Player One), a twenty-something drifter streaked with bitterness. Like William, Cirk knows pain, trauma, and loss on a deeply personal level, but unlike William, Cirk wants to do something, anything to restore a fictionalized, naive view of justice and the scales thereof. Seeing something of himself in Cirk while simultaneously hoping to steer Cirk away from the life of violence that’s determined practically every choice William has made in his, William takes him under his damaged wing.

Motivation in hand, William finally agrees to a longstanding proposition by LaLinda (Tiffany Haddish), a mid-level broker who handles a stable of gamblers backed by wealthy, unseen backers. With LaLinda’s contributing to his stake, William finally emerges from his self-imposed isolation and a winning streak that brings William a certain level of notoriety along with a growing cash balance. Schrader being Schrader, however, William’s good fortune, including a burgeoning romantic relationship with LaLinda built initially on their professional relationship and later on their respective pain and trauma, isn’t bound to last nor will the cycle of violence William hopes to end by befriending Cirk and steering him towards a different life than Cirk envisions for himself.

Employing a typically minimalist style heavily influenced by the late, great French filmmaker Robert Bresson (Pickpocket, A Man Escaped, Diary of a Country Priest), one of Schrader’s cinematic mentors, The Card Counter relies primarily on close-ups or medium shots of Isaac as William in anguished, existential mode. It’s a heavy burden to put on any actor regardless of talent or dedication, but it’s one Isaac readily delivers. Isaac can play broad and he can play small. William requires a “small” performance, one filled with nuance and subtlety to emphasize his character’s roiling inner life. In turn, that makes William an indelible, unforgettable character in Schrader’s pantheon of troubled outcasts, outsiders, and pariahs. 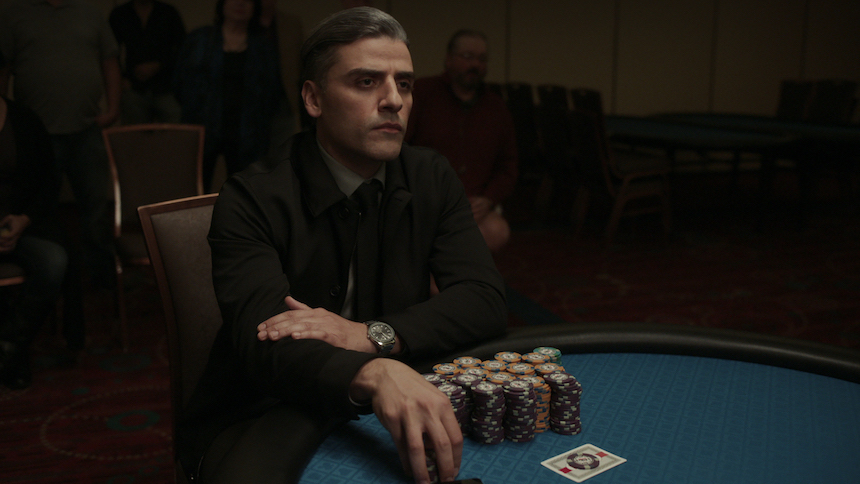 Do you feel this content is inappropriate or infringes upon your rights? Click here to report it, or see our DMCA policy.
Oscar IsaacPaul SchraderThe Card CounterTiffany HaddishTye SheridanUSWillem DafoeActionDramaThriller