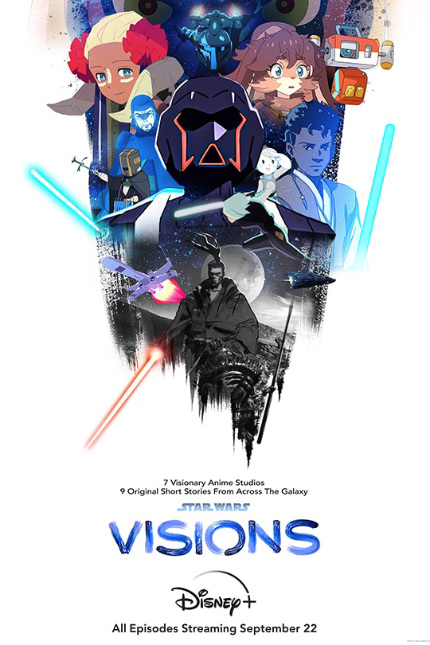 George Lucas drew from many sources of inspiration when he sat down to write his own version of a space opera in the 1970s, including the films of Kurosawa Akira. Now the children of his children have drawn upon the Star Wars films to make their own version(s) of Star Wars, nine times over.

Seven studios were authorized to make animated episodes in an anthology, set in the Star Wars universe, but reportedly with no restrictions on when or where they might relate to the 'official' timeline: Kamikaze Douga, Studio Corrido, Trigger, Kinema Citrus, Production I.G., Science Saru and Geno Studio. Nine episodes were produced, and they are all varying levels of fabulous.

I hesitate to break the episodes down too precisely, since the great joy for me came from all the surprises that unfurl in each episode. The running time varies from 13 to 20 minutes, which allows for the setting to be introduced -- without an opening crawl, and mostly without voiceover narration -- followed by a conflict of some sort, some furious action, and then a conclusion to the episode, mostly left open-ended, so that each of the stories could (theoretically) be continued in a future season.

Watching all nine episodes that were provided in advance, I was struck by the great variety of styles, as far as the art and the storytelling. I sampled a couple of episodes in the original Japanese language, but mostly I watched the English-language dubs, which I usually avoid. In this season's selections, however, the voice actors include David Harbour, Joseph Gordon-Levitt, Karen Fukuhara, Kimiko Glen, Simu Liu, Neil Patrick Harris, Lucy Lie, Alison Brie, Henry Golding, Jamie Chung, Kyle Chandler, and George Takei, so I couldn't miss the opportunity to enjoy that vast array of talent in voice acting. The Japanese-language versions were equally compelling.

Of the variety of styles, I loved the first episode, The Duel, which is a samurai tale in black and white, accented with primary colors to highlight all the future tech that is meshed in together. Tatooine Rhapsody switches gears immediately, following a rock band on the run in a smash-em-up vibe of vibrant colors, with Temuera Morrison as Boba Fett.

And yes, I noted that I did not want to give any surprises away, but there's more 'traditional' anime (or maybe just North Americans might expect), an episode that reminded me of Astro Boy, and much more. And I'll stop there.

Star Wars: Visions is a great warm-up to fall anime season, and it also a compelling reason to subscribe to Disney Pus, even if you just subscribe for one month. I'm looking forward to watching each episode again, and savoring the delectable twists and turns that inspired filmmakers have built into their stories.

Really, this may be the best Star Wars-related visual entertainment I've seen since 1980.