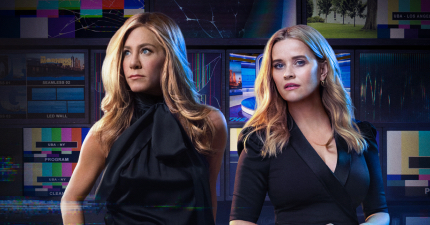 Wake up to a new season of developing character twists and turns.

The Morning Show
All 10 episodes of the first season are now streaming on Apple TV+. The 10-episode second season will premiere with the first episode today (Friday, September 17), followed by one new episode weekly, every Friday through November 19. I've seen all 10 episodes.

Announced as one of the first two scripted programs for Apple's streaming service, even before it was officially dubbed Apple TV+, The Morning Show premiered in November 2019, along with several other series. As it happens, I got an Apple iPad around that time, which included a free 12-month subscription to the service, and this is the show that initially caught my attention.

Watching an hour-long episode on any device is not ideal, so I was slow to warm up to what the series was endeavoring to accomplish. (Full disclosure: this is one of many shows that is over peppered -- for my taste -- with foul language, which always serves as a personal distraction.) The wealth of fine performances overcame the more wearisome, melodramatic, self-important dramatic elements; I found myself watching to enjoy what Jennifer Aniston, Reese Witherspoon, Billy Crudup, Mark Duplass, Karen Pittman, Bel Powley, Steve Carell, and, especially Gugu Mbatha-Raw were bringing to their characters, even if their characters were not always likable.

The environment of a morning television show is ripe for drama, in part because it is a worldwide habit for many people, wherever you live and in whatever form you favor, and so curiosity about what really goes on off-camera abounds. Drawing from Brian Stelter's book Top of the Morning: Inside the Cutthroat World of Morning TV, first published in 2013, the first season, developed by Kerry Ehrin (Bates Motel), followed what happens after Mitch Keller (Steve Carell), longtime co-host of the fictional "The Morning Show" on the fictional UBA television network, is fired amidst allegations of sexual misconduct.

Alex Levy (Jennifer Aniston), Keller's on-air partner, soon preemptively announces Bradley Jackson (Reese Witherspoon) as Keller's replacement, which sets in motion a series of stories that are both compelling and enlightening about the morning television show business, exploring the rippling effects upon a fascinating set of obviously flawed characters.

Again, the performances were what raised my interest and kept me watching. That's what happens with most good episodic television shows, especially those that are presented on a weekly basis; it's less, 'what's going to happen next?' and more 'what are they going to do about it?'

The first season came to a conclusion that left the fates of Alex Levy, Bradley Jackson and company in question, as Alex and Bradley sounded disturbing alarms about the culture that had developed around the show. The second season begins in the moments afterward, which piques the interest of anyone who saw the first season, and then the series hits *pause*, moving forward to the eerily empty streets of Manhattan, and hitting *reverse* to rewind events to three months earlier, i.e. late December 2019.

It's a bit confusing to start the season in that manner, but after watching it twice now, I see the benefits. The reset allows new viewers to jump into the show without necessarily feeling that watching all 10 episodes of the first season are required.

Those first 10 episodes are really good, though, so if you can catch up first, that's a better way to go. In large measure, that's because the second season dives deeper into the lives and viewpoints of the leading characters to consider more closely how they have survived and adjusted their lives to the wreckage that was incurred over the first season, and how they deal with new wreckage that pops up in surprising twists.

The narrative is fine for what it is, as manufactured and manipulative as it sometimes proves to be. What continues to draw me, however, are the characters. Kerry Ehrin and the other writers and producers have given careful thought to how some people have made changes, or are endeavoring to do. Other people, however, have regressed, sinking deeper into their own negative traits that have been affected by the work that they do and their working environment, which may not be terribly healthy for anyone who is seeking to make their own mark upon the world.

These changes do not always reflect well upon individual characters or their likability from an audience standpoint, reminding me, at certain moments, of the changes in Alan Alda's portrayal of Hawkeye Pierce in television's MASH, who transformed from a wisecracking wiseguy to someone who was cracking up as he became more aware of his own faults and limitations.

Very much presenting an insider's perspective, The Morning Show at times labors to remain relevant and relatable. It doesn't always succeed, sometimes becoming overwrought and self-indulgent to an excessive degree. More frequently than not, however, the show fires on all cylinders, and it's a marvel to behold.