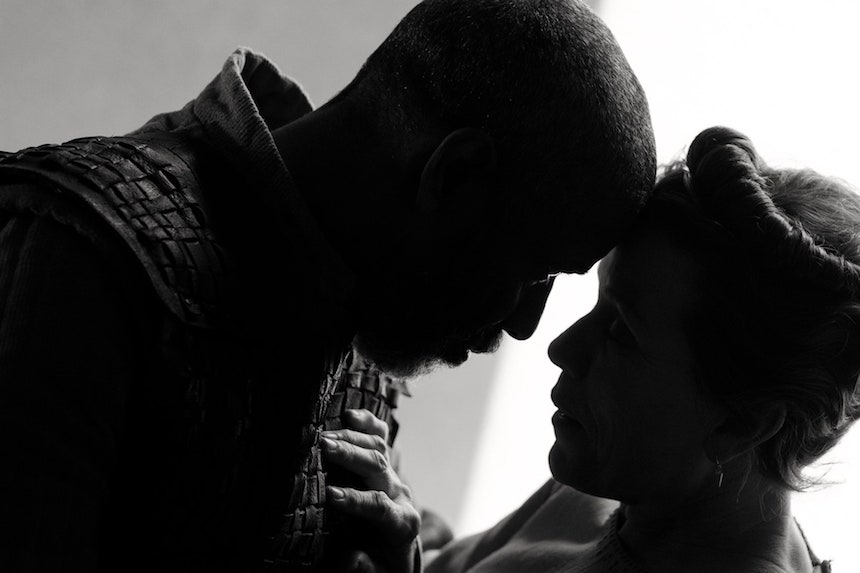 With The Tragedy of Macbeth marks the solo outing of Joel Coen as a director, one half of the brothers team behind such classics as No Country for Old Men and A Serious Man. It stars indomitable Denzel Washington as the ambitious, murderous Scotsman and the great Frances McDormand (also the director's wife) as the Lady M. With great ensemble of the British, Scottish, Irish and American actors, including Brendan Gleeson, Corey Hawkins, Bertie Carvel and Kathryn Hunter, I have to say, acting in this is fantastic.

But there have been many famous screen adaptations of the Shakespeare’s play before this reiteration. So the first question anyone would naturally ask is, is another adaptation of the famous Scottish play really necessary? Most recently we had a sexy, action packed version directed by Justin Kurzel and starring Michael Fassbender and Marion Cortillard that no one saw.

Macbeth and Banquo (Bertie Carvel) return after victorious battle over invading Norwegian forces, then encounters witches (?) in the forms of crows. They instill the ideas in the returning warriors that Macbeth will be king and Banquo's offspring will take over the throne down the line. The rest of the film is predicated on that foretelling and Macbeth acting upon it. From the get-go, Lady Macbeth is all over the idea of killing off King Duncan (Gleeson). But after the deed is done and Macbeth assumes the throne, they get increasingly paranoid with guilt, with imaginary approaching heavy steps and bloodstains that never washes away. Sleep no more. Macbeth can never rest easily.

There is nothing wrong with Washington and McDormand's acting, eschewing the bard's juicy monologues with gusto and ease. His greying hair and beard and her wrinkles give their performances more edge, accentuating the aging couple's desperate last shot at glory. But it's Kathryn Hunter who steals the show. She portrays the manifestation of three witches. Her contortionist body movement and cadence of her gravelly voice in the beginning sets the uneasy tone of the whole film.

Shot in black and white in academy ratio, it is closer to filmed stage play than a cinematic adaptation. Its German expressionism inspired, minimalist set design and CGI fog and a murder of crows come across as cheap. And digital cinematography (nonetheless shot by usually great DP Bruno Delbonnel) looks extremely flat and surprisingly uninspired.

Unfortunately, there is nothing special about Coen's directing: there are no battle scenes, the weird vibe has been done much better both in Polanski's and Welles's version as well as in Kurosawa's Throne of Blood. It's as if Coen couldn't decide what direction he wanted to go and took the most boring, lazy route. The result is boring, flat adaptation with hodge-podge styles from other classic period pieces, as if Macbeth the film is wearing an ill-fitting suit.

Even any semblance of Coen-ness is only briefly found in the appearance of Stephen Root, a character actor and frequent collaborator of the brothers as Porter, a comic relief.

At best, The Tragedy of Macbeth feels like a vanity project where a director trying to please his wife a role she always wanted to play (for 15 years apparently). It also gives a clue to which Coen might be a Garfunkel of the duo.

The Tragedy of Macbeth

Do you feel this content is inappropriate or infringes upon your rights? Click here to report it, or see our DMCA policy.
Joel CoenNew York Film FestivalUSWilliam ShakespeareDenzel WashingtonFrances McDormandBrendan GleesonDramaHistoryThriller

More about The Tragedy of Macbeth