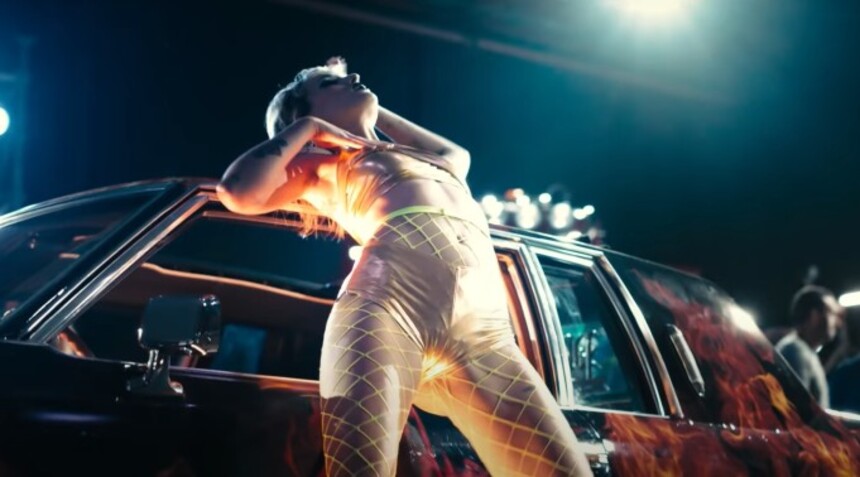 Carrie Fisher once described her body as a bag to carry her brain around. There's a book about women's health entitled 'Our Bodies, Ourselves'. We often talk about of our bodies as being separate from us, and yet they are what contain us. Some people's bodies don't match their identity; without our health, we don't have anything, so the saying goes. So how do our bodies exist, not only for ourselves, but for each other? How do we move with other objects in the world, and more importantly, with other bodies? What does a body mean in connection with another human being?

Julie Ducournau's sophomore feature Titane is a vibrant, brazen, and simultaneously a violent and tender examination of what our bodies and appearances means to ourselves and those around us. What pleasures we want from the our bodies, what other bodies (or objects) give us pleasure, and pain, and the torture our own bodies can bring us.

Alexia (the riveting Agathe Rousselle) is more than comfortable in her body, in ways that make other people decidely uncomfortable. A car accident gave her a titanium plate in her head when she was a child, which seems to have only enhanced her queer identity. The resulting scarred skin gives a swoop that reflects the curves of her body, which hides the cold, smooth metal underneath, a protection and a blade. Her body is her currency, gyrating over cars that hold far more interest for her than most humans.

And no wonder: it doesn't seem like she has had much genuine love. We barely encounter her mother, and it would seem that her father sees something in Alexia that he hates and fears. Alexia might know what her own body wants, but she doesn't seem to know what other bodies want; hence her often extreme reaction to affection both wanted and not, and her awkwardness with her first lesbian encounter. To say that Alexia's reactions are extreme is perhaps an understatement, but as extreme and outrageous as they are, there is nothing that feels illogical. Ducournau knows how to steer her boat.

In Titane, everything is gay and wet and french and on fire*. Wet with sexual desire, wet with saliva, wet with motor oil; fires, metaphorical and literal, deliberately set, unconscious burning without end. What is conspicuous in its absence is water to put out the fires, both metaphorical and literal. The gaze starts as female looking at the male gaze looking at the female body; well, really, it's a queer gaze, one that asks us to look on the bodies before us as those characters experiencing their bodies. As Alexia suddenly finds her body invaded, her only reaction to the pain muct be to continue to inflict pain, to bruise that which she does not want.

As the film takes something of a shift in the second half, we're still invited to explore bodies, in this case, bodies adapting to survival and mental trauma. The sight of Vincent (Vincent Lindon) injecting steroids into his ass, the bruises that have come from this addiction, his own fists pouding his body: like Alexia, he is fighting pain with pain. Unlike Alexia, though, the changes in his body are arguably more purposeful, though a reaction to trauma.

There is an unexpected amount of tenderness and vulnerability; what the human body, and the human soul, needs. As Alexia leans new ways of relating to other people's bodies through Vincent, so she discovers herself, again, through her own body, even as it rebels against her. Dance scenes are frequent and signifiers: perhaps dance is our most vulnerable expression, unique to each person, and Alexia understands what men want from her body, and what she wants from it for herself.

As noted, Rousselle is a revelation; she has little dialogue, but her eyes express volumes, piercing with anger and pain and restlessness and hunger. She is a chameleon, and yet trying to face the changes that she needs but doesn't want, that which she forces on herself and what is forced upon her. This body of metal and flesh and desire has made her who sshe is, and then it becomes her prison, and then later then, briefly, her salvation. Lindon has been a cornerstone of French cinema for years, but his acting in this is far beyond anything he's done before, pushing the boundaries of his own body is ways rarely explored in male characters, which a raw honesty that breaks your heart.

Titane is a spitfire, no-holds-barred, astounding, sexy, tender, freakish, cinema of the grotesque: a discordant symphony of metal, muscle, ripe flesh, blood, oil, and anger. It is the bonfire and the gentle flame, the fist to the face and the loving arms wrapped around you. It will boggle your mind and break your heart.

*To steal a quote from Patton Oswalt when he talked about Cirque de Soleil.