Directed by Ira Deutchman, the documentary is a briskly informative celebration for anyone who loves independent and international cinema. 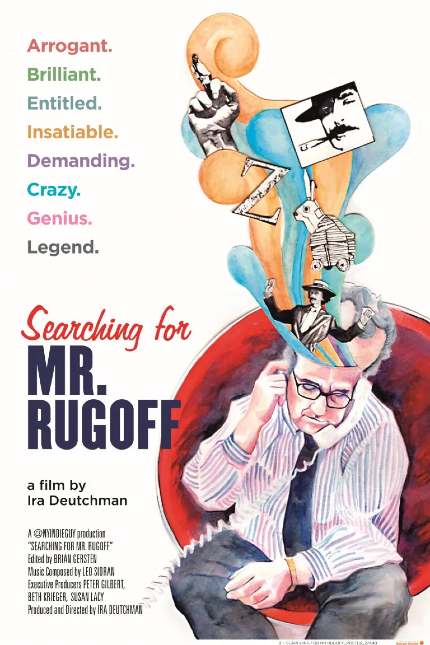 It's not "rug off." Pronounced "roo-goff," he was a key figure in the U.S. independent film scene and helped to spread the gospel on international cinema.

Searching for Mr. Rugoff
In the spirit of Donald S. Rugoff, all proceeds from the release will be donated to the not-for-profit art house theaters presenting the film across the country. To see if the film is playing at theater near you, visit the official site.

In my late teens, I began watching as many movies as possible.

Since I lived in Los Angeles during the late 1970s and owned an automobile, many options were available to me. By the time I moved to New York a few years later, however, I had already missed the Mr. Rugoff era, when Donald G. Rugoff ran an influential theater chain and film distribution company in New York City.

Independent filmmaker Ira Deutchman, who has been making, marketing, and distributing films since 1975, worked for Mr. Rugoff's company, Cinema 5, for three years at the beginning of his career. A speech by one of Mr. Rugoff's former competitors sparked Deutchman to investigate why Mr. Rugoff had become generally forgotten in recent years, which is surprising in view of the significant work he had done in the past.

His documentary begins as a personal journey, quickly morphing into an absorbing exploration of how Rugoff came to be such an influential figure. He inherited ownership of independent film theaters in New York City at a young age in the 1950s, when the major studios in Hollywood were becoming increasingly disenfranchised from the public at large, who were increasingly distracted by the greater availability of television and the pressures of raising their families and making a living.

The Baby Boom Era had a profound impact in the U.S. and younger people wanted to remake mainstream culture in their own image, which affected all aspects of modern life, including movies. In that time period, the French New Wave, the Italian Neorealists, and other European films, especially, began to break through into American hearts and minds. Mr. Rugoff helped spur the movement toward more challenging cinema by booking and then cannily promoting the films with a salesman's eye.

His clever marketing campaigns on behalf of the films he booked led to good, then great success at the theaters he owned, which he also refashioned and redesigned into tiny palaces, smart updates on the classic style of Hollywood movie palaces that had dominated movie-theater architecture for decades. Over time, he decided to break into film distribution, which led to his championing of brazenly different filmmakers (like Lina Wertmuller) and documentary films, which had rarely been splashed on big screens before his time.

Deutchman pulls no punches in talking about Mr. Rugoff's pugnacious, problematic personality. Alongside a flow of archival footage and interviews with a slew of past employees, as well as some of his competitors in the specialty exhibition business, Deutchman also interviews Mr. Rugoff's first wife and two adult sons, who are quite open about a man who may have had spectacular artistic taste and rarely-paralleled enthusiasm for supporting unique visions, yet also lacked much social refinement. He could be ugly, truly ugly in his behavior and in his personal relationships.

His personal faults and poor business decisions led to his ouster from his own company in the late 70s, where he then discovered, perhaps for the first time, that he was reaping what he had sown, in that no one wanted to work with him anymore.

If Searching for Mr. Rugoff is, ultimately, a bittersweet tale, it's also educational in the best way possible for film enthusiasts who are still reaping the benefits of Mr. Rugoss's innovations and taste for films that are reflected today in specialty streaming services and, yes, still resonate in an era when theater-going is no longer a weekly habit for far too many people.

Do you feel this content is inappropriate or infringes upon your rights? Click here to report it, or see our DMCA policy.
Cinema 5documentaryDonald RugoffIra DeutchmanUS

More about Searching for Mr. Rugoff