Review: THE TOMORROW WAR, Death by a Thousand Algorithms 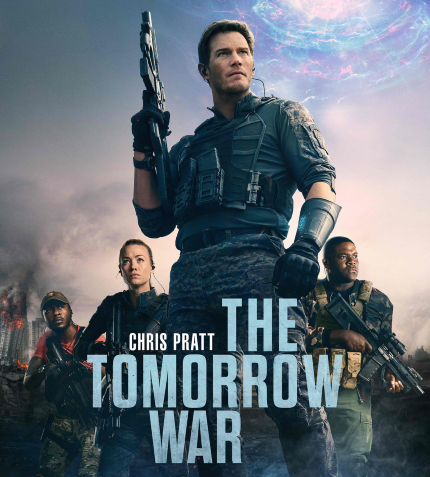 Back in January, Amazon Studios paid a cool $200M — a drop in the proverbial bucket for the all-everything company and Jeff Bezos, the wealthiest individual in the world ($200B and counting) — for distribution rights to The Tomorrow War (formerly “Ghost Draft”), after the original distributor, Paramount Pictures, decided to tap out due to the COVID-19 pandemic and theater shutdowns.

Led by actor-producer Chris Pratt (Guardians of the Galaxy, Jurassic World, TV’s Parks and Recreation), The Tomorrow War is a big-budget, tentpole-wannabe science-fiction actioner. Based on the unimaginative, unoriginal results onscreen, it was probably a wise business choice for Paramount to take Amazon’s money and move on to the next blockbuster/tentpole-wannabe.

After an all-too-brief opening scene set in 2051 that Pratt and his collaborators, director Chris McKay (The Lego Batman Movie 2, The Lego Batman Movie) and screenwriter Zach Dean (24 Hours to Live, Deadfall), promisingly set up, The Tomorrow War hits the rewind button, returning Pratt’s character, the generically named Dan Forester (Chris Pratt), to his present, December 2022. On the surface, Dan has everything he could possibly want, including a loving wife, Emmy (Betty Gilpin), an adoring worshipful daughter, Muri (Ryan Kiera Armstrong), and a gig as a biology teacher in a local high school that somehow allows him to afford living in a comfortable, Spielberg-style suburban home on a clean, well-lighted street.

That’s not enough for Dan, though. In what becomes The Tomorrow War’s overarching idea, Dan’s dreams for himself (i.e., a research gig with a private company), run into the reality of a capitalistic society that places little weight on an ex-veteran’s service for his country.

Before Dan can sulk at coming in second for his dream gig, warriors from the future literally drop into a World Cup match. After a spectacular light-show, a future warrior throws down a literal gauntlet for the world’s inhabitants: Aliens have all but wiped out humanity in 2051, necessitating a last, desperate bid to win a seemingly non-winnable war by recruiting — and later, with the Earth’s governments in complete agreement — conscripting soldiers (admittedly a fascinating idea, but one barely touched on here), trained and untrained alike, from the (their) past.

Dan avoids recruitment for a while, but eventually, the draft board calls his number. With survival rates for future war veterans incredibly low (20% after just a 7-day stint in the future), Dan has little hope of returning to the former life he took for granted, either alive or scar-free.

That’s a lot of build-up and exposition for a film that takes the better part of an hour to finally send Dan and several dozen, disposable recruits, including Charlie (Sam Richardson, Werewolves Within, Veep), a research scientist with zero military training who doubles as comic-relief/sidekick, and Dorian Ryan (Edwin Hodge), a three-tour veteran with the thousand-yard stare of a man who prefers the certainties of war to the uncertainties of civilian life, to a bleak future where the human population (500K at one point) continues to drop precipitously. After barely surviving the first encounter with the quadrupedal, tentacled aliens, dubbed “white spikes,” Dan allies himself with a senior commander/researcher scientist (Yvonne Strahovski), to find a means of destroying the aliens by any means necessary.

Borrowing ideas wholesale from better, more imaginative works like The Terminator, Aliens, Starship Troopers, War of the Worlds, and Edge of Tomorrow (Live.Die.Repeat), The Tomorrow War rarely feels like something we haven’t seen before, mostly because we have, often in better, more exciting form crafted by ultra-competent, self-assured filmmakers. With a long windup, a mid-film action bubble pitting a dwindling supply of soldiers vs. the voracious aliens, and an overlong, over-indulgent return to Dan’s present day, The Tomorrow War defenestrates conventional three-act structure out of the proverbial window, in turn embracing five- or even seven-act structure, all of which suggests The Tomorrow War would have been better served as a streaming miniseries where story, character, and themes (family, as always, at the center) could have been given a chance to develop more naturally, more organically.

Instead, the result, while mostly watchable, never reaches the heights of its well-known, familiar predecessors. Then again, Pratt and his collaborators seemed content to deliver a film heavy on big, if often underwhelming, action scenes, a handful of “cool,” if derivative, ideas, and Pratt’s quip-heavy, everyman persona.

Pratt the producer also gave Pratt the actor a chance to sincerely emote, especially when Dan’s working on his relationship issues in the middle of an ongoing apocalypse, though it often rings, if not false, then surface-deep like so much else concerning The Tomorrow War. 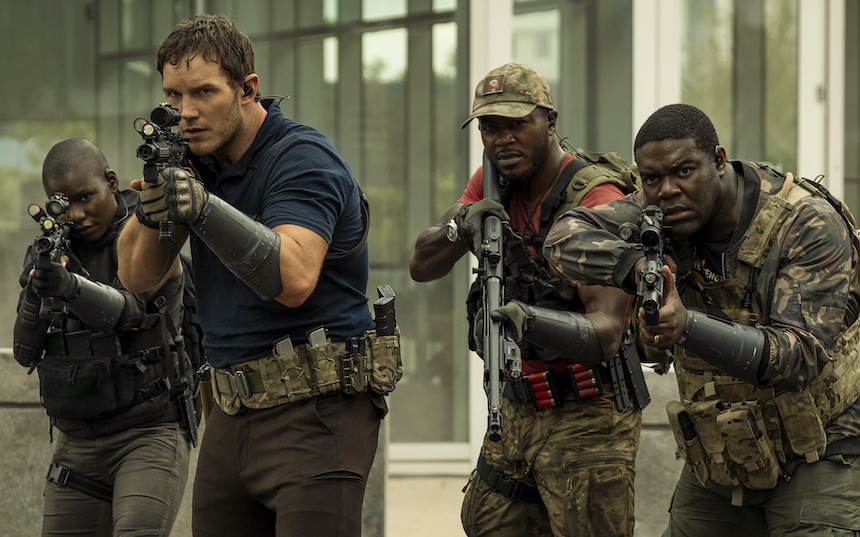