Directed by Hogir Hirori, the gripping documentary peers into the real-life rescues of young women from sexual slavery. 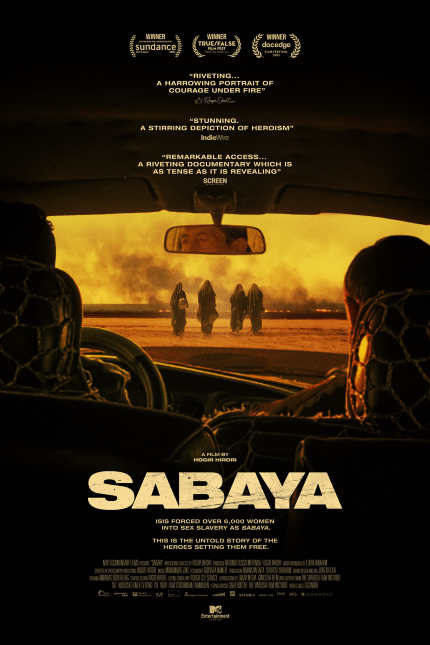 Hold onto your sisters and your daughters, tightly.

Sabaya
The film will open in theaters in New York (Film Forum) and Los Angeles (Laemmle Royal and Laemmle Pasadena Playhouse) on July 30, followed by a nationwide expansion in theaters and virtual cinemas on August 6 via MTV Documentary Films. Visit the official site for more information.

The opening scenes play like a thriller, featuring a hidden, mysterious goal as several vehicles stealthily move into a remote camp at night.

Once the vehicles have reached their objective, we can sense and see that they are searching for something, and then the focus begins to sharpen as their 'search item' is revealed: a young woman, scared and sobbing, not quite believing what is happening to her.

Telling the true story of hundreds of young women who have been kidnapped from their homes and then held in captivity as they are subjected to rape, repeated beatings, and all manner of verbal abuse, Sabaya swiftly establishes the low-key yet determined and intense protagonists, a small group of people who are endeavoring to rescue the (literally) hundreds of women who have been stolen away from their lives, leaving behind their homes and their families and their innocence. It is not easy to watch, mostly because it is nearly impossible to watch and not become infuriated, or, possibly, enervated, simply because we know that the film only provides a small slice of the dreadful reality that the people involved have been experiencing for (literally) years.

Unlike a fictional thriller, the film follows what happens to the young woman, called Leila, after she is rescued. It is abundantly clear that she has been traumatized to the nth degree, to a point that is shattering to witness. And we carry the knowledge that this ruthless, vile treatment has happened over and over again, and that many young women did not survive long enough to be rescued, or to avoid further abuse after their return and meeting the sometimes inhospitable, disrespectful, or disdainful reunion with what extended family members may offer.

Then the film moves on to the next victim and attempted rescue, and the next, and the next, each time spending necessary minutes that pass quickly, revealing more aspects to the horror and a consequent slow rise in anxiety and apprehension, while comparing and contrasting the risky nighttime rescue attempts, from people who are members of ISIS, with daily life in a compound where the Yazidi Home Center is located. The Yazidi are an ethnic minority who have been persecuted for their religious beliefs by ISIS, who have kidnapped the young woman.

The real-life heroes look to be entirely ordinary people, based only on their outward appearances. They calmly carry out missions without fireworks exploding, though emotions occasionally overflow in frustration and anger. Called 'the most dangerous refugee camp in the Middle East,' the camp does not look that frightening, until one considers all the guns and the zealotry that have inspired such activities.

Directed, shot, and edited by Hogir Hirori, the documentary is a sobering experience, one that remains gripping from beginning to end. Many questions are raised and most remain unanswered, leaving the viewer to wonder why these things keep happening in the cover of darkness, and wondering if such nerve-sapping tragedies will ever end.

Do you feel this content is inappropriate or infringes upon your rights? Click here to report it, or see our DMCA policy.
documentaryHogir HiroriIraqMiddle EastMTV FilmsSwedenSyria