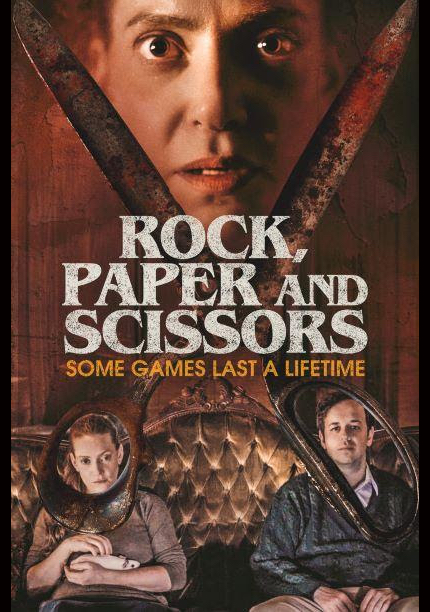 The family that stays together may kill each other.

Rock, Paper, and Scissors (orig. Piedra, Papel y Tijera)
The film is available on digital and On Demand via Dark Star Pictures as of July 6.

"There's no place like home!" declares Dorothy in The Wizard of Oz (1939). If you believe that, I now know three people who are more than ready to dissuade you of that belief.

After the death of her father, professional actress Magdalena (Agustina Cerviño) comes home from Spain to her family's multi-story house in Argentina. Warmly greeted by her older half-siblings Jesus (Pablo Sigal) and Jose Maria (Valeria Giorcelli), Magdalena expresses gratitude for how they cared for their father in his last months, even though it is clear that she harbors troubled feelings about her family, based on her own childhood. She intends to stay for two weeks in order to settle the estate and then return to Spain.

Before 24 hours have passed, she falls down a flight of stairs and becomes confined to bed, where she finds herself held against her will by her siblings. Magdalena is not happy, to say the least, and it's entirely understandable: her half-sister Jose Maria is emotionally unbalanced and her half-brother Jesus is disturbingly clingy toward his sister and half-sister.

What transpires thereafter is grueling and harrowing to experience. Since Jose Maria is wont to fly off the handle at the slightest misunderstanding or misperception or misplaced word, Magdalena must continually attenuate her feelings of fury, restraining herself over and over again, since she has been disabled by her fall, which she quickly concludes was instigated by Jose Maria.

Aspiring filmmaker Jesus is no better a brother. He is infuriating in his passive aggressive behavior, as he constantly insists he is doing everything possible to help Magdalena, even as he resists doing anything to truly help her.

In their feature debut, directors Martín Blousson and Macarena García Lenzi construct a very tight thriller that is not dependent upon anything other than their own imagination, and ours, as the audience to respond. The narrative draws the story ever tighter, bound by ropes of inevitability.

Framed tightly and, dare I say, exquisitely, the shots soon compose a nightmare, very occasionally leavened with home-video footage from (supposedly) Jesus' attempt at his own twisted version of The Wizard of Oz, which is revealed to be a dark vision from Hell. The three central performances are very strong and bolster an atmosphere of anguish and frustration.

As an intimate, three-hander family drama, Rock, Paper, and Scissors is certainly not a pleasant experience, nor is it meant to be. It is an indelible nightmare that may discourage you from ever visiting home again.

Do you feel this content is inappropriate or infringes upon your rights? Click here to report it, or see our DMCA policy.
Agustina CerviñoArgentinaMacarena García LenziMartín BloussonPablo SigalValeria Giorcelli