Review: In PIG, Nicolas Cage Delivers One of the Finest Performances of His Career 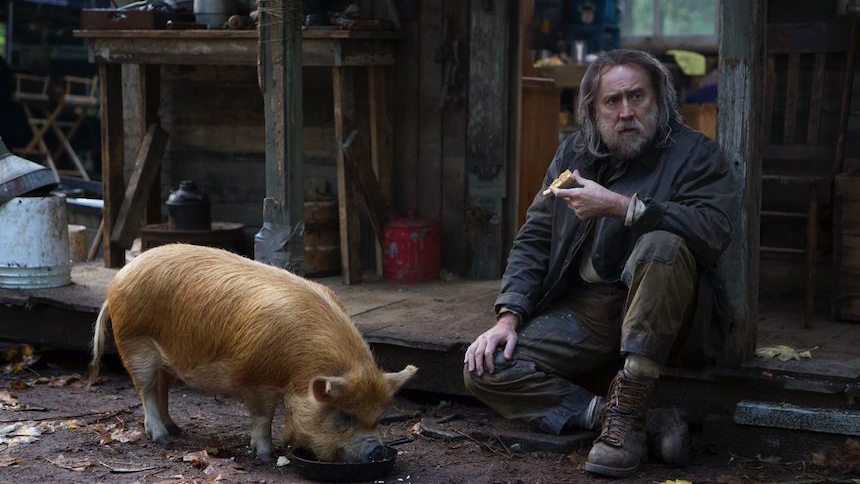 As critics and audiences alike have learned over four decades and counting, Nicolas Cage contains multitudes.

Not in a literal sense, of course, but in a figurative one, through committed (emphasis on “committed”) performances that began in the early 1980s, an Academy Award for Best Actor (Leaving Las Vegas), a career slide starring in disposable genre entries, and now, apparently far from the twilight of his career, a welcome resurgence. Just don’t call it a “Cageassance” (you can if you want, though). Every once in a while, Cage finds the perfect material for his acting talents (see, e.g., Mandy, The Colour Out of Space), including his most recent effort, Pig, a surprisingly introspective, poignant character study welded into the sturdy trappings of a slow-burning, unpredictable revenge-drama.

When we first meet Cage’s character, Robin “Rob” Feld, he’s living what counts as an idyllic life off-the-proverbial-grid in the wilds outside of Portland, Oregon. Rob spends his unmarked days with his animal companion, an unnamed female pig of unwavering loyalty and refined tastes. Said pig also happens to be a valuable — and to Rob, invaluable — truffle forager/hunter, the means to a simple, if not entirely unrewarding, lifestyle.

Rob’s pig finds the rare truffles that Rob’s buyer, Amir (Alex Wolff, Hereditary), purchases and resells in Portland to upscale restaurants. It’s a purely transactional relationship. Rob barely tolerates the verbose, insecure, self-conscious Alex while Alex, a slick, self-involved hipster perpetually struggling under the shadow of his mobster-like father, Darius (Adam Arkin), sees Rob, if not as a necessary evil, then as a means to an economic end: Becoming a big-time player in the truffles market.

Everything changes — as it generally does where fictional narratives are concerned, otherwise Pig wouldn’t be feature-length-worthy — when violent thieves appear in the night, beat Rob into submission, and steal his pig. Unbowed, if bloodied, Rob almost immediately decides to embark on a rescue-and-recovery mission, but with a broken-down truck and no other means of transportation, he’s forced to contact Amir, his only connection or lifeline to the world of the living. Despite Rob’s haggard, unwashed, and still bloody appearance (he deliberately refuses to wash the blood from his face or beard) and his limited utility to Amir (no pig, no revenue, and thus, no profit), Amir reluctantly agrees to serve as Rob’s driver and eventually, his somewhat unwilling partner in finding Rob’s kidnapped pig.

As Pig unfolds, it goes into deliberately odder, stranger places, bordering on the surreal. Rob’s 10-year, self-imposed isolation from practically everyone has only elevated his once extraordinary culinary talents into mythic, legendary status. Wherever Rob goes, his name and reputation precedes, opening more doors into his past than closing them. Rob’s reemergence, however, comes with a price, including an underground club (in both senses of the word “underground”) that’s less unsanctioned fight club and more a sado-masochistic club where men endure physical punishment for some kind of prize. For Rob, that prize is the information that will lead him to the next person in the chain who might know where to find Rob’s kidnapped pig.

Making his feature-length debut, co-writer and director Michael Sarnoski sends Rob and Amir into emotionally and physically uncomfortable places, including dual traumas that have defined Rob and Amir and how they approach or remove themselves from the world. As Amir, Alex Wolff, proves himself a more than adequate foil or counter-balance to Cage’s stoic Rob, filling what should be quiet moments with nervous, character-revealing conversation or keeping a nervous, edgy situational awareness of Rob’s every movement. Wolff manages to find the right, initial tone to a character whose first appearance makes him instantly unlikeable, but who ultimately emerges as layered and worthy of screen time as his older counterpart.

As Rob, Cage delivers one of his most subdued, subtle, and nimble performances in recent memory. It’s no less engaging or enthralling, however, than his previous, bigger-than-life performances. His Rob says little and sees everything, occasionally gracing anyone within hearing distance of hard-earned, if sometimes off-kilter, life-lessons. His body languages says more than enough to anyone around him.

Coiled, tense, and simmering, Cage’s Rob isn’t Cage in familiar rage mode, but the Cage in almost rage mode, a prospect that’s almost more terrifying to the other characters he encounters on a journey that promises something closer to Dante’s Inferno, instead delivering something closer — and far more satisfying — to Homer’s Odyssey, more about self-discovery and reconciling with the past than a potentially doomed rescue mission or obtaining revenge.

Do you feel this content is inappropriate or infringes upon your rights? Click here to report it, or see our DMCA policy.
Adam ArkinAlex WolffDarius PierceMichael SarnoskiNicolas CagePigVanessa Block