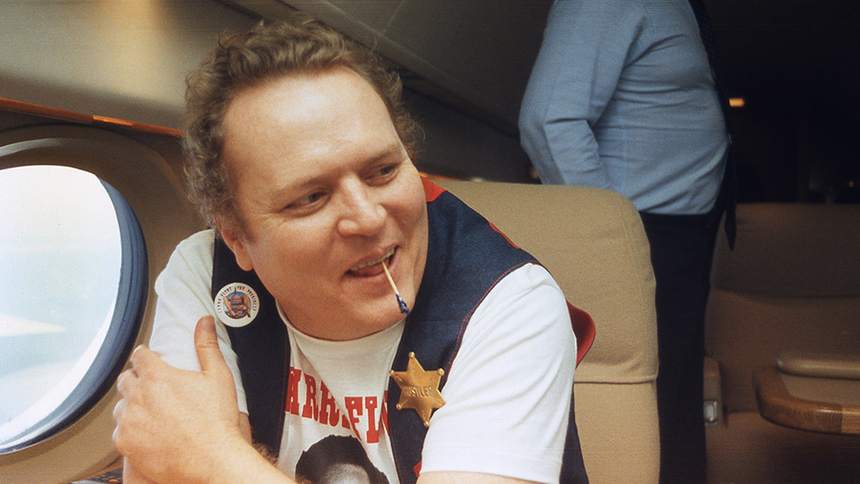 "You know the story, now you can see how it really happened," could be the logline to the latest doc-pic from filmmaker Nadia Szold.

Szold revisits the real-life story popularized by Milos Forman's 1996 biopic drama The People vs. Larry Flynt in her found-footage montage Larry Flynt For President. The film looks back on the pornographer's infamous presidential campaign running against Ronald Reagan. Szold's documentary is even more outrageous than Forman's rendition of the tale.

At this point, much of Flynt's life story is well-documented. Born in Kentucky, raised in poverty, Flynt built a multi-million dollar pornography empire out of a newsletter for the Hustler Go-Go club in Cincinnati throughout the 70s and 80s. In 1978, the self-declared smut peddler was shot in front of a courthouse. Five years later, he rebounded, more paranoid than ever, to announce his bid for the Republican presidential nomination. The unusual presidential candidate launched a personal crusade to "move the massive repressive hand of government from the crotch of the American people," becoming a sort of folk hero and free speech activist in the process.

Szold assembles never-before-seen footage captured in 1983 as a film crew shadowed Flynt in his attempt for the White House office. Remaining truthful to documentary conventions, the director preserves talking-heads commentary from Frank Zappa and Flynt's running mate, Russell Means, while other figures, such as Timothy Leary or Flynt's then bête noire, televangelist Jerry Falwell, appear in archival footage.

Besides being an interesting history lesson in the advocacy of the First Amendment while doubling as an extended teaser of Flynt´s biography procured from the first row, the ridiculous and occasionally bad taste publicity circus that the wheelchair-bound pornographer pulled off bears a striking resemblance to our times.

However, while an alleged Reagan strap-on sex tape and incest-accusation Flynt wielded in his campaign became the tools of dissent against the system, the fake news, alternative facts, and misinformation have yet to yield something positive for our age. (As a point of interest, in 2017, Flynt offered $10 million in cash for any information leading to the impeachment of U.S. President Donald Trump.)

Larry Flynt For President demonstrates proudly that truth is stranger than fiction. The film makes a great pairing with Errol Morris' My Psychedelic Love Story, a documentary that explores the love affair between Joanna Harcourt-Smith and another crusader against the system, LSD guru Timothy Leary. The two personalities and their rebellions share a common trait, despite being completely different; both films boast a paranoid-conspiracy tone with screwball-comedy qualities and romance.

Szold's oeuvre doesn't revisit the events, unlike Morris' docu-pic, which utilizes archival footage as a background illustration to Harcourt-Smith's arresting narration, but reconstructs them, letting the footage, and the people recorded, speak for itself. Even without the mesmerizing narration that My Psychedelic Love Story offers, Szold edits the material with a sense for dramatic set-ups and comic climaxes, delivering a similar rollercoaster of wacky unraveling that Morris achieved.

Do you feel this content is inappropriate or infringes upon your rights? Click here to report it, or see our DMCA policy.
DocumentaryLarry FlyntNadia Szoldtribeca 2021Tchavdar Georgiev