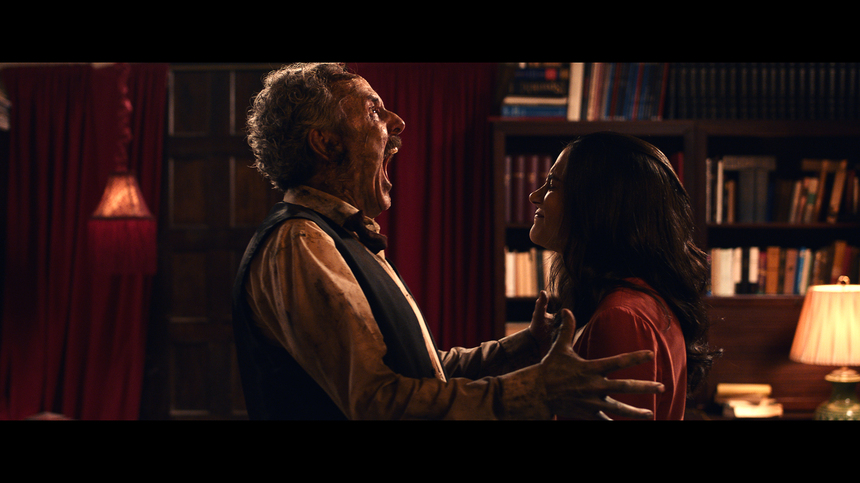 Most people have had a boss who is just a nightmare. Especially since the advent of mobile phones, laptops, and easy internet access, too many of our supervisors have decided that we must be awake and available at all house, ready to work 24/7, with no regard for our personal lives, let alone our physical and mental health. Perhaps this goes double in cities like Los Angeles, in the entertainment industry, where the stakes, and the egos, are inflated.

Too Late takes a literal look at the Los Angeles stand-up comedy scene, and the literal monstrous boss. Director D.W. Thomas' feature debut takes a wryly comic stance as it follows the story of one woman's attempt to get her career going while trying to literally keep on the good side of her famous and unique boss. Featuring familiar faces of the comedy scene, it's perhaps a bit too understated but a fun and clever take on what an assistant will go through to get ahead.

Violet (Alyssa Limperis) seems to have a dream job as assistant to Bob Devore, a comedy club owner whose shows feature the best of rising talent. She also has her own, smaller show at a local café, is an aspiring comedien, and just recently met fellow comic Jimmy (Will Wheldon) with whom the sparkd are flying. So what better job and life to have? Oh, except that her boss Bob (Ron Lynch) is a people-eating monster. Literally.

So while she might get to run her own small comedy show and help out with a bigger one, Violet also jumps every time her phone rings; Bob wants her available 24/7, not only for the club, but for his, um, needs. She's also being harassed by a guy from the east coast who think he can threaten her in order to get a spot on Bob's show. But of course, there is at least something she can do for this guy. Or to be more accurate, to this guy.

Reminiscent of Swimming with Sharks, it focuses on someone who understand it's hard work to readh the top; but exactly how much is too much, and how much abuse should she put up with? Like all of the performing arts, talent alone will not get you far enough, especially if you're a woman, especially in comedy. Violet is expected to do the dirty work, while Bob gets the glory. If she can hang on, keep her head down, do her own work in her spare time, and get Bob his monthly feed during dark of the moon', maybe she'll get her key to success.

Thomas allows the actors plenty of room to play within the premise and dialogue, combining the naturalism and the absurdity. Anyone familiar with the LA comedy scene is bound to recognize not only familiar faces but situations; Thomas and screenwriter Tom Becker find the sardonic humour (untalented comics are less filling to Bob's massive stomach; no matter how hard she works, Violet will never be anything more than an assistant to Bob). There's a lot of celever dialogue that highlights the joys and pitfalls of the industry, or any industry in which talent and merit are the last things under consideration.

Limperis is terrific as Violet, finding that perfect line to walk of a smart, ambitious, caring woman, who is still (well, at least explicably) putting up with abuse because her hands are proverbially tied. Lynch matches her as the boss who is just difficult enough to make the job almost impossible, while giving those little compliment and hints of encouragement to keep someone hanging on.

This is the kind of low-fi satire that works well with a premise that is both quite ridiculous and very believable. An on-the-nose portrayal not only of the specific world of stand-up comedy, but the school of hard knocks that any performer must inevitably endure.

Gravitas Ventures will release Too Late in select theaters and on digital platforms including iTunes, Google Play, Fandango Now and all major cable/satellite platforms on June 25th.