Pedro Kos directs a documentary about a large group of nuns who stood up to the patriarchy of the Catholic Church. 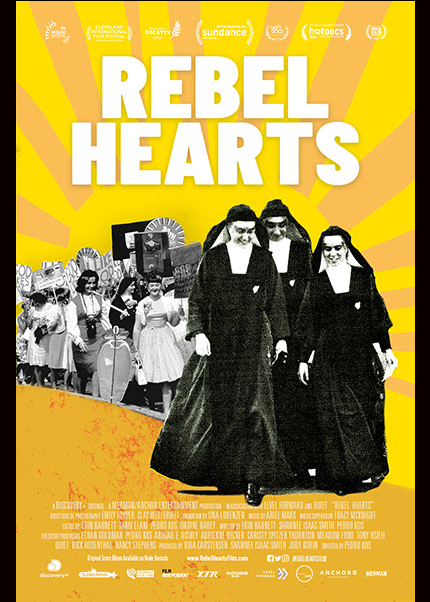 Where would film fans be nowadays without demonic nuns running amuck in our horror movies? In real life, though, some spiritually-minded nuns bravely proved their mettle through their actions some years ago.

Rebel Hearts
Strand Releasing will open the film in select theaters on June 25, before it launches globally on the streaming service discovery+ on June 27. Visit the official site for more information.

Even though I grew up in Los Angeles in the 1960s and 70s, I was not aware of the activities of The Sisters of the Immaculate Heart of Mary, who rose up against the patriarchy of the Catholic Church and took a strong stand of protest. As filmmaker Pedro Kos vividly documents in Rebel Hearts, that was not their original intention.

In the post-World War II era in the United States, returning troops began begatting many children, resulting in population growth in many areas, including Los Angeles. James Frances McIntyre, appointed as archbishop of Los Angeles in 1948, drew upon his past business experience and oversaw the church's expanding construction program, building many parishes and schools. Teachers were needed, and so nuns were drafted as teachers, even though they had no training as such and the size of their classes were often 70-80.

Nuns who served during that time period, into the early 1960s, speak in the documentary about the many requirements that they were expected to fulfill. Some expectations were fully anticipated, in a spiritual sense, while other expectations were far more onerous and restrictive, especially for the younger women, notably in regard to personal behavior and dress.

Decisions that emanated from the Second Vatican Council in 1965 endeavored to reconcile the Church, to some extent, with the changing world scene. In a secular sense, that meant the nuns felt empowered to begin to experiment with their mode of dress -- growing from a desire to wear more modern clothing, as opposed to a habit -- and, at the college, to begin expressing themselves more openly through their art and in their teachings.

They began to feel more free to join more openly in social protests. All these attempts to become more modern, or just to shake off old ways of doing things that were no longer relevant, or to express themselves in public, rankled senior Church leadership, leading to a crisis point.

The historical record shows that some male Catholic priests in Los Angeles also pushed for change during that time period. But the experiences documented by Pedro Kos in Rebel Heart are remarkable, in view of how the Catholic Church viewed women en masse and, more specifically, how the Church looked at the nuns, a group that they had subjugated for decades.

The women stood up and declared that they were not going to take it anymore. As a group, there were less than 400. They did not have outside support. They did not have wealthy backers. They did not turn to crime or prostitution in order to pay for their actions. (Sorry, genre film fanatics!) They persevered, they held the course, and still paid a costly price for what they did at the time.

Do you feel this content is inappropriate or infringes upon your rights? Click here to report it, or see our DMCA policy.
discovery plusdiscovery+documentaryPedro KosStrand ReleasingUS