Danielle Panabaker, Matt O'Leary, and George Finn star in a thriller, directed by Bradley King, and now streaming on Shudder. 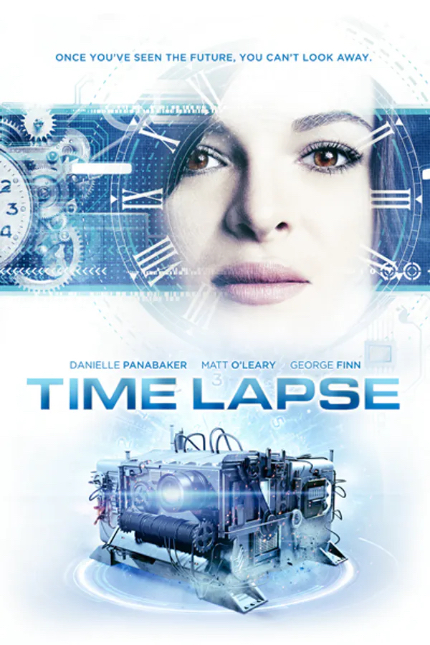 Opening with a shot of swirling red paint, which then has tiny flecks of white thrown into the mixture to disturb the surface and complicate the image, Bradley King and B.P. Cooper's Time Lapse shows just how bloody far you can go with a tiny budget, a great prop, and two locations.

The script here is a beauty that finds new ways to look at time travel causality -- or, rather, the dangers of perceived causality -- along with the good old genre standby of the 'big bag of money' landing in your lap. To prove it's the real deal, the film also diligently delves into trust-issues that develop amongst friends when a morally questionable opportunity in life presents itself.
At 20, everyone wants to be an artist, and Finn (Matt O'Leary, looking absolutely nothing like bespectacled teenager, The Brain, from Brick these days) is struggling to live the dream. His day job as superintendent of Sycamore Apartments entails fixing old ladies' blocked toilets, and competes as a distraction to overcoming a nasty case of creative blockage with his pill-popping, dog-race obsessed roommate, Jasper (George Finn), and his not-quite-nagging-but-still-neglected girlfriend Callie (Danielle Panabaker) and her subtle pleas for attention.
The three of them, very broke, spend most their time sitting in their living room staring out the window with concern for their futures, which are stalled as much as Finn's blank canvasses. The situation radically changes when one elderly tenant (a cameoing John Rhys-Davies, who is looking decidedly like Salman Rushdie these days) stops picking up his mail and a plethora of parking tickets begin to accumulate on the window of his car.
Finn, as the resident super, is obligated to see if he is OK. Inside the apartment, the three roommates discover the biggest camera they have ever seen; the size of a VW Beetle and bolted to the floor. This, along with hundreds of Polaroids taped to the wall in a diligent, kind of serial killer fashion. That the photos are all of their living room across the way, is of greater concern than the the few absent spaces on the wall.
They also find a lab book that outlines the nature of the large contraption: it can take photos about 24 hours in to the future. Greater cause for thought is: why is the camera lens pointed into their living room? And hmmm, is that tomorrow's dog race winners taped to the window and a new Finn painting on the canvass in the most current photo? You know, the snapshot of tomorrow...
Greed and the potential freedom to pursue their future trumps any concerns of invading their neighbour's privacy, or, for that matter, why he was invading theirs with his time machine test protocols. Things are also quickly brought to a head when they spot their neighbour's weirdly charred corpse nearby. Did he die because he violated the images dictated in the Polaroids from the future? Or perhaps being too close to whatever possible radiation that the machine gives off? Nope, definitely the former.
Before you can say Shallow Grave, the three of them are off to the races, literally and figuratively and conspicuously enough to draw the curiosity of Jasper's thuggish bookie. And a now daily struggle with the clock emerges, as well as the impossible to ignore tomorrow-photos that show Callie cheating on Finn with Jasper in plain sight in the living room. There is also a deluge of exciting canvass work done by Finn.
Trapped by a desire -- or need -- to match their reality to the photos, the three roommates create a horrific, Cassandra Complex nightmare inflected by the best of those classic Twilight Zone episodes. Finn is now forced to make copies of his own future paintings that he sees in the photos, Callie forced to kiss Jasper for the camera in front of her boyfriend, all to save their lives from causality-death and pay their intimidating gangster boss. The camera lens becomes a death's head from the adjacent apartment, a beast that needs to be fed the future it spits out every 24 hours.
Dominated by clocks and spirals, the browns of wood paneling and cheap student furniture bathed in the green glow of metaphysical hell, Time Lapse presents a new mystery of circumstance for its now unwilling victims to solve every day to save their lives. Or possibly playing poor fools for attempting to live up to the events in these almost context-free Polaroids.
The movie might sag a tiny bit in the middle as characters are getting tied up and weapons are broken out in the tiny abode (another stand-by in low budget genre thrillers). But, like a great science fiction short story, you know the the ones with a pristine core idea, it saves the real goods for the closing act.  The film plays with the established rules in ways that are clever, consistent, and yield brilliant results. This is always a tricky mix for any movie that deals with the paradoxes of time travel, and the director and a game cast of bright young thinngs pull it off in spades. Time Lapse is a great calling card for bigger things to come.
Ultimately a lesson here (as with any good roommate drama) is that trust amongst friends or, for that matter, enemies, would solve a lot of problems, stabilize a lot of delicate situations, and strengthen relationships to build a quality common future. Or, perhaps more importantly, don't fuck with time.

Review originally published during Fantasia in August 2014. The film is now streaming on Shudder.

Do you feel this content is inappropriate or infringes upon your rights? Click here to report it, or see our DMCA policy.
Bradley KingDanielle PanabakerGeorge FinnMatt O'LearyUS