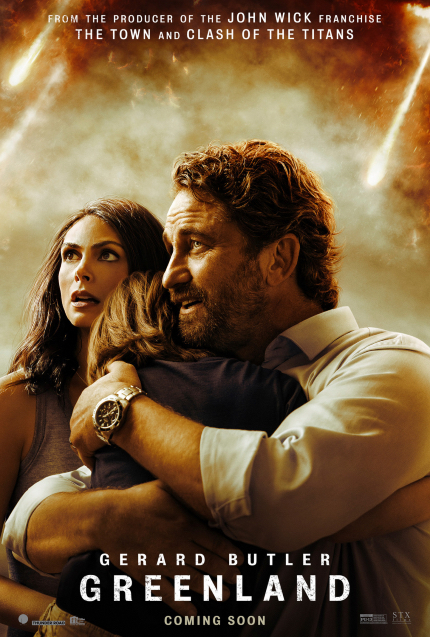 Worldwide disaster approaches! You know what to do.

Give Gerard Butler credit. The actor/producer from Scotland knows what he's good at doing on-screen in Hollywood, namely, killing bad guys while also being a fiercely protective paternal figure.

Reuniting with stuntman turned action filmmaker Ric Roman Waugh (Angel Has Fallen), Butler stars as structural engineer John Garrity with blunt force energy. He is newly estranged from his wife Allison (Morena Baccarin), but from the love he displays toward both her and their son Nathan, we know their separation won't last long.

Indeed, a neighborhood gathering in their home brings the family back together, as all watch an emergency broadcast about an approaching comet, and then see an emergency message, intended only for John and his family, alerting them that they have been selected for emergency shelter. No one else among the neighbors receives a similar message, which introduces a primary theme of the movie: every man for himself! Or, to be more accurate, every family for themselves.

To reach the shelter, the Garrity family immediately decamps, even as the splintering comet begins to rain down upon the earth, bringing with it widespread destruction and panic. The impending worldwide disaster makes John Garrity even more determined to save his family, come what may.

Director Waugh, whose past credits include the no-nonsense action pictures Snitch (with Dwayne Johnson) and Shot Caller (with Nikolaj Coster-Waldau), certainly knows how to stage and film extended, intense action sequences, while also allowing time to provide dramatic showcases for his protagonists. Working from an original screenplay by Chris Sparling, Greenland brings a good deal of coiled tension to scenes that sometimes border on the ludicrous, and other times fly past logic and narrative sense, merely to reinforce the idea that John Garrity is a praiseworthy family man, even though his actions sometimes negate that notion.

Like its star, Greenland knows what it's good at doing on-screen: blowing stuff up in spectacular fashion, all for the sake of family.

Do you feel this content is inappropriate or infringes upon your rights? Click here to report it, or see our DMCA policy.
Gerard ButlerHBO MaxMorena BaccarinRic Roman WaughUS