Sundance 2021 Review: LAND, Buried in an Avalanche of Cliches 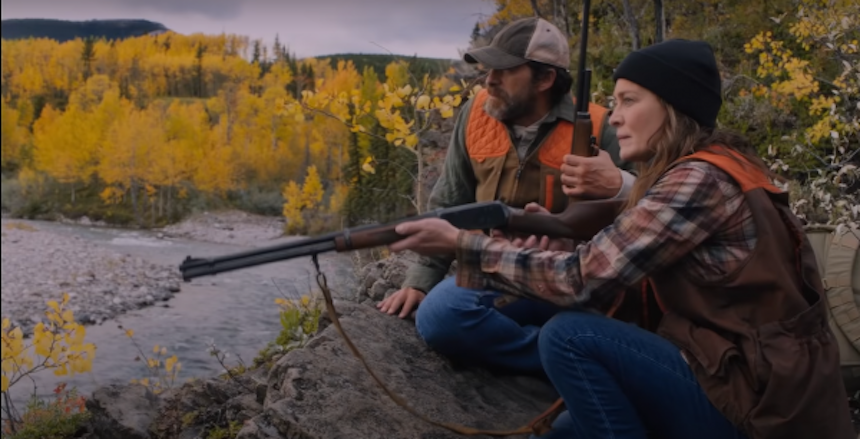 Buried in an avalanche of painfully obvious cliches, surface-deep characterizations, and unexamined privilege, Land, Robin Wright’s feature-length, filmmaking debut is about as far from auspicious as any feature-length debut can be. Elevated by Wright's impressively committed performance as a grief-haunted woman who chooses self-quarantining in the wilds of Wyoming (actually, Alberta, Canada) over human company and Bobby Bukowski’s (99 Homes) sublime cinematography, Land becomes almost watchable at times (operative word being "almost").

Wright’s character, Edee Mathis, consciously uncouples from every comfort and convenience of modern life or human connection to live in an isolated, ramshackle cabin in the woods with only the natural beauty of the surrounding mountains and later, the inexplicably helpful presence of an itinerant Mexican-American trapper and hunter to keep her company as she learns self-sufficiency and discovers a truer meaning of life (whatever that is).

Working from an undernourished screenplay (more sketch than script) co-written by Jesse Chatham and Erin Dignam, Wright naturally keeps herself and her character front-and-center in practically every scene, from a sketchy, impressionistic prologue that hints at the devastating loss — her husband, her preteen son — that’s led her to give up on therapy, a materially comfortable life in Chicago, and apparently the only living relative and/or friend she has left, her sister Emma (Kim Dickens). Everything in Chicago reminds her of what she once had, what she once took for granted, and what she’s permanently lost. With nothing holding her back and more than enough money to go anywhere and do anything, she packs up essential belongings and heads to the Rocky Mountains, and the aforementioned derelict cabin in the woods.

Woefully unprepared for surviving, let alone thriving, in the wilds of Wyoming (Alberta), Edee plunges headfirst into a dangerously naive enterprise. (She seems to have taken her wilderness cues from Into the Wild's ill-fated Chris McCandless). Edee has zero survival skills beyond relying on rapidly dwindling town-bought supplies and the use of a can opener, all but setting herself up for suicide-by-starvation over the next weeks and months as winter descends on her cabin. Only the incredibly lucky intervention by a generously kind stranger, Miguel (Demián Bichir), and a warmhearted, nonjudgemental Native-American nurse, Alawa (Sarah Dawn Pledge), save Edee from certain death (and Land mercifully ending abruptly at the half-hour mark). Slipping into cod-mysticism, Miguel claims he’s destined to help Edee because she’s crossed his path (actually, she was on the way to a frequent hunting area).

Miguel decides to remain with Edee as she regains her strength and once she has, offers to teach her how to hunt, trap, and skin animals so she can survive on her own. Edee, however, continually keeps Miguel at arm’s length, refusing to share any details about her past, including her last name, and refusing to hear anything about the outside world. Having little identity of his own beyond a few scattered facts and a cheaply manipulative third-act revelation, Miguel functions solely as a vehicle for Edee’s personal journey and eventual recovery. Once that function ends, so does Miguel’s function or contribution to a myopic narrative that not only uses Miguel as a feel-good, point-scoring prop, but refuses to interrogate any aspect of Edee’s privilege as a white woman with an entire menu of available life choices.

For all of its myriad issues, some perhaps fatal, at least Wright keeps the slender narrative moving at a relatively efficient, economical clip. Even with every other shot lingering on Wright’s sunburnt, pain-stricken face, Wright periodically turns the camera around to capturing Alberta’s wonder-and-awe-inspiring beauty, stopping for glamour shots as the natural world around Edee cycles through the seasons with or without her involvement. Ultimately, Land can’t escape its cliche-ridden script, surface-deep characters, or problematic central character.

Do you feel this content is inappropriate or infringes upon your rights? Click here to report it, or see our DMCA policy.
Demián BichirKim DickensRobin WrightSundance Film FestivalUS