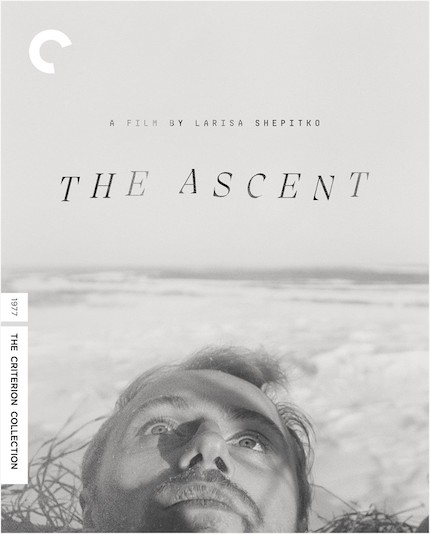 Ukrainan-born filmmaker Larisa Shepitko attended famed Russian cinematography school VGIK, where she was a protoge of Alexander Dovzhenko (Earth) and peer of Andrei Tarkovsky (Solaris, Stalker) and Elem Klimov (Come And See), whom she married and collaborated with. (In fact, after Shepitko's early death while scouting locations at age 41, Klimov stepped in to take over and finish her film Farewell.)

Out this week from Criterion is Shepitko's last fully finished film, The Ascent. Long lauded by fellow filmmakers, critics, and fans, this 1977 black and white parable was infused with religious parallels, not just from the book from which it was adapted, but by Shepitko herself, who was impassioned to make the film.

Completing any film requires an insane amount of fortitude, but if Shepitko were to be described as having just one thing, it would be fortitude. Having already made her thesis film Heat in extreme conditions, both externally and health-wise, Shepitko was used to struggle. You could say that getting The Ascent made was a driving force in Shepitko's life. Those who knew her were often astonished by her energy and determination to make film, but it was The Ascent in particular that resulted in the culmination of her artistic skills and will.

Based off Vasily Bykov's novel Sotnikov, The Ascent follows two Russian partisans in the bleak winter of 1942 in Belarus. Of course, it's World War II, and there's nothing like a harsh Soviet winter to set the tone of hopelessness and despair. (Filming conditions were as harsh as can be, with most cast and crew succumbing to blackened, frostbitten fingers.)

The soldiers get separated from their troop during a skirmish with the Germans, and set off to find shelter and food. They find a house with three smiling small children and not long after their mother returns, the Germans come searching. The partisans hide in the loft, but are found, and along with the mother, all three are taken as prisoners, leaving the children behind for their fates and how they're determined.

The Ascent is a film in which it isn't necessarily what happens but how it happens that makes all the difference in the world --- and in this case, it results in a fine piece of emotional, harrowing, absolutely transcendent cinema. It won the Golden Bear at the 1977 Berlin International Film Festival, in addition to other accolades.

Let's check out the special features included in this release:

The Criterion folks have knocked it out of the park again. The film sounds crisp and clear, and 4K digital restoration is fantastic, letting the breathtaking cinematography really shine with brilliant whites and deep, rich blacks. There are many scenes that are riveting, often those which showcase the haunting stare of Boris Plotnikov's Sotnikov (cast for his saintly looks) as the Jesus stand in, or the agony and despair of his friend Rybak (Vladimir Gostyukhin, who reminded me of a young Harrison Ford if Ford was playing a Soviet version of Judas).

All supplements are worth watching, even if some of the interviews and short documentaries overlap footage and quotes at times. I learned a lot about this incredible filmmaker, and the short included here, one of Shepitko's student films, was plucked from obscurity and Soviet censorship. It's nothing short of a miracle that this film has been hidden and spirited away, then rescued, restored, and included in this showcase for your viewing.

The included essay one the film from American poet and writer Fanny Howe is sublime, offering insights into the work, Shepitko herself, and into what makes us human. You've got to read it if you buy this release --- and if you're a fan of world cinema, I suggest that you do.

If you'd like to add The Ascent to your home library, head over to Criterion here. I suggest pairing it on your shelf with Klimov's Come And See, both as a thematic pairing, as well as a tribute to two wildly in love, master filmmakers who have unfortunately left this world. That we have these works as parting gifts of art and supreme storytelling is a testament to the heights that we can reach in this plane of existence.