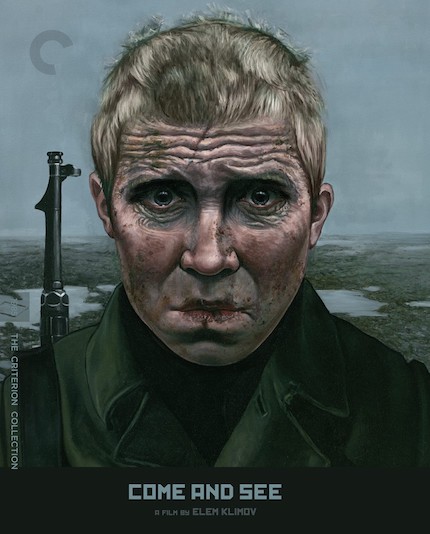 What exactly does one say about a film that is without a doubt, one of the greatest anti-war films of all time?

It's no small feat to consider when processing the 1985 masterpiece from Soviet director Elem Klimov (Agony).

To even receive the Blu-ray, to slip it out of the package, is to have the haunting and terrifying illustration on the cover (created by Jaxon Northon) of Come and See staring back at you.

What is seen in this artwork is the transition from child to an eldery person, with the atrocities of war as its catalyst.

Since this is the year 2020 and America is a flaming capitalist shitshow with each day arguably somehow worse than the next, it took over a week for me to become suitably numb enough to slip the Blu-ray disc into my player.

Come and See begins with Flyora, a boy (the 14-year-old Alexei Kravchenko, who is remarkable here) leaving to join the Partisans in Belarus, which is under attack by the scourge of the Earth in the early 1940s, the Nazis. Flyora leaves his mother and young twin sisters to join in the fight. He meets a teen girl a few years older than him, Glasha (Olga Mironova, whom seemingly never acted again after this film). Both are left behind by his Partisan unit, but here the teens experience and embrace moments of joy and peace by dancing in forest sunshowers before the real horrors begin.

And such is war; the bombardment of their temporary idyllic setting comes swiftly and loudly, along with the Nazis out of the sky. Death from above, and it's here before you'll ever be able to react.

From there, the teens attempt to escape back to Flyora's village, only to find it barren. In one of cinema's most breathtaking gut punches, we see the teens running down a road in search of the villagers; Glasha glances behind them only to see a large pile of bodies stacked up against the wall of Flyora's house, his family dead.

The girl cannot at first tell Floyra; she cannot even speak. The reaction is authentic.

Because this WWII in Belarus, which is between Poland and Russia, it's only going to get worse. It is enough to allude to further atrocities. However, the burning structure of villagers desperately trying to escape while Nazis laugh and clap and play music absurd to the scene, futher dehumanizing their victims, is another scene seared into my mind for all time.

The human race can be inhumane in devastating ways. Anyone with any shred of empathy will be deeply affected by Come and See. It's a harrowing film that should be required viewing not just all over the world, but especially here in America, where nationalism and exceptionalism has steadily fanned the flames of anti-science rhetoric alongside the frightening rise of white supremacy and neo-Nazis. I dare hope that we are not about to repeat history...again.

A cartharsis of sorts comes at the end, when weary, worn, weathered Flyora, now beset with wrinkles and dark circles (as in the Blu-ray's cover) shots into a portrait of Hitler again and again, rewinding history in his mind. We see black-and-white footage of actual WWII atrocities, going backward in time until we see a portrait of baby Adolf on his mother's lap, the stare vacant, a blank white sheet of what's to come.

This is all to say nothing of the exquisitely shot and composed cinematography, the wrenching performances, and the madness of using actual artillary in the making of the film.

A few things worth noting about Come and See and the personal lives of the filmmakers:

Klimov was a WWII survivor. In one of the archival footage/Blu-ray supplements, Klimov describes watching the Volga River and its banks burn after the Nazi bombing of a petrol station. Klimov escaped with his mother and baby brother (who also worked on the film and is interviewed for this Criterion release).

This respectful restoration of Come and See is beautiful; the picture is excellent, as is the sound. Here are the supplements included in this wonderful release:

I was entranced by the interviews, and it's always lovely to see Roger Deakins speak on anything. I have not been able to bring myself to watch the included documentary series on the the Belorussian genocide yet.

Criterion releases Come and See tomorrow, on June 30th. To purchase this incredibly important artifact of cinema, head to the page for the film here. It's also available to stream via the Criterion Channel.

Do you feel this content is inappropriate or infringes upon your rights? Click here to report it, or see our DMCA policy.
Blu-ray reviewCome and SeeCriterion Collection

More about Come and See