Arrow Video has revealed their April releases for 2021 and it's safe to say that this is going to be a huge month for cult film fans. Perhaps the biggest release of the month is the UK-only 4K UHD premiere of Kinji Fukasaku's Battle Royale in an incredible looking limited edition set that looks to seriously outpace all previous editions (hint: 4K UHD is region free, so if you don't care about Battle Royale II, which only appears on standard Blu-ray in the set, and you live outside of the UK consider placing your order!).

Also making the 4K jump is Donnie Darko, another long out of print film from Arrow that had been selling for big bucks on the secondary market, this one will be available in the US, UK, and Canada. Also appearing in all three territories is Nico Mastorakis debut feature, Death Has Blue Eyes, Jack Hill's Switchblade Sisters, and a new Steelbook release for Elvira: Mistress of the Dark.

Available in the UK and Canada, sadly not the US, will be Justin McConnell's excellent filmmaking documentary, Clapboard Jungle. We reviewed the film in 2020 and it is an astoundingly personal warts-and-all look into what it takes to get an independent film made, and I've been told that the bonus materials are pretty incredible as well. Check the links below for our review of this amazing film.

Anyway, complete release details are below, check them out for yourself. It's going to be an expensive Spring. 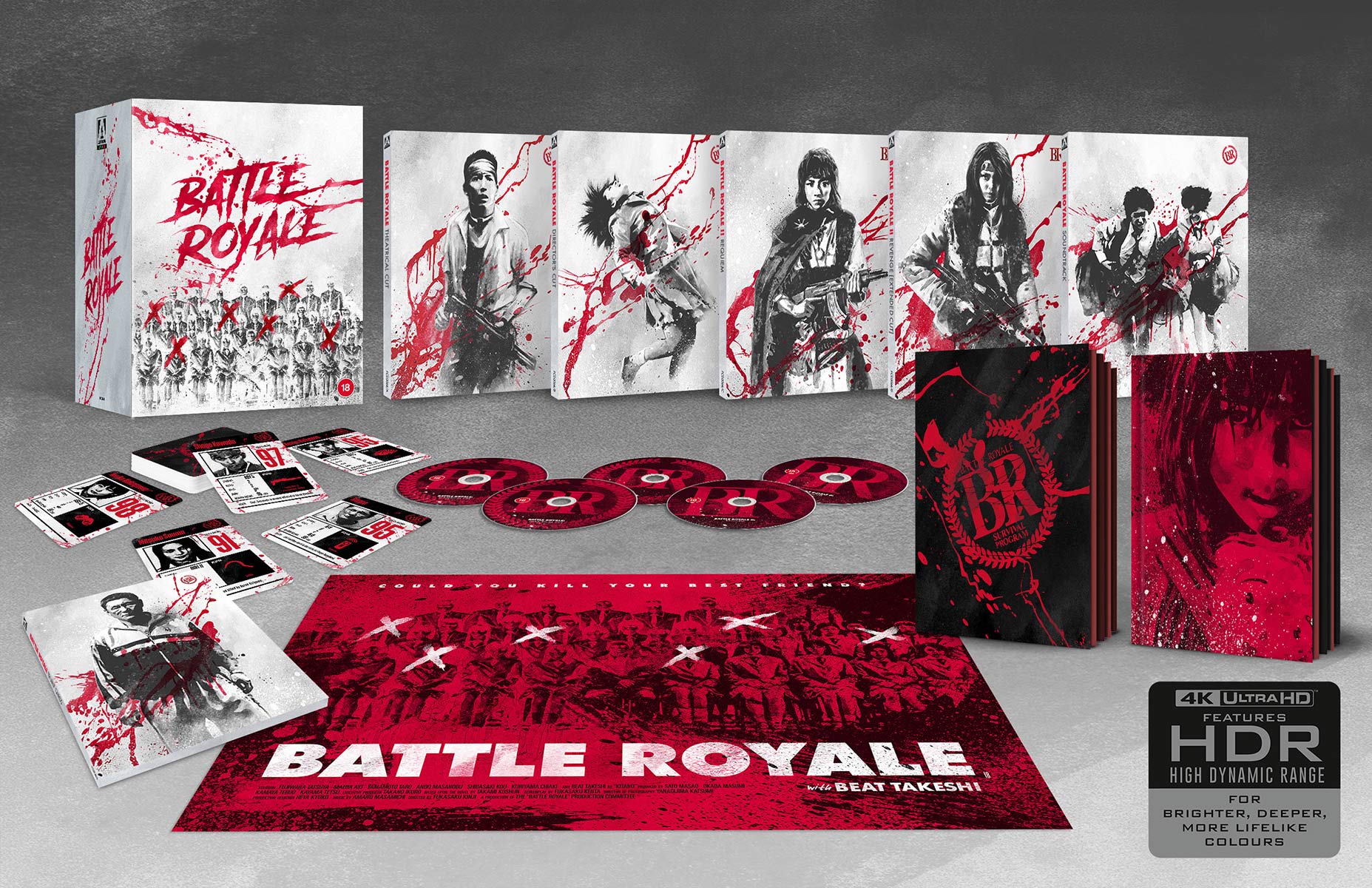 The kids of Third Year Class-B Shiroiwa Junior High School are back, in a brand new UHD restoration of the classic cult shocker adapted from the controversial novel by Koushun Takami.

Presenting an alternate dystopian vision of turn-of-the-millennium Japan, Battle Royale follows the 42 junior high school students selected to take part in the government’s annual Battle Royale programme, established as an extreme method of addressing concerns about juvenile delinquency. Dispatched to a remote island, they are each given individual weapons (ranging from Uzis and machetes to pan lids and binoculars), food and water, and the order to go out and kill one other. Every player is fitted with an explosive collar around their neck, imposing a strict three-day time limit on the deadly games in which there can only be one survivor. Overseeing the carnage is ‘Beat’ Takeshi Kitano (Sonatine, Hana-bi, Zatoichi) as the teacher pushed to the edge by his unruly charges.

Playing like a turbo-charged hybrid of Lord of the Flies and The Most Dangerous Game, the final completed work by veteran yakuza film director Kinji Fukasaku (Battles without Honor and Humanity, Graveyard of Honor) helped launch a new wave of appreciation for Asian cinema in the 21st century. Also included in the set is the incendiary sequel Battle Royale II, the directing debut of Kenta Fukasaku (after his father passed away during production), in which a new class of delinquents are recruited by the government to hunt down the survivor of the deadly games of the first film. 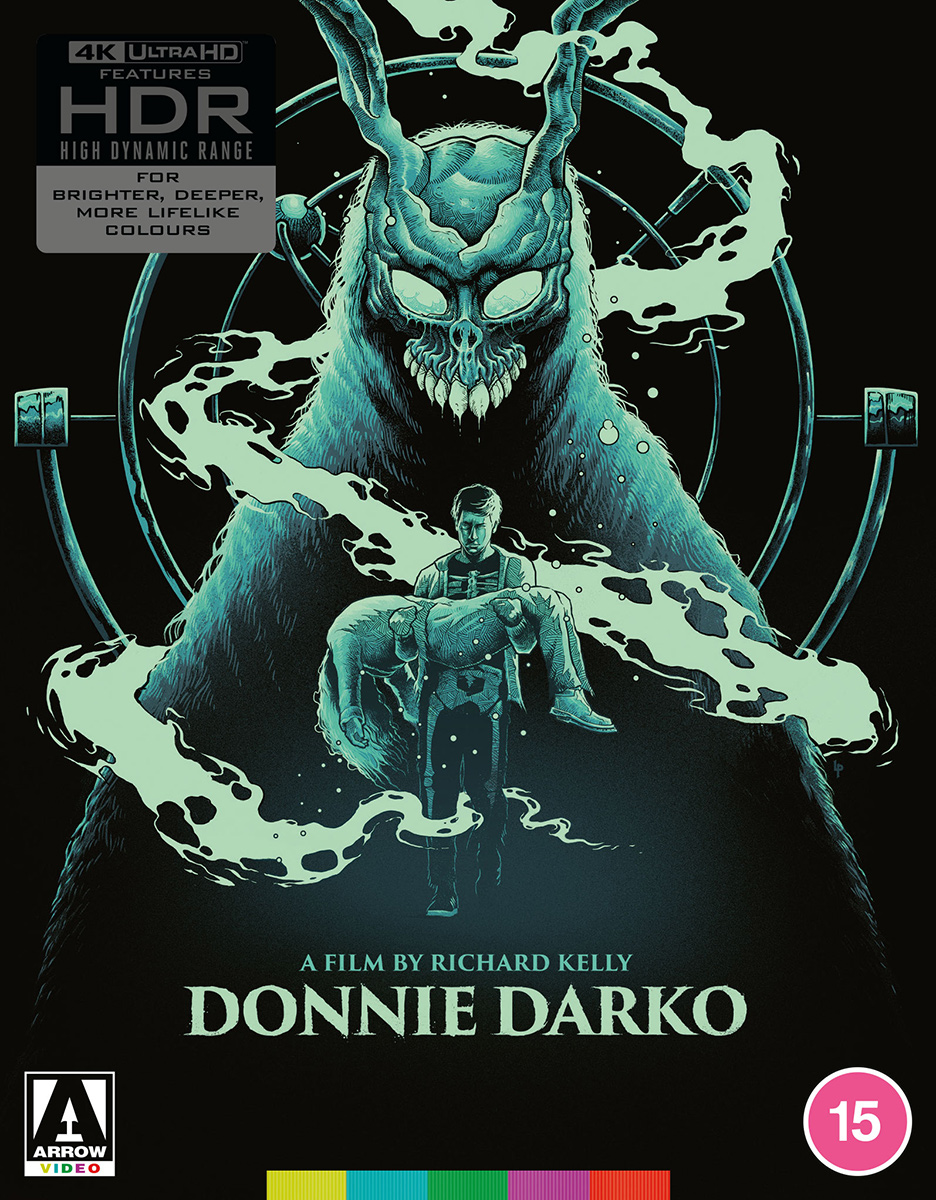 I WANT YOU TO WATCH THE MOVIE SCREEN. THERE’S SOMETHING I WANT TO SHOW YOU.

Fifteen years before Stranger Things combined science fiction, Spielbergian touches and 80s nostalgia to much acclaim, Richard Kelly set the template – and the high-water mark – with his debut feature, Donnie Darko. Initially beset with distribution problems, it would slowly find its audience and emerge as arguably the first cult classic of the new millennium.

Donnie is a troubled high school student: in therapy, prone to sleepwalking and in possession of an imaginary friend, a six-foot rabbit named Frank, who tells him the world is going to end in 28 days, 06 hours, 42 minutes and 12 seconds. During that time he will navigate teenage life, narrowly avoid death in the form of a falling jet engine, follow Frank’s maladjusted instructions and try to maintain the space-time continuum.

Described by its director as “The Catcher in the Rye as told by Philip K. Dick”, Donnie Darko combines an eye-catching, eclectic cast – pre-stardom Jake and Maggie Gyllenhaal, heartthrob Patrick Swayze, former child star Drew Barrymore, Oscar nominees Mary McDonnell and Katharine Ross, and television favourite Noah Wyle – and an evocative soundtrack of 80s classics by Echo and the Bunnymen, Tears for Fears and Duran Duran. This brand-new 4K restoration, carried out exclusively for this release by Arrow Films, allows a modern classic to finally receive the home video treatment it deserves. 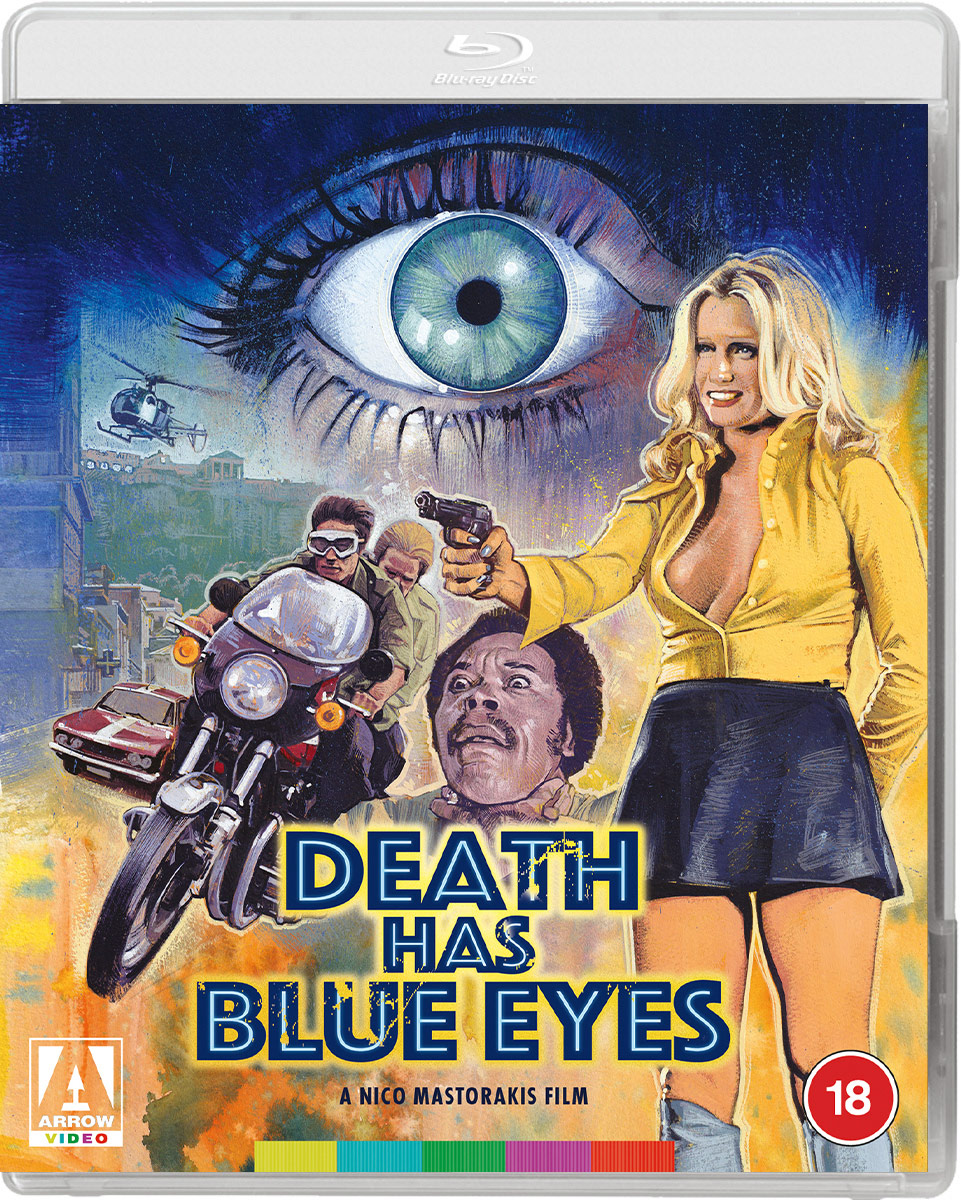 Death Has Blue Eyes is a gripping paranormal action thriller with shades of giallo from the director of the cult classic video nasty Island of Death (1976).

When local gigolo Chess (Chris Nomikos) greets his vacationing friend Bob Kovalski (Peter Winter) at Athens airport, the pair embark on a string of scams and erotic dalliances that eventually lead them into contact with an elegant wealthy woman, Geraldine Steinwetz (Jessica Dublin), and her glamorous daughter Christine (Maria Aliferi). Geraldine blackmails the two cheeky bachelor boys into acting as bodyguards for Christine, whom it transpires has telepathic abilities and has had her eye on them for some time. After fleeing from a series of assassination attempts, it soon becomes clear that Geraldine herself might not be quite whom she seems, as the two young men find themselves caught up in a political conspiracy of international dimensions.

In his debut feature, maverick filmmaker Nico Mastorakis presents us with a generous meze of non-stop car, bike and helicopter chases, a bevy of beautiful girls with guns, sensational softcore sex scenes, psychic thrills and Cold War political intrigue set against the picturesque landscapes of 70s Greece, all presented for the very first time in a new HD master in both widescreen and full-frame versions. 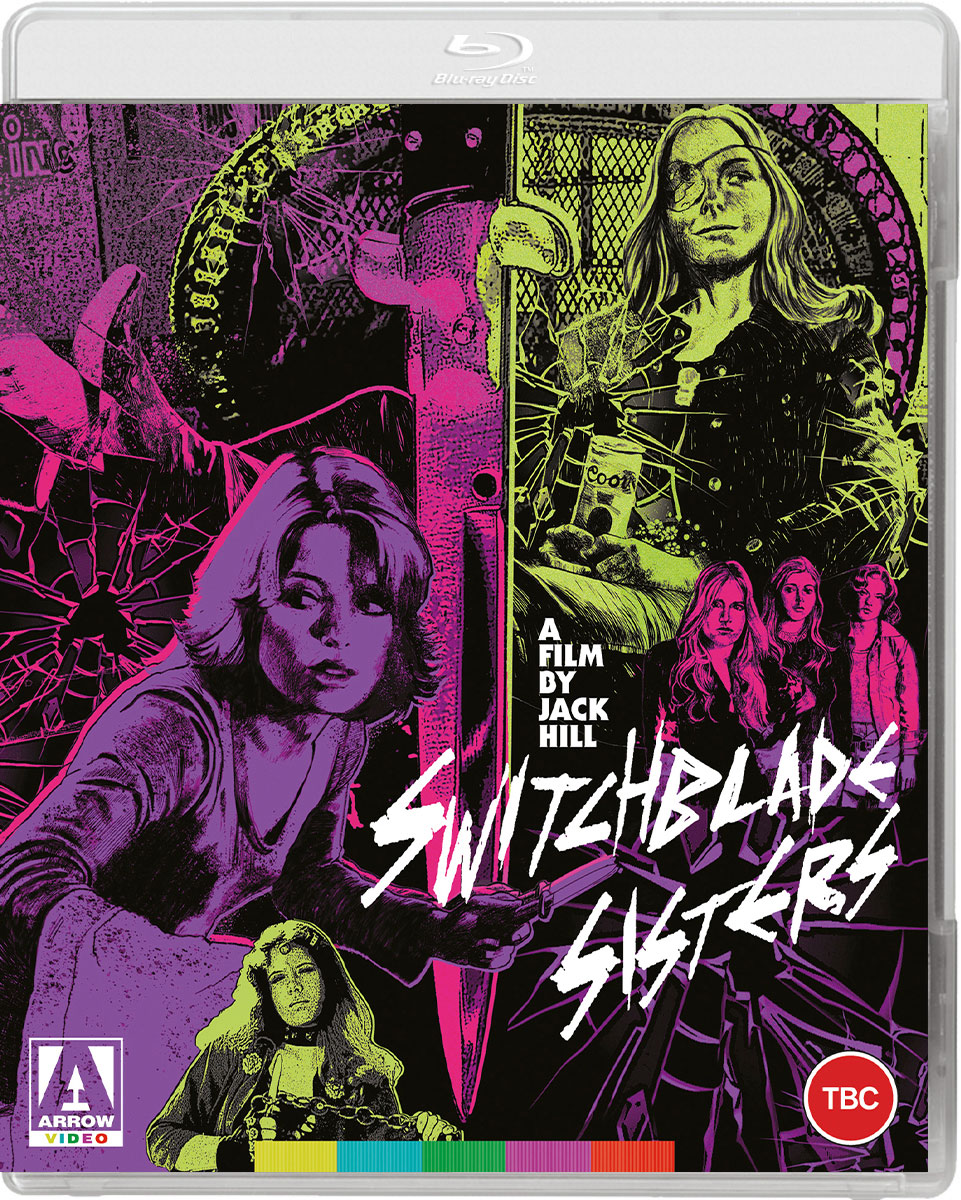 THE WILDEST GIRL GANG THAT EVER BLASTED THE STREETS!

Lace (Robbie Lee), the leader of inner city girl gang The Dagger Debs, meets her match when new girl Maggie (Joanne Nail) moves into the neighbourhood. Mistrust and conflict turn to friendship as the girls end up in Juvenile Detention together at the mercy of abusive guards. Meanwhile, The Dagger Debs’ male counterparts The Silver Daggers have to contend with the arrival of a new gang, led by the villainous Crabs (Chase Newhart). But when the girls get back on the streets, a planned retaliation strike in tandem with The Silver Daggers backfires and puts Lace in hospital. Maggie assumes control, teaming up with Muff (Marlene Clark) and her gang of African-American militants from across town to declare all out war. But there’s a traitor in their midst... 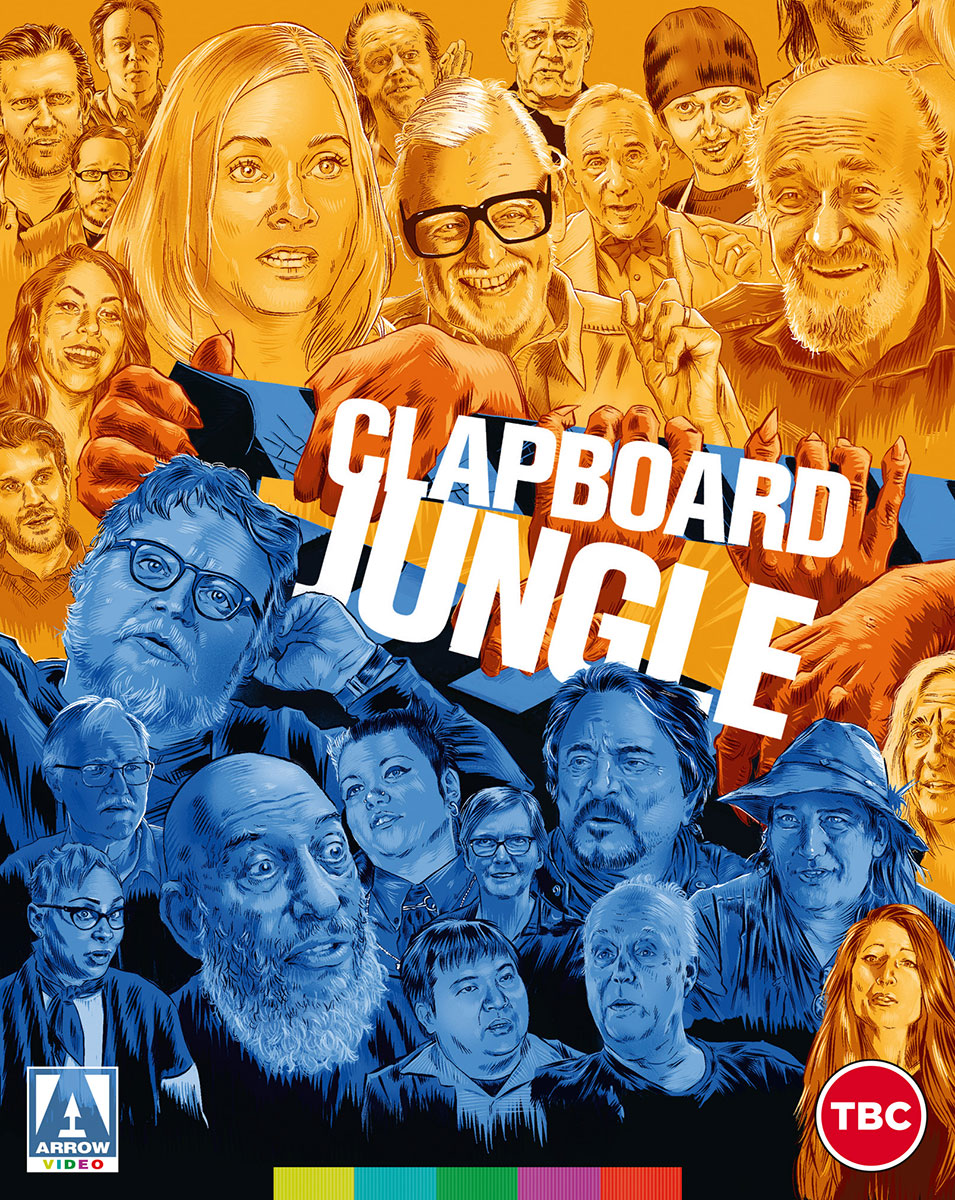 Navigating the current film business is more difficult than ever before. Rapidly changing technology and an overcrowded marketplace have led to an industry in which anyone can now make a film, but few can make a living.

Following five years in the life and career of independent filmmaker Justin McConnell (Lifechanger), this documentary explores the struggles of financing, attracting the right talent, working with practical effects and selling the finished product in the hope of turning a profit. Featuring interviews with a range of industry luminaries – including Guillermo del Toro (Crimson Peak), Sid Haig (Spider Baby), Barbara Crampton (Re-Animator), Mick Garris (The Stand), Dick Miller (Matinee), Tom Holland (Fright Night) and George A. Romero (The Crazies), alongside a host of others – not only are technical aspects and interpersonal skills discussed but also the emotional stamina and little-known tips needed to survive in the low budget film industry.

A warts-and-all exploration of what it takes to get a film made and released, Clapboard Jungle serves as a survival guide for the modern independent filmmaker and offers a fascinating insight into a side of the industry with which few are likely to be familiar. 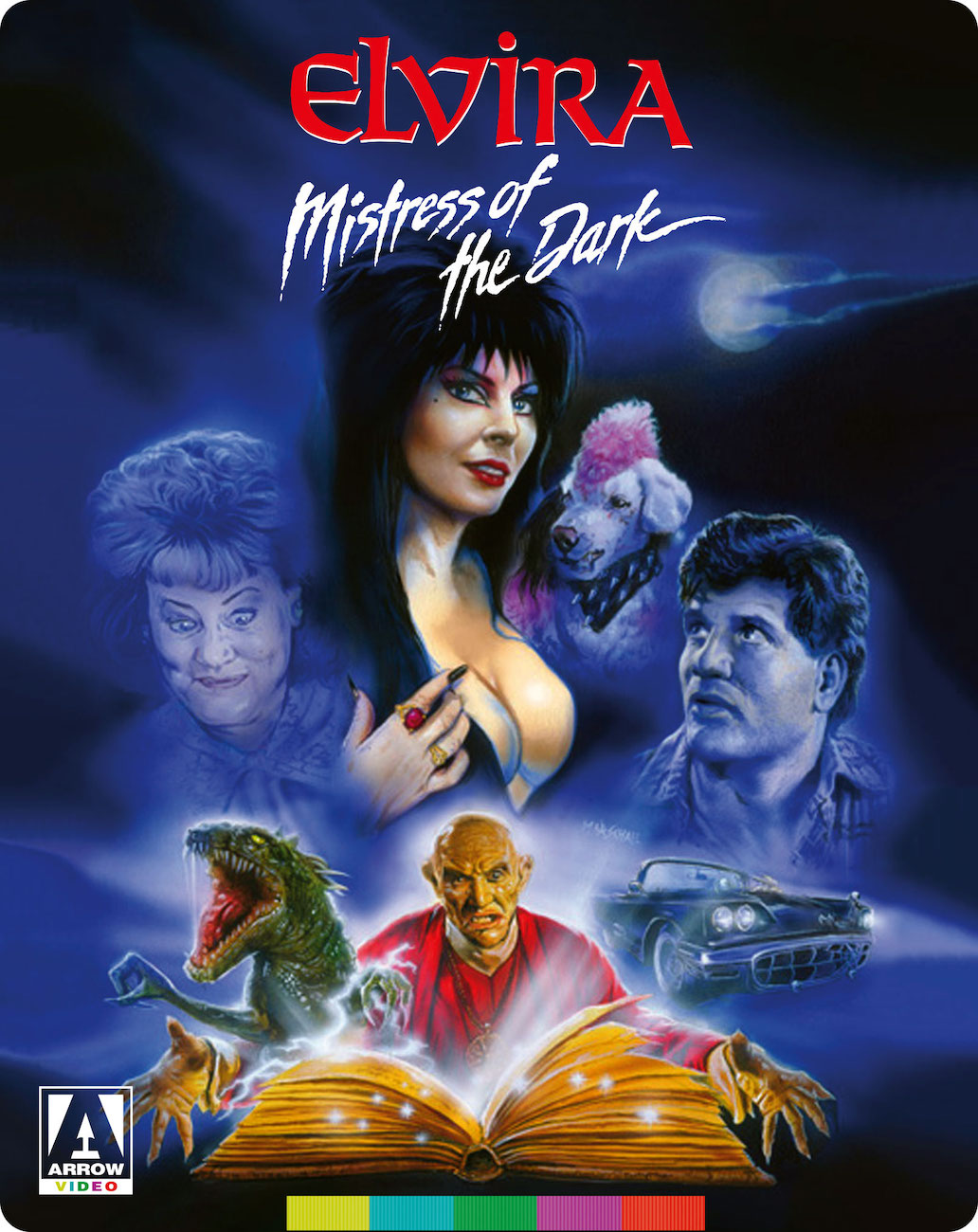 She’s back! Elvira, Horrorland’s hostess with the mostest, busts out on positively bursting-at-the-seams special edition of her big screen debut, Elvira: Mistress of the Dark!

Having just quit her job as a Los Angeles TV horror hostess, Elvira receives the unexpected news that she’s set to inherit part of her great aunt Morgana’s estate. Arriving in the small town of Fallwell, Massachusetts to claim her inheritance, Elvira receives a less than enthusiastic reception from the conservative locals – amongst them, her sinister uncle Vincent, who, unbeknownst to Elvira, is in fact an evil warlock secretly scheming to steal the old family spellbook for his own nefarious ends…

Campy, quirky and stuffed to the brim with more double entendres than your average Carry On movie, 1988’s Elvira: Mistress of the Dark helped solidify the horror hostess (played by Cassandra Peterson) as a major pop culture icon, here owning every inch of the screen with her quick wit, sass, and of course, cleaving-enhancing gown!

• 2018 restoration from a 4K scan of original film elements

• Optional English subtitles for the deaf and hard of hearing

• Introduction to the film by director James Signorelli

• 2017 Audio Commentary with Patterson Lundquist, www.elviramistressofthedark.com webmaster and judge of US TV show The Search for the Next Elvira

• Too Macabre – The Making of Elvira: Mistress of the Dark – 2018 version of this feature-length documentary on the making of the film, including interviews with various cast and crew and rare never-before-seen archival material

• Recipe for Terror: The Creation of the Pot Monster – 2018 version of this featurette on the concept and design of the pot monster, as well as the film’s other SFX

• Original US theatrical and teaser trailers