Now Streaming: SING ME A SONG, A Document of Fantasy Crashing Into Reality 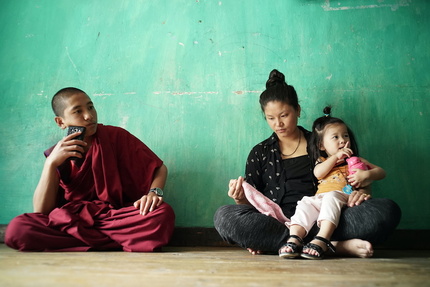 "Have the Monks stopped meditating? They all seem to be tweeting." Werner Herzog made this potent (and pithy) observation in his 2016 documentary on the origins and effects of the internet, Lo And Behold. A few years later, French director (and cinematographer) Thomas Balmès takes this hypothesis an intimate leap forward with Sing Me A Song. The film is a non-fiction portrait of a long-distance relationship between a Buddhist Monk in the Bhutanese mountains and a lounge singer (and single mother) in the capital city of Thimphu, some 80 kilometres away.

This is not Balmès first trip to Bhutan, nor to the remote mountainous region of Laya, as nearly a decade ago, he made a film called Happiness, about an eight year old monk, Peyangki, who encounters electricity, television and technology for the first time. The country of Bhutan was a long hold out from telecommunications and globalization, which didn't arrive until the 21st century, and in the more rural parts, into the 2010s. The prologue of Sing Me A Song is comprised of moments from that previous shoot, like Michael Apted's Up series, we are reintroduced to 8 year old Peyangki frolicking in the outdoors and talking to the camera of his dreams about electricity and television, before settling down to bed.

He awakens, in that special movie-editing way, nine years later as a 17 year old adult, by the alarm ringing on his smart-phone. In a magnificently executed reverse dolly shot, we see all the young monks chanting thier morning salutations; but as the camera slowly reveals, multitasking is the norm, as their own devices are not too far away from them while they pray. Many of the monks are playing games. We also see Peyangki getting a stern lecture from his superior that his studies and spiritual life are suffering. His mother, who is proud of her son's career, echoes her concerns about phone addicition derailing his potential.

Anyone who has been a parent for the last 15 years is fully aware that these lecture are likely not going to be effective. We are here in the 21st century. Abstinence is no longer a solution. And herein lies the tone and the point of a film like Sing Me A Song, we get to re-examine our joys, addictions, and unconscious habits that have been mediated or exacerbated via the break-neck pace of technology through fresh, presumably, but not necessarily, innocent, eyes.

The core of the documentary is Peyangki's budding WeChat relationship with Ugyen. They meet in an online forum that sings (unironically) saccharine love songs, and posts the videos to the group. Peyangki is clearly smitten. At one point he is shown ignoring the World Cup soccer game, that has the rest of his brethren in thrall via the monastery's lone television, to memorize lyrics to sing later. One of his fellow junior monks speculates that perhaps she is wealthy because she lives in the city and can afford make-up to lighten her complexion.

Meanwhile, the camera jumps into Ugyen's life in Thimphu. She has not disclosed to Peyangki that she has a daughter from another relationship. Nor that she is so broke she is considering leaving her daughter with family so she can more money moving to work in far off Kuwait. Meanwhile she is under the notion that Peyangki has gotten wealthy foraging for medicinal mushrooms in the highlands around Laya with his sister, and that he may be a potential ticket out of her own poverty.

The intimacy (and precarity) of their video chats, squeezed in on the sly in constricted spaces between their profoundly different professional lives, is cross-cut in such a way that the film often ceases to feel like a documentary. Balmès access to the personal emotional headspace of his pair of subjects here is exquisite, and he finds a way (acting as his own cinematographer) to frame these expressions in textured, visual ways. The widescreen photography (and prime lenses) work wonders for facial close-ups; bet it in the low light of the butter lamps of the monastery, or the garish greens & pinks of the urban karaoke lounges.

How we intuitively curate our own self-presentation and ego via technology filters (both literal and figurative) is a moral (ethical?) through-line of Sing Me A Song. The hope and fantasy, like the breathless karaoke selections spouting aching, blinding love, crashes into the more pragmatic reality of unsynchronized expectations. The cost of gadgets and data. This is a familiar, even universal, story - told in a specifically foreign fashion. It is a lesson, a tragedy, and a trodden pathway of a life, or three. Stories like this, of Peyangki and Ugyen, matter. The empathy machine of cinema is alive and well.

What Herzog dangled as a loaded question, is address in Sing Me A Song, in some small way. It is good that the Monks are tweeting, our world is not static, and there are many thoroughfares towards enlightenment. I truly hope to catch up with Peyangki's journey again in the next decade.

Sing Me A Song will be available on VOD and various digital platforms on January 1, 2021.

More about Sing Me A Song