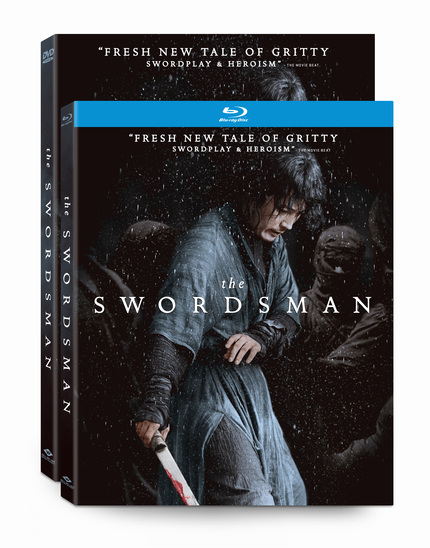 Coming to Blu-ray and digital next year from comtemporary Asian cinema specialists, Well Go USA, is debutante director Choi Jae-Hoon's The Swordsman, starring Jang Hyuk (Volcano High, The Flu). A veteran of the popular K-drama circuit, Jang Hyuk features here as the titular swordsman, an aging royal guard forced into retirement after a slip-up leads to the fall of a king. Driven into seclusion in the forest with his shame and failing eyesight, he's called back into action when the one thing he loves most, his young daughter, is captured by traffickers.

We've been given your exclusive first look at the new trailer for this exciting action film that features Jang in the lead with a special appearance from Indonesian badass Joe Taslim (The Raid, The Night Comes For Us, Fast & Furious 6) as a Qing swordsman looking to make a name for himself. It is packed with slicing and dicing action, and we can't wait to see the rest on February 16th when The Swordsman hits home screens on Blu-ray and digital.

“[A] gritty action film filled with spectacular sword-wielding stunt work” ~ GEEK CULTURE
“… the right blend of exciting sword-wielding action, drama, and warrior’s code to satisfy the appetites of more die-hard genre fans.” ~ THE MOVIE BEAT
THE SWORDSMAN
The Classic, Over-the-Top Historical Swordplay Action Film
Debuts on Digital, Blu-ray™ & DVD February 16
Includes a New English Dub!
PLANO, TEXAS (December 16, 2020) – There’s “never a dull moment” (The Movie Beat) in a “fun hybrid of mainstream historical drama and traditional martial arts action” (The Movie Hole) when the action-packed epic THE SWORDSMAN debuts on Digital, Blu-ray™ and DVD February 16 from Well Go USA Entertainment.  After failing to protect and prevent the downfall of the King, the best swordsman in Joseon leaves and lives in seclusion with his daughter in the mountains. As his eyesight begins to fail due to an old injury, his daughter seeks to find a treatment for him. When she is captured and taken away by a slave trader, THE SWORDSMAN is forced to raise his sword again in order to save her. “Jang Hyuk (Empire of Lust) swirls about as an unstoppable force of nature” (HanCinema) for first time writer/director Choi Jae-hoon, and the film also stars Kim Hyeon-soo (Be With You), Joe Taslim (The Raid: Redemption, Fast & Furious 6), Jeong Man-sik (Beasts Clawing at Straws), Lee Na-kyung (Battle for Incheon: Operation Chromite) and Lee Min-hyuk (A Love to Kill).
Synopsis:
After being blinded in a coup against the king, Joseon’s greatest swordsman (Jang Hyuk) goes into hiding, far removed from his city’s anguish. But when traffickers kidnap his daughter, he has no choice but to unsheathe his sword once more.

Do you feel this content is inappropriate or infringes upon your rights? Click here to report it, or see our DMCA policy.
Jae-Hoon ChoiJang HyukMan-sik JeongHyun-Sung JangChoi Jin-hoAction