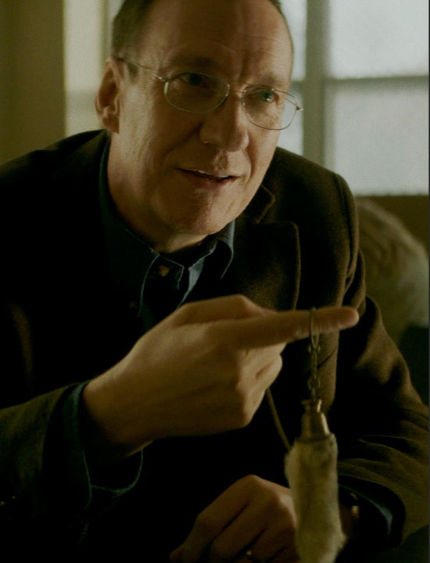 Harkening back to his former glory days, writer/director Atom Egoyan (Exotica, The Sweet Hereafter) makes a comeback of sorts with Guest of Honour, featuring a stellar lead performance by veteran British character actor David Thewlis. The film slowly and seductively unfolds a story of guilt, childhood trauma and vengeance in that unmistakable Egoyan style.

It starts with beautiful Veronica (Laysla de Oliveira) meeting a local priest (Luke Wilson) to arrange for her dad's funeral. She is there to lend him some insights to what kind of man her father was for composing a eulogy at the service. She doesn't have much to say about her dad, Jim (David Thewlis), except he took good care of her pet bunny, Benjamin, whenever she was away. The last time she was away was quite a while, because she was in prison for something she didn't quite commit.

With the film alternating between present and flashbacks, we meet Jim, a nebbish health inspector, widower and former restaurateur, as he visits various eateries, zealously enforcing by-the-book health regulations. His matter of fact, cold approach leads to lively and almost comical situations at times, countering the film's more grievous subjects. At home, he leads a lonely life, with an enormous 15-year-old white rabbit, whose entire life span equals the approximate time elapsed during the film.

A prank on a creepy and aggressive bus driver who has a crush on her triggers Veronica's deep-seated, guilty conscience about her boyfriend's suicide when she was a teen. And it all stems from her childhood, when she witnessed Jim holding hands with her music teacher while sitting next to her dying mom at her music recital.

But there are also some brilliant moments in the film: as it is customary in Egoyan films, there is an all-out, uncomfortable public confessional with a big, emotional display. In Guest of Honour, it takes place in an Armenian restaurant, managed by Anna, who is played by frequent Egoyan collaborator (and his wife), Arsinée Khanjian. Inebriated Jim is supposed to give a speech as a guest of honour and Jim spills out his intentions for killing the bus driver, whom he sees as responsible for ruining his daughter's life.

The scene highlights Thewlis as a gifted, dexterous actor and places him alongside the Egoyan pantheon of memorable fellow British actors, namely Ian Holm in The Sweet Hereafter and Bob Hoskins in Felicia's Journey, both indulged in brilliant confession scenes of their own. Scenes with Jim visiting Veronica in jail are also wonderful. Their encounters are sometimes accusatory and resentful, but there are also great and tender father-daughter moments, displaying mutual understanding and shared grief.

Guest of Honour might not be the best thing Egoyan has made. But with David Thewlis's affecting and measured performance, it comes close to his heyday of filmmaking in the 90s.

The film is now streaming on The Criterion Channel as part of the Directed by Atom Egoyan collection.

Do you feel this content is inappropriate or infringes upon your rights? Click here to report it, or see our DMCA policy.
Atom EgoyanCanadaDavid ThewlisLaysla De OliveiraLuke WilsonThe Criterion Channel

More about Guest of Honour