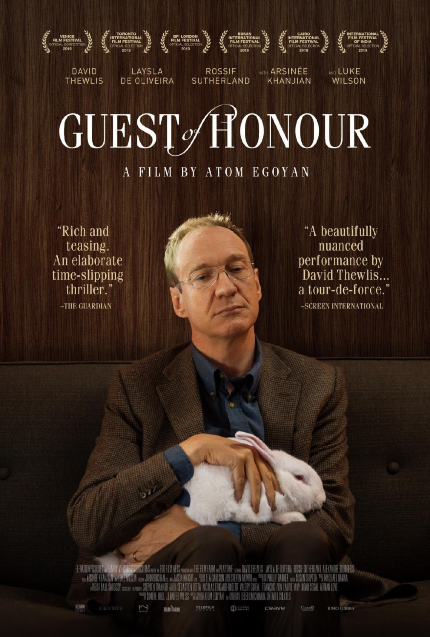 Love them or hate them, Atom Egoyan consistently makes films that burrow under the skin and display his distinctive vision.

The auteur's latest, Guest of Honour, debuted at the Venice and Toronto film festivals last fall, and is now heading for release in North America on July 10, 2020. David Thewlis, Laysla De Oliveira, Rossif Sutherland and Luke Wilson star in the drama.

The official synopsis sets the stage:

"A hoax instigated by an aggressive school bus driver (Rossif Sutherland) goes very wrong. Accused of abusing her position of authority with 17-year-old Clive (Alexandre Bourgeois) and another student, Veronica is imprisoned. Convinced that she deserves to be punished for crimes she committed at an earlier age, Veronica rebuffs her father's attempts to secure her early release.

"Confused and frustrated by her intransigence, Jim's anguish begins to impinge on his job. As a food inspector, he wields great power over small, family-owned restaurants. It's a power he doesn't hesitate to use. While preparing Jim's funeral, Veronica confides the secrets of her past to Father Greg (Luke Wilson), who may hold the final piece of this father-daughter puzzle."

The trailer effectively conveys the atmosphere, and some of the anguish, of that story. The film will be released on Kino Marquee. Ticket purchases help support art house theaters while they are closed.

Note, too, that The Criterion Channel will release a collection of Egoyan's films for streaming, including Exotica and The Sweet Hereafter, starting on July 26.

Do you feel this content is inappropriate or infringes upon your rights? Click here to report it, or see our DMCA policy.
Atom EgoyanCanadaDavid ThewlisKino MarqueeLaysla De OliveiraLuke WilsonRossif Sutherland

More about Guest of Honour