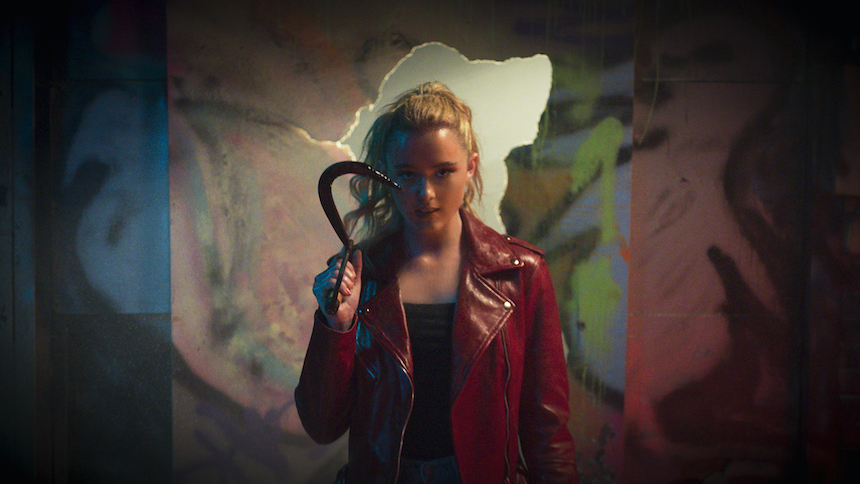 Over the last decade plus, writer-director Christopher Landon has quietly crafted a consistently engaging, stealth career as a filmmaker deeply conversant in the tropes, traditions, and conventions of the horror genre and a willing subverter of those tropes, traditions, and conventions. It ranges from the Rear Window with a coming-of-age combo of Disturbia in 2007, through key contributions to the found footage sub-genre, including Paranormal Activity 2-4 and Paranormal Activity: The Marked Ones, through the less successful teen comedy-undead hybrid of Scouts Guide to the Apocalypse, to the double career triumph of Happy Death Day and Happy Death Day 2U. His latest genre contribution, Freaky, a Freaky Friday meets Friday the 13th horror-comedy, doesn’t quite the Happy Death Day series for its brilliantly absurdist riff(s) on the moribund slasher sub-genre, but it comes incredibly close.

When we meet Freaky’s Jason-inspired, hockey-mask-wearing serial killer, Barney Calvin Garris / Blissfield Butcher (Vince Vaughn), he’s doing what he apparently has been doing for the better part of several decades without getting caught: sneaking up on self-indulgent, over-indulgent teens and gorily dispatching them with the economy and efficiency of an old professional going through the motions. (They’re the “first boys” and “first girls” that must be sacrificed to appease the body count gods of the slasher sub-genre.) Garris separates the teens from their eternal souls in gorily inventive ways, temporarily setting aside his butcher’s knife for common and not-so-common household objects like wine bottles, tennis rackets, and spear guns.

Garris escapes the scene of one slaughter with a new killing implement, an ancient Aztec knife imbued with supernatural powers. Landon and his co-screenwriter, Michael Kennedy, leave aside the question of whether Garris purposely sought out the Aztec knife for a magical ritual or simply lucked into it. He ends up using it on Freaky’s hapless heroine, Millie Kessler (Kathryn Newton), inadvertently when he spies her alone at her high school after a nighttime football game and can’t resist adding another teen to his ever-expanding body count. Intentional or not, the result leads directly to Freaky’s central conceit: Millie awakens the next morning in Garris’ rundown, broken down lair in Garris’ body, while Garris wakes up in the petite body of a high-school teen.

Millie-as-Garris naturally freaks at her newfound predicament, experiencing the not-unfamiliar body-swap discoveries involving genitalia, a larger physical frame (Vaughan is 6’5, Newton is 5’5), and living as a man in a masculine, patriarchal world. Garris-as-Millie, however, immediately takes to his new “murder Barbie” body, realizing that social conventions code blonde teens like Millie as virtually harmless, thus giving Garris-as-Millie ample room to restart his briefly interrupted killing spree in and out of the the halls of Millie’s high school. To that end, Garris-as-Millie swaps Millie’s loose-fitting, frumpy clothes for form-fitting jeans, t-shirt, and a short red-leather jacket.

Landon leans heavily on the Millie-as-Garris’ physical awkwardness for an initial burst of comedic humor, made all the more comedic by Vaughan, a naturally gifted physical performer, embracing his girlish, feminine side without crossing over into total caricature. Once Millie-as-Garris realizes his unfortunate predicament, she turns to Josh (Misha Osherovich), Millie’s gay best friend, and Nyla (Celeste O’Connor), Millie’s other, Black best friend. Landon imbues Josh and Nyla with just enough self-awareness that they can’t but remark at their worse-than-average survival odds given their identities and their unspoken presence in a slasher film. While Josh and Nyla have a better-than-anticipated chance of making it to the end credits, a swath of their fellow high-school students don’t, though outside of the slightly underwhelming climax, Freaky fails to match the four-in-one body count of the opening scene.

Freaky delivers enough inventive thrills, gory kills, and well-calibrated suspense to keep horror-comedy fans satiated, but it also succeeds due to a fully committed cast, a resonant emotional arc for Millie (from nerd zero to kickass hero) and her recently widowed mother, Paula (Katie Finneran), along with a healthily non-judgmental exploration, however briefly, on romantic relationships, sexual identity, and gender fluidity. In a revealing late scene, Millie-as-Garris finally connects with her longtime crush, Booker (Uriah Shelton), in the back of a car, less due to their physical attraction than their mutual love of poetry and romantic gestures. In a film filmed with often abrupt tone changes, the scene between Millie-as-Garris and Booker plays out without a trace of revulsion or repugnant, signaling that once the status quo returns to to the town of Blissfield, Anywhere, USA, the "final" kids will be alright.

Do you feel this content is inappropriate or infringes upon your rights? Click here to report it, or see our DMCA policy.
Alan RuckCeleste O'ConnorChristopher LandonFreakyKathryn NewtonMichael KennedyVincent Vaughn