Nightstream 2020 Review: CLIMATE OF THE HUNTER, Witchy Magic in the Rural Gothic 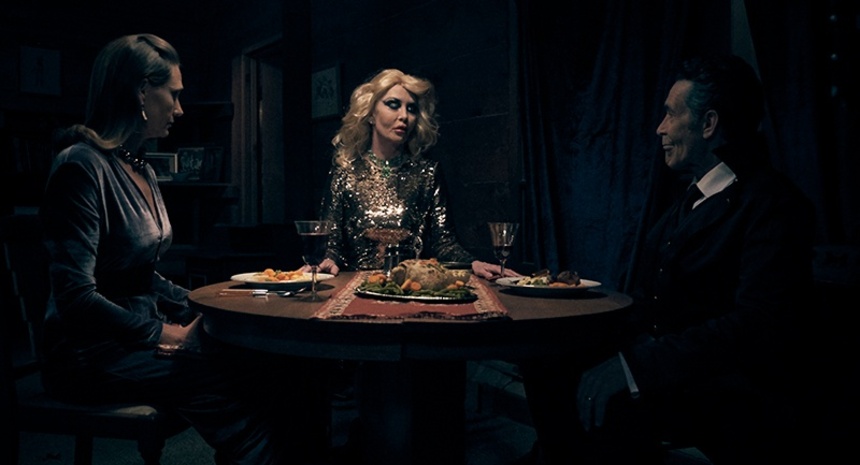 Sisters Alma (Ginger Gilmartin), something of a hippie-free spirit, and Elizabeth (Mary Buss), a D.C. lawyer who's wound a little tight, are at their family's old cabin in the backwoods, perhaps trying to reconnect with each other, but their bond is both close and grating for both of them, in their different styles and appraoches to life. Into their bristling yet caring relationship walks Wesley (Ben Hall), an old family friend, who has been living in Paris, and also returned to his family's old cabin. As the three meet and reminisce over dinner, and spend the ensuing days in each other's strange company, Alma begins to suspect that Wesley is a vampire, and she might need to kill him to protect her family.

This might sound like a great and grand gothic melodrama, but this is Mickey Reece's latest low-budget indie; the prolific Oklahoma filmmaker who finally gained wider notice with cult audiences in recent years with his 2018 feature Strike, Dear Mistress, and Cure His Heart. And like his other films, Climate of the Hunter, is an unstated and bizarre concockion, delving into some fanastic genre imagery, utilizing his style of a strange narrative, oddball characters, uncomon setting, with perhaps a bit more than a dash of gothic romance and sibling rivalry.

We've all heard of southern gothic, but Reece is dipping into what I might call American Rural Gothic; the strangeness of the rural in those states known as 'flyovers', where few international or even national travelers go, places usually presented as abandoned, dirt poor, and populated by meth labs. But Reece's rural middle America is just as suspetible to those strange monster lurking in the woods as New England or Louisiana, and this monster comes in the form of an old friend. But like old friends we haven't seen for many years, we are attached to our idea of them, rather than the truth as they as now.

Alma and Elizabeth are at odds with each other, both because of their shares desire for Wesley (or really, anything that might change the mundane existence they're experiencing, in this middle-of-nowhere), and their different paths. Alma might have alleged extensive emotional problems, but she has a daughter, and a free spirit; Elizabeth took the 'succesful' path and is now stifled and lonely. All of the characters speak to each other with an odd formality, choosing words carefully to try and exude some control over their lives and, in Wesley's case, seduce.

As nothing much happens to them (though perhaps Wesley might be a tad busy given his travels), they are free to muse on topics such as the nature of the universe and cosmic philosophy over their shared meals. Both Hall and Buss are regulars in Reece's films, and Gilmartin fits snuggly within this particlar universe, one where everything is just slightly out of synch and tone, where words seem, not artifical pre se, but somewhat forced as everyone tries to exert control even when they know that none is possible.

Reece's film is deceptively complex; aiming for a subtle and dark undertone, he allows the magic of the location (as far from the traditional gothic castle or plantation as one might find in America) and the witchy magic of older women, who still must fight to be seen and heard by the men around them. Reece's films are frequently about people invading someone's personal space (as everyone is invading Alma's) and trying to impose their will, and his particular indie style fits well into this subgenre of rural American films, where the magic is a bit more down-and-dirty, with ghosts of witches who perhapd fled from Salem a few hundred years ago.

Climate of the Hunter sets up a bizarre yet not completely unbelievable scenario, and drops in characters that have one foot each in reality and fiction, that proves compelling even as we (like them) question what and who can be believed.

Climate of the Hunter streams at Nightstream Film Festival this Sunday, October 11th.