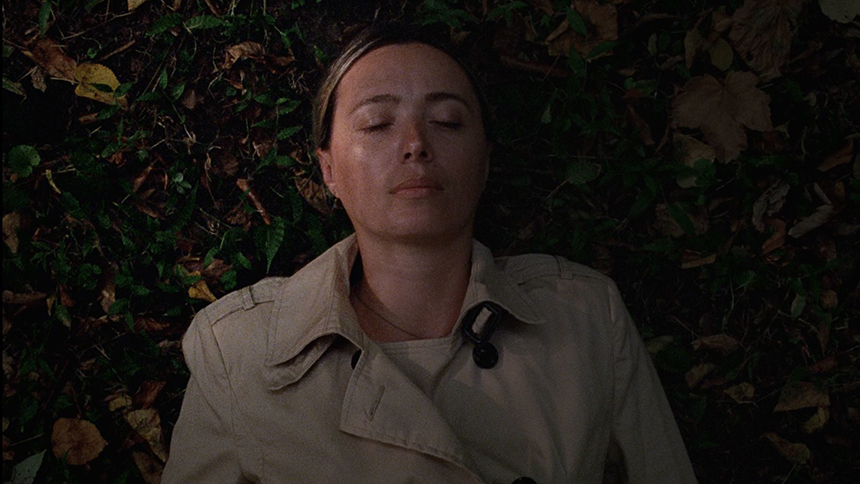 Georgian director Dea Kulumbegashivli's powerful drama Beginning has to be one of the most self-assured debut films in recent memory. Her approach in creating a suffocating, isolating environment for her main subject is so impeccably done, it easily invites comparisons to masters' work, such as Tarkovsky, Haneke, and Akerman. With its metaphysical tinge, it also resembles the work of its executive producer, Carlos Reygardas.

With its slow build-up, treading on the verge of religious allegory, the film demonstrates Kulumbegashivli's mastery in how a female is perceived in religious, patriarchal society. With its use of full frame cinematography reflecting the claustrophobic atmosphere of the protagonist's mental state, Beginning is a truly mesmerizing experience.

The film starts with a five minute uncut scene inside of a Jehovah's Witness church. From the fixed camera in the front of the room we see congregants milling in, greeted by the pastor, David (Rati Oneli, who is also a co-screenwriter) and his wife Yana (Ia Sukhitashivli). Soon after David starts his sermon on Abraham and him sacrificing his son before god, firebombs are thrown in, causing chaos.

Next we see the church engulfed in flames in the distance. The church happens to be in the middle of an empty field. It's stated that it's some religious fundamentalist's doing. And it's not the first time the violence was committed upon David and Yana. And the local cops aren't doing much about it.

Through the dialog, it is revealed that Yana doesn't want to be where they are. Their young son doesn't have any friends. Being a former actress now a pastor's wife, she feels life is going by, as if she isn't even there. Stubborn David still wants to concentrate on his career and asks Yana's unwavering support. She tells him forebodingly, "It's as if I'm waiting for something to start or to end."

The centerpiece of the film is a seven minute uncut scene of Yana going into a forest and laying down on the ground. She closes her eyes and lies there motionlessly. The whole world and the sound around her - birds chirping, the wind and the shadows casting on her face by the swaying trees slowly fade. Her peace is only broken by her son's nagging.

Her wish for some kind of change comes in the form of a devious character, Alex (Kakha Kintsurashivli). First seen in the burning church as a policeman, he comes in to Yana's house while David is away (to ask for elders assistant in building another church). He comes on to her aggressively, asking sexually explicit questions. Either paralyzed with fear or aroused, she starts answering his questions.

She is then raped by Alex at night in a violent attack near a creek. Just like everything taking place involving Yana and the world, the scene is observed from a far in a wide static shot and as impersonal as possible. Why did she go out at night? How did she end up near the creek? The question mounts.

Yana retreats to her mother's house with her son after the attack, but can't bring herself to tell her mother what happened. She thinks that Yana is having an affair. "Don't tell David if he doesn't know," she quips. Yana asks her why she didn't get a divorce from her abusive husband. "It was different times", she answers.

David finds out what happened by listening to security tapes in the house. With the shame and guilt she feels, even though none of it was her fault, she breaks down sobbing. How could you do this to me after what I have done for you- is how David plays out the scene.

As the film reaches a shocking conclusion, suggesting that Alex might be a physical manifestation of Yana's fears/wishes in order to escape her suffocating life, it becomes a strong indictment of religious patriarchal society. Sukhitashivli in a very demanding role gives quite possibly the performance of the year. Beginning signals an impressive arrival of another major female director, Kulumbegashivli, to the current global cinema scene.

Do you feel this content is inappropriate or infringes upon your rights? Click here to report it, or see our DMCA policy.
Dea KulumvegashivliGeorgiaIa SukhitashviliKakha KintsurashviliNew York Film FestivalRati Oneli