Director Mario Piredda's feature debut stars Nora Stassi, Luciano Curreli, and Piero Marcialis and is as capricious and unchained as a teenage spirit, but with a political message.

The feature-length debut The Lamb by Italian director Mario Piredda dedicates its first scenes to an actual lamb birth and unfaithful outcome before introducing the human protagonist. The documentary lenses re-focuses soon on a 16-year-old firecracker Anita, who takes home the lamb to nurture it into survival. "I've also been left without a mum, but I've never stopped eating," she notes factually.

Symbolic overture shifts to human plight as Anita and her father Jacopo are waiting for results that will determine whether Anita is a good match for a marrow transplant to save her father. In the meantime, Piredda follows the odd father-daughter couple in rural Sardinia. She lost her mother but maintains a rather informal relationship with her father, calling him by his first name, cracking jokes, and doing pranks.

Piredda portrays Anita as a brash and revolting wild card on the outside, a performance that hides and suppresses her tender and alienated inner self. She engages the defense mechanism to full throttle, which makes it look like a result of negligent upbringing and total absence of respect for any kind of authority whatsoever. As the initial scene explicitly details, life is not easy in the Sardinian countryside.

Instead of social drama, Piredda segues to a more intimate coming-of-age and family drama, as Anita will have to mend old sibling wounds. Furthermore, Piredda frames the story of Anita's family reconciling over a looming tragedy into an actual and pressing local context.

NATO military base lies near the protagonist´s family farm as a matter of fact, since the 1950s NATO has been pretty busy with transforming a large part of Sardinia into bases for drills, testing of new weapons, and fuel dumping.

The locals do not share the catalogue-perfect picture of Sardinia as a paradise on the island. For them, the day-to-day reality bears the names of military occupation, radioactive nightmare, and toxic contamination.

Piredda does not make the denouncement the front and center of his feature debut, quite the opposite, the state of events is loosely implied relying on the knowledge of domestic circumstances. Anita´s family experiences directly the effects of weapon testing and their disastrous impact on the health of residents. With the accountability of culprits virtually non-existent, the locals have to fend for themselves.

The Lamb puts the main focus on Anita´s hijinks and her misfit uncle´s prodigal return back to the family. The coming-of-age plot is superimposed over the socio-political subject that got hardly picked by the mainstream media, Piredda and his co-writing partner Giovanni Galavotti careful to point fingers and organize public tribunals.

They quickstep delicately around the toxic issue remaining highly careful of mentioning "oppressive military presence" and "weapon experiments for the enrichment of the factories of death" which have been the topics of demonstrations of local Sardinians in recent years.

The film eventually turns out to be a celebration of family short of any bathos, schmaltz, self-pity and teary-eyed kitsch. Besides sophisticatedly encoding the condemnation of decades-old controversy with social, health, and environmental consequences, The Lamb charm lies in the film´s elegant freewheeling form.

The scenes and dialogues do not elicit the sense of cold premeditation and calculation relying on trusted-and-tested schemes. Instead, the family drama veiled as rural comedy feel less staged and based more on free interactions of characters.

This way, it appears that Piredda narrates outside the jaded templates and routine structures even for the price of little unpolished structure. What is more important, he and the film´s cast succeed in eschewing any kind of on the nose agit-prop result that the topic inherently possesses.

The political message prevails nuanced and the relation between the incidence of tumors and malformations in animals and the mysterious bases, that Anita is forbidden to enter (which she does) and her uncle is discouraged to pick junk at (which he does), are left to audience´s imagination albeit the connection remains hard to be overlooked.

Mario Piredda however unwittingly shot an Italian remake of Athina Rachel Tsangari´s Attenberg, as the two films share an uncanny resemblance. Marina´s sexual encounters and explorations are replaced by Anita´s search for her place in the world through her teenage revolt and unbound temperament. 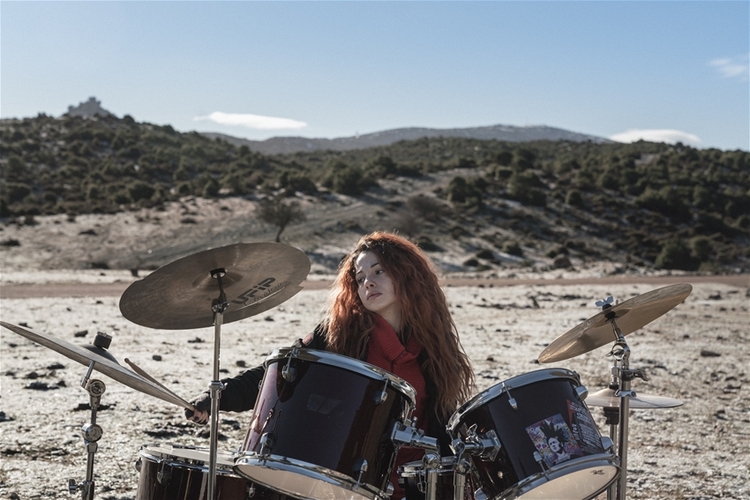 The styles of both films differ notably, Tsangari´s idiosyncratic approach opposed to Piredda´s loosely structured plot anchored in Sardinia´s countryside that spotlights the plight of locals. It remains still a strange case of parallel thinking instead of plagiarism that points up to similar issues and their perception taking place in different parts of the world.

Unlike Attenberg, The Lamb´s political message bears urgency even if the story is veiled in the exploits of the unchained capricious spirit of a wild teenager.

The film enjoyed its international premiere at the 2020 Prague International Film Festival - Febiofest.