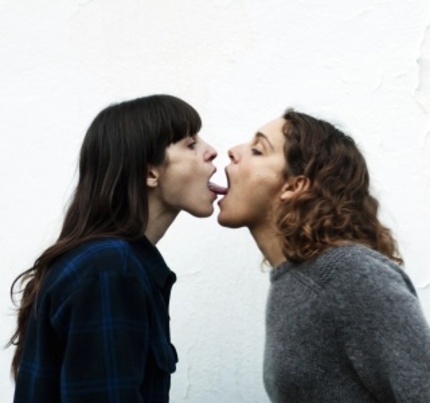 This year the IFFR shows another collaboration of these two although this time the roles are switched: "Attenberg" is directed by Athina Rachel Tsangari and produced by Giorgos Lanthimos (who is also one of the actors in it).
The end result seems to be as award-prone as "Dogtooth", with leading lady Ariane Labed already picking up a Coppa Volti for Best Actress at the Film Festival in Venice.

The trailer (included here at the bottom) implied a humorous and off-kilter look at several adult subjects. So does the movie deliver? Read on!

Twenty-three year old Marina is close to exactly two people: her father Spyros and her friend Bella. But as her father starts entering the final stage of his terminal disease, Marina wants to learn how to open up to other people as well. Not just because she fears loneliness, but also because she is curious about this thing called sex, a subject Bella seems to be very familiar with but which is still weird and alien to Marina...

At the start of the film you see a wonderfully weird conversation between Bella and Marina, the first of many in "Attenberg". Marina has an odd way of communicating: she fires off strings of formal, clipped comments and questions. These include embarrassing statements, brutal honesties, general observations and scathing remarks seemingly without distinction. It's as if language itself is a barrier Marina has raised to keep the rest of the world at a distance, and only her father and Bella are able to return this kind of communication.

Spyros has been raising Marina by himself for years, and their bond is very gentle and strong. And Bella is a true friend in the best sense of the word, never getting angry at Marina's odd behavior and always willing to join her in a train of thought or some weird action. For proof of this just watch their collection of hilarious funny walks, shown as episode-breaks throughout the film.

When Marina starts to look at the world beyond these two people, it almost feels like an expedition. Marina is not dumb or damaged, but extremely, almost autistically set in her own ways. It means that any new thing she tries, any new contact she instigates, gets done with a clumsy, leaden seriousness. Thankfully, the world she reaches out to turns out not to be a particularly unpleasant one.

Notice that in the above I've described the three main characters as if they are real, and that is because during the film it totally seems that way. Instead of visual trickery, director Athina Rachel Tsangari is happy to just show these people go about their business, almost as if they are in a documentary.

And because the acting is so strong it totally works.
Ariane Labed is fantastic as Marina, a character so stiff, yet so quirky at times that it is amazing she never becomes a caricature. As Marina's manner of speech does not allow for any emotion whatsoever, Ariane needs to do nearly all the acting through her eyes and suppressed body-language.
The other actors are very good as well, all bouncing off of Marina's character like she is a wall.

Kudos to Athina Rachel Tsangari for allowing her small ensemble of actors to shine the way they do. Her "Attenberg" expertly focuses on its own strengths and spends no time on anything else.

Winning you over by way of sheer acting power and a simple script with quirky yet believable characters, "Attenberg" is a nice, gentle and at times pretty funny drama. Don't expect to be bowled over but there is a good chance you'll be impressed.

The audience in Rotterdam liked it as well and gave it a rating of 3.6 out of 5, which is half a point too low in my opinion.

Do you feel this content is inappropriate or infringes upon your rights? Click here to report it, or see our DMCA policy.
Athina Rachel TsangariAriane LabedYorgos LanthimosVangelis MourikisEvangelia RandouDrama