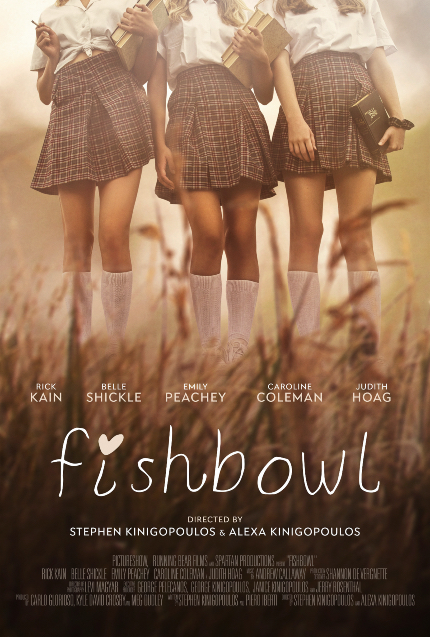 In less than a minute, our exclusive clip from the upcoming indie thriller Fishbowl touched a nerve deep inside my subconscious.

"Punishment" is a term that strikes a chilling yet familiar chord for many who were raised in religious households. If a parental figure metes out punishment, it is invariably meant to be a teachable moment: do not repeat what you did that was wrong and thus deserving of punishment. Directors Alexa Kinigopoulos and Stephen Kinigopoulos' feature film debut, Fishbowl follows what happens to a family of five when their dear mother (Judith Hoag) disappears.

Living in a small town, the three daughters -- Emily Peachey, Caroline Coleman, Belle Shickle -- are "trying to cope with the absence of their mother ... and maintain a normal life," according to the official synopsis. At the same, they are also "enduring Catholic school and typical teen struggles under the watchful eye of their demanding teacher, Mr. Barnes (Delaney Williams). Silently repressing them is their damaged father (Rick Kain) who, quite adrift himself, is growing increasingly obsessed with The Rapture that he believes is imminent.

"For the girls, home is anything but a refuge. In the midst of rebellious acts, punishments, and religious imposition, the sisters must cling to one another to survive. On the night that Rick believes to be The Rapture, he will attempt to take his daughters to 'the other side,' but as the bell tolls, true colors shine through and the mystery of their mother's disappearance is revealed in a shattering climax."

Our clip comes right after Mr. Damaged Father has come across 'party costumes' in his home that set him off something fierce, prompting some tearful punishment that feels quite harrowing.

George Pelecanos served as Executive Producer, which is what caught my eye in the first place. A superb novelist, Pelecanos also has done tremendous work on the small screen for shows like The Wire, Treme and The Deuce. All this suggests that the film will cut deeper than might be expected.

Fishbowl will open in select theaters and on demand October 27. Watch the clip below.