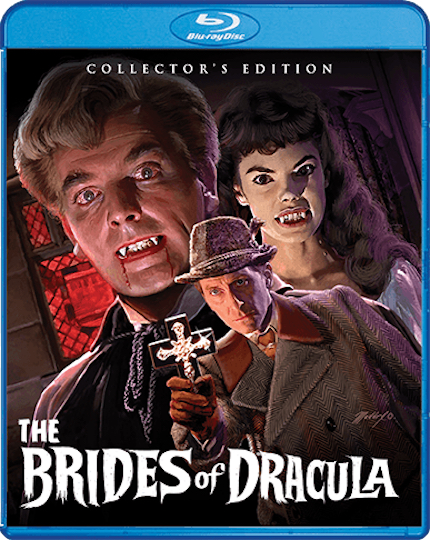 Today's Blu-ray review may not be available in time (the North American street date is November 10) for the spookiest time of the year, but if you're like me, you love all things creepy year round.

I know I keep saying it, but Shout Factory/Scream Factory continues to impress with their acquisition of older titles from Hammer's filmography. Then of course, the restorations the company does with these films are usually nothing but absolutely astonishing.

One of these forthcoming older titles is The Brides of Dracula, released sixty years ago in 1960. The film was directed by Terence Fischer, arguably Hammer's best director. He helmed cornerstones of the production company's business, such as Frankenstein Must Be Destroyed, The Phantom of the Opera, Frankenstein Created Woman, Horror of Dracula, and The Devil Rides Out.

Some fans are fine with The Brides of Dracula NOT starring Christopher Lee, Hammer's iconic Dracula, while others are hesitant to embrace this title. According to one of the disc's bonus featurettes, Lee was not included in this film because his agent asked for too much money. He did, however, appear in Dracula: Prince of Darkness, which was released in 1966.

Anyway, the film follows Marianne (Yvonne Monlaur), a young teacher on her way to the girls academy where she's about to start a new job. Along the way, she's sidetracked by a minion of the local Baroness Meinster (Martita Hunt) and Marianne's coach disappears with all her luggage, leaving her stranded.

The Baroness then invites Marianne to her castle to stay the night. While there, she glimpses a man (David Peel) on a balcony, seemingly about to jump to his death. She rushes to his room only to discover that he is chained by the ankle to the wall. Ever the good samaritan, she sneaks into the Baroness' room and somehow finds the correct key that unlocks the young Baron.

Well, nice job, you just unleashed a vampire! Although I'm not sure what kind of weak-sauce vampire can be be simply chained to a wall by one leg. There are other plot holes and omissions, elsewhere in the film, too. We learn in one of the bonus features that Fischer was not allowed to change a word of Jimmy Sangster's script. Though if you're not put off by that, The Brides of Dracula can still manage to entertain. In particular, this film would make a good "gateway" horror film for kids who are inclined to the darker side of storytelling.

A few local maidens end up undead as well, in campy, white-face-paint fashion and flowing white nightgowns. To aid in the mystery of the attacks, Dr. Van Helsing (the late, great Peter Cushing, one of Hammer's best actors and bankable stars) arrives and astonishes the villagers with his down-to-earth reason and rationale. You may have guessed that Van Helsing and the Baron face off in the finale. By the way, Cushing did many of his own stunts back in the day, and he's really impressive here when he battles the Baron.

I have to say that Peel as the Baron isn't great, but Freda Jackson in the Renfield-like role of Greta, the Baroness' assistant, was absolutely fantastic. She cackles like no one's business when plotting evil deeds and making nefarious plans. Watching the film for both her and Cushing alone is worth your tim.

As for the image, the film looks absolutely spotless with only a slight flicker in one scene that I detected. Shout Factory has presented The Brides of Dracula in both 1.85:1 And 1.66:1 aspect rations, but for the purpose of this review, I watched only the 1.85:1 version.

The trailers Hammer made were always entertaining, so check those out if you pick up any of these releases. The Terence Fischer mini doc was lengthy and informative of his life and career, and the other featurettes served a similarly "fine" purpose.

I enjoyed Severin Films' featurette on the history of Oakley Court the most; it's a large stone manor that quite a few films have used as exteriors, including The Brides of Dracula and several other Hammer films. The most famous production to use this location is The Rocky Horror Picture Show.

If you'd like to pre-order The Brides of Dracula Blu-ray, you can do so at Shout Factory's website here.