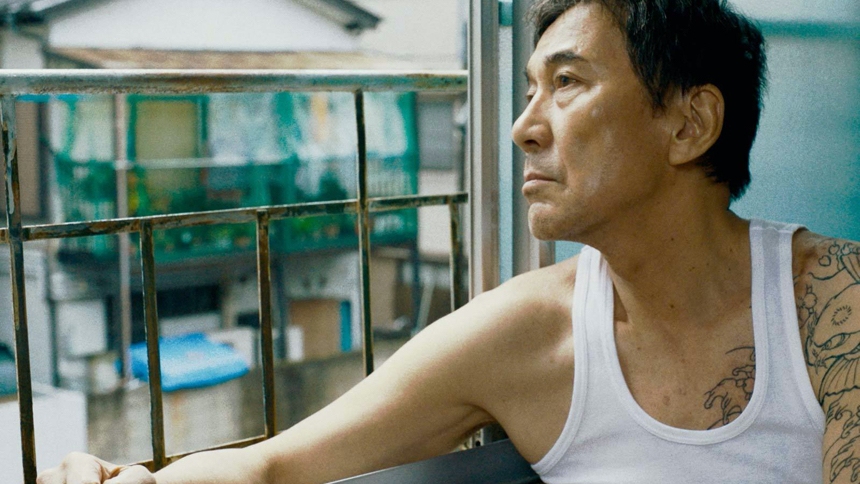 At the midpoint of Under The Open Sky, Mikami Masao, the ex-convict at the heart of the story, observes, “Prison is the one place they do not throw you out for bad behaviour.”

After several on again off again prison sentences, the latest one a 13 year stretch for murder, Mikami, an aging heavy -- his handle was The Brawler in Yakuza circles -- is determined to go straight upon being released in the gently drifting snow to no family, relatives nor friends. He plans on getting a modest job, perhaps making Kendo uniforms or a becoming chauffeur or deliveryman.

The Yakuza, as depicted here in quiet, petty sadness, is a sunset industry.

Mikami also aims to track down his mother, whom he has not seen or heard from since he was a teenager more than 40 years prior. Over the course of an emotional two hours, we watch a multitude of tiny successes and failures towards these goals, as his world goes from the black and white and steel grey world of prison life to the complex, multi-hued world of the lowest rung of Tokyo society.

Mikami has to navigate the nuanced particulars of Japanese society in a way that gangster life and the prison system offered him an easy avoidance. In Yakuza life, his temper was indulged, and in jail, his routine was set. He was a model prisoner, in fact. Upon his release to a lonely bus ride into the social welfare system, we see him discard one of his only possessions, an expensive but broken watch. The metaphor is perhaps not subtle, but it is an apt gateway into the bittersweet drama that follows.

Director Nishikawa Miwa, whose work I was unfamiliar with prior to Under The Open Sky -- I will be eagerly going through her back catalogue of half a dozen features after seeing her masterful work here -- apprenticed under Kore-Eda Hirokazu, the maestro of a visually intimate, but emotionally savage, modern Japanese arthouse. She also evokes Ken Loach and Mike Leigh with her myriad depictions of the working class and a downtrodden ensemble that gently swings into orbit around Mikami, subtly played to a career high-point by Yakusho Koji.

The prolific Japanese film star who possesses one of the great hang-dog resting facial expressions has hit over 100 acting credits, ranging from gonzo foodie classic Tampopo, to most of the creepy horror oeuvre of Kurosawa Kyoshi, to popular mainstream hits like Shall We Dance?, to Hollywood Oscar-Bait such as Babel, Memoirs of a Geisha, a Palm D'Or winner The Eel, to unclassifiable explosive punk-genre entry, The World of Kanako, and to big budget Edo-era samurai and sword adventures from later period Miike Takashi. To say Yakusho has range is simply beyond an understatement. However, Nishikawa focuses on his particular subtle, and everyday, screen presence. Watching Yakusho have his pulse taken by a prison guard, or shampooing his hair, or operating a sewing machine, can make for surprisingly compelling and engaging cinema.

There are a number of scenes featuring the frustration of Mikami taking his driving test. His documents expired while he was on the inside, and the state bureaucracy wants him to re-prove his worth. Government offices, and welfare interviews test his patience, threatening a back-slide, even as he is oddly comfortable with being ‘marched,’ of which he takes a curiously exaggerated pleasure in the process, from one set of paper pushers to the next.

The vast array of unknowns also threatens his health, as he has developing a blood pressure condition, paradoxically from compounded stress and age, and sedentary prison life. His dignity is on the line, a fault line of small joys, simmering rage, and unfathomable regret for taking the ‘easy path’ in life. That includes the loss of time with his family, his mother, his wife, and potentially his children, due to many of the non-choices he let drift past.

Meanwhile, a television producer and director look to exploit Mikami’s situation in the form of a reality show, by the lure of funding the Mikami’s search for his mother; much more bureaucracy must be navigated, due her own sordid background. The comically introverted director has little taste for it, and instead becomes fascinated with the non-sensational aspects of Mikami’s new life. In a way, Under The Open Sky often plays slightly meta, as if we are watching the movie that this director would have made, free from the cheap tactics and facile stories of popular television and given a budget beyond his commercial-grade DSLR camera.

Mikami also befriends a local shop keeper; that in itself is a fascinating lesson in how actually listening to one another, instead of being led by assumption, indeed makes the world a better place. Not all heroes wear capes. It's a reminder that there is dignity in any work, and work done well. Is this a justification of the stuffy, conservative politics of the silent majority of Japanese citizens? It is not at all an easy question to answer, and you will find few answers here. Nor, necessarily, should you.

One of the entrancing things about the filmmaking here is Nishikawa playing with the cinema tropes of gangsters, social redemption, and the English kitchen-sink social drama. With quiet brush-strokes, she gives them a life of contradictions and surprises. It is not so much deconstruction as it is human observation. The expected and unexpected come together in a fragile balance, Under the Open Sky. This kind of cinematic balance should be celebrated. If you loved Kore-Eda's Shoplifters, you'll want to take the time to discover this one.

Do you feel this content is inappropriate or infringes upon your rights? Click here to report it, or see our DMCA policy.
DramaJapanNakano TaigaNishikawa MiwaPrisonTIFF2020Yakusho KojiYakuza

More about Under The Open Sky