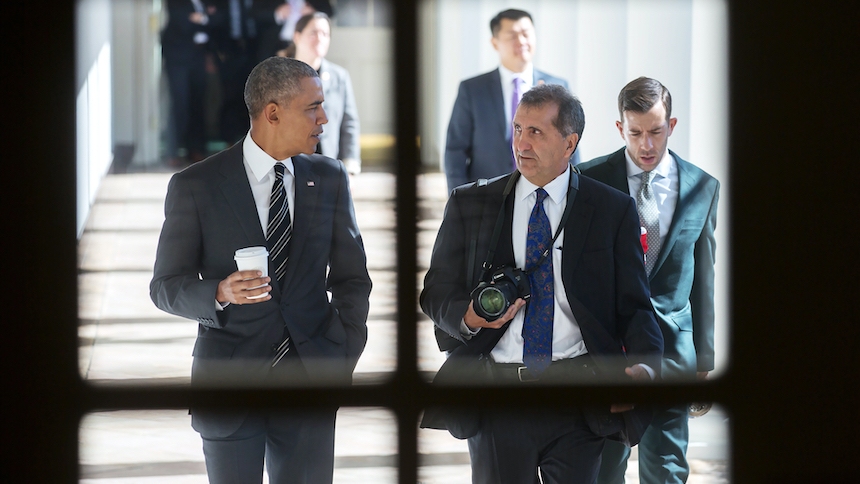 Four years ago, only a few Obamaphiles knew who Pete Souza, then the senior White House photographer, was.

With a career that began before Ronald Reagan arrived in the People’s House, through an extended stint as White House photographer under Reagan, through an assignment covering Senator-Elect Barack Obama and his family’s first year in D.C., through, of course, his eight-year run in the Obama White House, Souza chronicled Obama, his family, and his White House during the most intimate and personal of times, but also through the most public and world-changing of times. Souza saw himself as a chronicler, as a photojournalist, and ultimately, a first-draft historian, not the potential subject of Dawn Porter’s (Good Trouble) poignant, if uncritical, documentary, The Way I See It.

The Way I See It offers a magical non-mystery tour through Souza’s decades-long career as a photojournalist, using the usual assortment of talking heads, archive photos, contemporaneous videos, and Souza’s book tour for his second book, Shade: A Tale of Two Presidents, roughly two years, to anchor an insightful, nostalgic documentary.

On its own, The Way I See It serves to give interested viewers and audiences a rare, behind-the-scenes look at both the Reagan and Obama administrations, but more importantly, a humble, self-effacing photojournalist tasked with recording living history, not becoming a part of it (arguably impossible, if admirable either way). For Obama’s onetime and current supporters, however, The Way I See It also functions as a temporary if no less, welcome respite or soul-balm from the current administration’s daily assaults on the rule of law and democratic norms.

After Souza retired from the White House almost four years ago, he focused on producing a mammoth, coffee-table book on the Obama years, Obama: An Intimate Portrait, culled from thousands of photos, but it wasn’t the Obama book that brought him to social media prominence. After Donald Trump’s unexpected win over former Secretary of State Hilary Clinton in 2016, Souza initially didn’t intend to publicly comment on what he saw as Trump’s failure to uphold the values and norms of a president of the United States.

Souza ultimately decided to break his silence, however, through his Instagram account, juxtaposing the current occupant of the White House’s social media meltdowns, grade-school taunts, and bully-boy threats with Obama’s carefully calibrated, carefully circumscribed behavior during his eight years in office. Less than surprisingly, Souza became not just a social media sensation, but a reluctant public figure in demand by cable news and morning shows for his views on the current and former occupants of the White House.

For Souza, Obama’s defining trait, his empathy, defined Obama’s presidency, though Souza and, by extension, Porter readily acknowledge that as the first African-American president, Obama was always keenly aware of his place in history and in making history every day he remained president and acted accordingly personally and publicly. When Obama expresses empathy ― a trait presidential scholar Doris Kearns Goodwin, interviewed here, considers essential to leadership ― for example, when he visits the grieving Sandy Hook families or leads a stirring rendition of “Amazing Grace” at the Mother Emmanuel Church service, he’s fulfilling what Souza, as someone who spent more time in Obama’s life than practically anyone else (he was on call practically 24-7-365 during Obama’s two terms in office) perceived as a central, if not the central, function of a U.S. president, to heal and unite, not to wound and divide. Some would call that naive, but others would call that exactly what we can and should expect from our leaders.

While ostensibly centered on Souza’s professional and, on occasion, personal lives, The Way I See It takes a decidedly hagiographic point-of-view on Obama and his administration, focusing uncritically on his eight years as the leader of the free world, everything from the passage of the Affordable Care Act that delivered affordable healthcare to tens of millions to the assassination of the man who masterminded the 9-11 attacks, Osama Bin-Laden, while unsurprisingly leaving any missteps or miscues on the cutting room or camera room floors.

Ultimately, The Way I See It is less about the Obama administration, its policies, and its successes or failures over the course of eight, fractious years, and far more about Souza saw and continues to see the 44th president of the United States, about a platonic romance between Souza’s subject and Souza’s ever-present lens.

The Way I See It is now playing in select U.S. theaters via Focus Features and will air October 9 on US. cable channel. MSNBC.

Do you feel this content is inappropriate or infringes upon your rights? Click here to report it, or see our DMCA policy.
dawn porterdocumentaryDoris Kearns GoodwinFocus FeaturesPete SouzaSamantha PowerUS