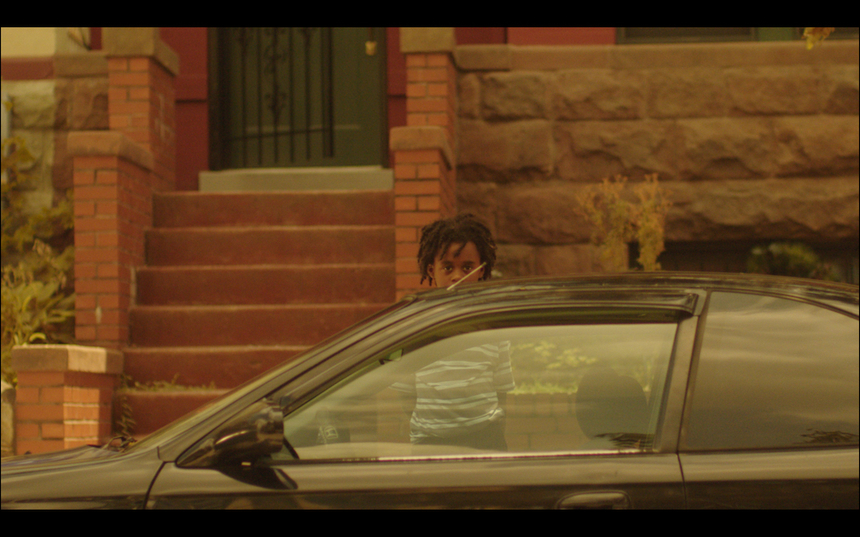 What is home? Is it the place you grew up? Where you parents reside? Just the general neighbourhood, or the whole town? What does it mean to move back again, and what differences in you as a person would make coming home a hostile act? 'You can't go home again' is a loaded and layered expression, but an accurate one. Welcome is uncertain, friends may or may not have open arms for you, and the place might no longer be 'yours'.

In Merawi Gerima's feature debut, a young man finds that coming home feels like walking into a surreal dream-turning-nightmare, when the place he loved and wants to honour no longer is there to welcome him back. Residue is thoughtful and quietly powerful meditation on the idea of home, the ramifications of white gentrification in Black American neighbourhoods, and how, and if, we can do honour to our past and the places that shaped us, if we have become too far removed from them.

When Jay (Obi Nwachukwu) returns to the Washington DC neighbourhood where he grew up, he is 'welcomed' by a white resident who tells him to turn down his music or he'll call the police. Hardly a friendly greeting in this once-Black area to a former resident, and that's the first moment that Jay notices there's something wrong. A filmmaker who has come home to write a screenplay based on his childhood, he finds only a few of his former friends and neighbours still hanging on, most having given in to the aggressive realtors who buy their homes for ready cash, then flip them to white people, who then demand a more 'respectable) environment.

With a handheld camera and a focus on close-ups, Gerima shows us Jay's perspective as one which is bathed in a surreal light, the sunlight at once warm and harsh, with proverbial barriers that he keeps running into, as he tries and fails to find the world of his childhood. As he searches for his old pal Dmitri (who know one knows, or at least will admit to, his currently location), is becomes a call for what has been lost to time and gentrification. As he tries to write his screenplay, his memories play out like dreams during an afternoon nap, at once shapr and blurried, with truths mingling with the distortion of time, as Jay realizes there is much violence he blocked out.

Too many of his friends have either moved away, or are dead, or in prison; his girlfriend, his few remaining friends, his parent's friends, the old men of the neighbourhood - all seem to have resigned themselves to slowly being pushed out, or dying still holding on to the last light. They stayed in the pot of boiling water, adjusting as they had to; Jay has jumped in, and his rage is palpable. He is barely able to contain himself, his anger only kept in check by those around him. Gerima moves between Jay's confrontations with himself and what it means to come back to this. He is hesitant to admit that, that he is changed as much as his old home, and that change is incompatible, even if gentrification wasn't happening. He is almost as much of an interloper as those who have driven his friends away, as he brings with him an outsider's perspective.

Washington DC is something of an anomaly for me as an outsider to the USA, in that, unlike a lot of other American cities, I have little knowledge of its cultural identity. My guess it that it gets overshadowed due to the city's role as the nation's capital. But no doubt it has an identity, likely one fiercely protected by its residents, especially those who do most of the living and working and dying in it; and like many American cities which were places of refuge and live for Black Americans, they now see the cultural they made turned into a commodity that they are no longer welcome to.

(White people remain on the periphery, literally: we never see their faces in full, as this is the story of how they distort and destroy, from the neighbour with his 'friendly' orders, to the girl who refuses to clean up her dog's poop, to the realtor who leaves notices on the doors of Black people's homes desgined to appear as if they haven't paid their bills. It reminds us, especially in the final shot, how the history of Black neighbourhoods is too often told through white filters.)

Gerima wraps his film in a visual and aural landscape that wraps like a bubble around Jay - he is trapped inside it, with everything filtered as if through a prismed bubble. Its colours are rich and yet at times infused with an autumnal tinge, as if indeed this is the autumn of this space and place before an indefinite winter of discontent. Residue frames how a place of beauty and family and friendship, one where people looked out for each other, has become strained, slowly being stripped apart. Jay's final action is both completely understandable and extremely upsetting, knowing what terrible fate might in store for him, even as he fights to the last for the place he once called home.

Residue will be released by ARRAY in select theatres and on Netflix on September 17th.

Do you feel this content is inappropriate or infringes upon your rights? Click here to report it, or see our DMCA policy.
ArrayDennis LindseyDerron "Rizo" ScottMerawi GerimaObinna NwachukwuResidueTaline Stewart