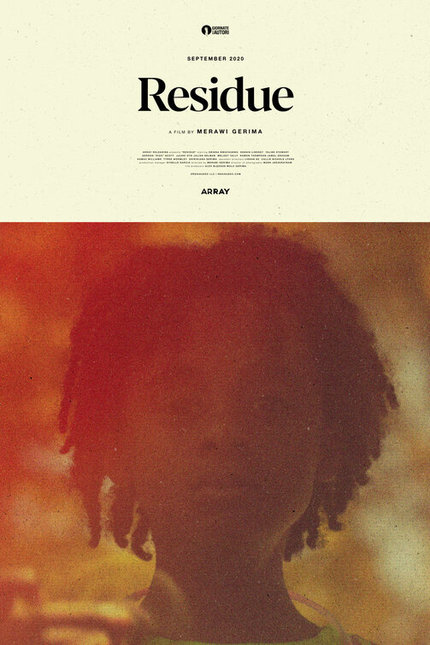 I think we've come to accept that all festivals for the rest of the year (and possibly beyond) will be either partially and or entirely online. While there are disadvantages, there are definitely advantages, not the least of which is accessibility to a larger audience. Following in this path is Mammoth Lakes Film Festival, taking place in September. And not only will the festival be online with features, documentaries, and shorts, but there will also be a wine tasting event. That's exclusive to residents of California, but still, a unique and pretty awesome feature.

Residue, the narrative feature debut of Merawi Gerima, will open the festival (it was recently picked up by Array, Ava DuVerney's company, which is a sign of the film's quality and caliber). You can read some of columnist Kurt Halfyard's thoughts on its haunting poster. The Canadian cringe comedy Tapeworm (reviewed here by Teresa Neiman with hearty approval) will also screen, as well as what sounds like a very cool vampire film, Desire Path by Marjorie Conrad, and the interestingly-titled The Wind: A Documentary Thriller (those last two words are not often side-by-side). There will also be more than a few dozen shorts (always the hidden gems of a festival), in narrative, documentary, and animation form.

Some films will be geoblocked to the United States or California, but some will be viewable from anywhere in the world. Tickets and passes will go on sale this coming Monday, August 24th, so check the website at that time to know which films you can access from your corner of the globe. Full details are in the press release below, and a link to the festival's website.

Today, the Mammoth Lakes Film Festival (MLFF) announced that their sixth iteration will take place online from September 16-20, 2020. This announcement comes following their decision in March to postpone the annual Memorial Day weekend event amid the COVID-19 pandemic.

The festival also announced the line-up of feature film programming and in-competition selections that will screen online, which includes the World Premiere of Desire Path, directed by Marjorie Conrad. The festival will open on September 16 with the West Coast Premiere of Residue, directed by Merawi Gerima. The film was recently acquired by Ava DuVernay’s ARRAY and will be released on Netflix.

In addition to the online screenings, the festival will also be implementing a variety of virtual and interactive programming including live filmmaker Q&As, industry panels, filmmaker meet-ups, and even virtual wine tastings.

“While the delivery of films online will be different than in year’s past, the Mammoth Lakes Film Festival continues its commitment to showcase the work of emerging and innovative filmmakers remains the same,” said Festival Director Shira Dubrovner. “Thanks to the virtues of technology that can host a communal film going experience, we are excited to bring these works into people’s homes and promote the exchange of ideas and storytelling these films evoke.”

Director of Programming Paul Sbrizzi added, “The one thing that will be same this year is a lineup of wonderfully eclectic and thought-provoking films that people have come to expect from us. We’re proud to offer this platform for these truly inspired artists to share their work.”

Desire Path (USA) – A young woman walks down a desire path next to her house and invites a demonic figure into her life in this vampire film with an elliptical plot, minimal dialogue, and characters that are defenseless against their drives. Directed by Marjorie Conrad. World Premiere

Residue (USA) - A young African American filmmaker returns home after many years away to write a script about his childhood, only to find his neighborhood transformed by gentrification and his childhood friends scattered to the wind. Directed by Merawi Gerima. West Coast Premiere

Revolution Launderette (Japan) - A young man dogged by misfortune sets out to beat his existence to its next punchline, together with a young woman who obsesses over a stranger’s old scrapbook, in this jazzy, free-form tumble of wildly imaginative imagery set in Tokyo. Directed by Mark Chua and Lam Li Shuen. North American Premiere

Tapeworm (Canada) - If — as Chaplin said — life is a tragedy when seen in close-up but a comedy in long shot, then this group of nobodies trudging through a woeful existence in dreary Winnipeg is seen in a medium. Directed by Milos Mitrovic. West Coast Premiere

Democracy on the Road of Saveh (Iran) - An up-close look at the grotesque political maneuvering in the run-up to council elections in a district outside of Teheran — a humorous take on the challenges posed by democracy in Iran. Directed by Turaj Kalantari. North American Premiere

Feather and Pine (USA) – A poetic, visually stunning portrait of a northern California logging community and a young couple being pulled apart by conflicting ambitions in in the wake of the Great Recession. Directed by Star Rosencrans and Michael James Beck. West Coast Premiere

Pier Kids (USA) – Caught up in the precariousness of survival and self-preservation, homeless queer and trans youth of color hang out at Christopher Street Pier, standing up to homophobia and abuse and forging their own chosen family. Directed by Elegance Bratton.

The Wind. A Documentary Thriller (Poland) – Poland's Halny wind comes in cycles, every spring and autumn, sometimes turning into a destructive gale that creates a setting for a wild performance of human struggle against the destructive forces of nature. Directed by Michał Bielawski.

Tickets and passes for the festival will go on sale Monday, August 24. Ticketholders will be connected to the Eventive streaming platform to watch the films when they purchase their pass. The wine tasting events will be held in partnership with two California-based wineries, including Mastro Scheidt Family Cellars, and will take place on Friday, September 18 at 5:00 p.m. PT and Saturday, September 19 at 5:00 p.m. PT.  For more information, visit www.mammothlakesfilmfestival.com.