In director Spike Jonze’s Adaptation, screenwriter Charlie Kaufman is in the film as himself played by Nicolas Cage. That character puts his own spin on the book in that film when he is tasked with writing a screenplay for it. Charlie Kaufman, who wrote and directed I’m Thinking of Ending Things has applied his own audaciously original adaptation to an already twisted horror-thriller novel from Iain Reid. This gloriously dark puzzle box about discerning what is, who is and where is does not break the fourth wall like his other works, yet the film demands at least a second viewing to confirm the conceivable, or tangible as Charlie Kaufman plays with genre expectation and time to deliver an ultimately sad portrayal of loneliness and isolation.

...but the alternative requires too much energy” unnamed girlfriend (Jessie Buckley, Beast) says to herself, drifting in internal monologue during a desolate snow swept road trip to the furthest reaches of rural America. She is considering breaking up with her boyfriend Jake (Jesse Plemons, The Irishman, Fargo). He is her partner of seven weeks? “I should remember, but I don't,” she says hazily. “This road trip is a reminder of life outside your head” Jake remarks on their way to his family farm for the first time, or the last time. Her inner monologue is a lifetime of sadness, influenced by poets, thinkers, philosophers, scientists; a nihilistic worldview as she seems wise beyond her years. Between thoughts, when her and Jake do converse they seem to have a lot in common, the same intellectual pursuits and favourite writers, and yet each scene tinged with slight resentment.

“You can’t fake a thought.”

Before the trip, she is waiting to be picked up in the city by Jake. The viewer already has a possible answer to the perspective and context that morphs this film, on second viewing it becomes intentionally clear. Related to this Jake's girlfriend's name, occupation, and role changes throughout. On the trip to the farm she is at one point a poet. Reciting a searing poem she dedicates to Jake, taking on another persona altogether, are her clothes different? She is whatever impresses Jake, every artistic or intellectual role she briefly assumes can be attributed to the personal interests of this man. “I’m thinking of ending things” she thinks to herself, and Jake seems to hear it. Later she checks the car vanity mirror, it is cracked. Something is fundamentally wrong.

“Every cloud has a silver… and I believe that to be true.”

After discussing insects whose heads just explode, Jake abruptly stops, they have arrived at the farm. The dreadful tone in the novel strikes its first discordant note in this film as mother (Toni Collette, Hereditary) waves welcomingly, yet mechanically and eerily from the window. Jake is reluctant to go inside and urges his girlfriend to take an abridged tour of the farm. She is shown signs of something horrific after egging Jake on, “life on a farm can be brutal”, he coldly tells her, alluding to his own potential traumatic upbringing. Later they wait for his parents in the sitting room for a strangely long time. They linger in the hall and she jokes with Jake about the creepy looking basement door. His nervous reaction about what the scratches are is unnerving.

Jarringly, Mother and Father (David Thewlis, Fargo) appear out of nowhere. Something is off about their mannerisms and invasive questioning. At dinner Jake’s girlfriend is now an interior landscape artist, a strange contradiction, a new role. Jake seems increasinly uncomfortable, hates to be touched, and is becoming antisocial and hostile. Here Jesse Plemons reveals how repressed and sad Jake is, and his performance going forward channels the late Phillip Seymour Hoffman (Synechdoche New York). “Yes that’s true, but we didn’t talk after that.” She interrupts his yarn about their first romantic encounter. Her cold response indicates his words ring false, did they even meet? The parents uncannily age as the evening presses on, their illnesses become apparent, perhaps hereditary? Jake’s girlfriend receives many missed calls, all different names, which she ignores, “it’s fine” she says.

Time passes significantly and suddenly, but Jake nor her age. She goes upstairs to Jake’s childhood bedroom, it is labelled on the door because father now has Alzheimer's “I miss my wife terribly” he says in front of her as if she is already gone. In his bedroom Jake’s girlfriend finds books and poems, things she uncannily said verbatim to Jake in the car, things she will say in the future. Jake's parents are dying, she cannot help, his parents are dead, just an absence now. Jake apologises to her for the stench of the dog, it was never on the screen. They are back in the car, driving away now.

Conversations in the car continue. She examines the deaths as wind blowing through; she simply saw them as they are going to be. Her and Jake experience an entire gamut of emotions, defused by literary, and film discussion and criticism where she takes on yet another role, this time Pauline Kael, her film review directly opposes him, is she smoking? She can’t stand him anymore, he can’t stand himself, he is a bore with no personality. Conversation turns to contemporary author David Foster-Wallace who killed himself. That’s all he is remembered for and Jake is now angry. “We stay stationary and time flows through us”, she wears herself down with these thoughts and he wears her down with his rambling. She is tired and wants to go home. “To the farm?” he asks. There are a few more destinations to go, the highschool that is glimpsed throughout, but first ice cream, in a blizzard.

I’m Thinking of Ending Things is Charlie Kaufman’s best directed film, thanks to the narrow scope and focused smaller cast. His highly quotable screenplay matches the tone, art style and cinematography influenced by both Fargo and Twin Peaks with their small town rural isolationist aesthetics. Artifacts from Jake’s past, and present are striking against the consistent grey-white blizzard. The clean interior of the austere farm house and the many dynamic wallpapers cover up barren empty nothingness, Nietzche is framed on the wall. This is stark contrast to the mundane daily janitors (Guy Boyd, Sharp Objects) routine at a highschool that intercut the heightened claustrophobic roadtrip sequences and the haunted house farmstead.

Certain scenes take on an artificially hued overly brightened romanticized look, further enforcing the narrative of questioning what is real. Framed emptiness and characters half-cut out of frame, trauma pushed to the fringes outside the screen, what we directly see is questioned by these stylistic decisions and perspectives.

“Everything is the same if you look close enough” she is told near the end of the film. The universe does not discriminate, all is one in this uncanny space. The potential of what could be, and what never was is infinite. Jake lives or has lived either a mundane lonely life or a troubled potentially psychopathic one; merely two interpretations of many.

“Other animals can live in the present, hope was invented because humans cannot.”

Jake’s many identifiable fantasies are never fulfilled as scenarios never possible play out disturbingly in the finale. Charlie Kaufman’s temporaly muddled adaptation eschews the horror and thriller elements of the original novel - replaced instead with an existential cerebral death rattle.

This is the only film I have immediately rewatched in years. 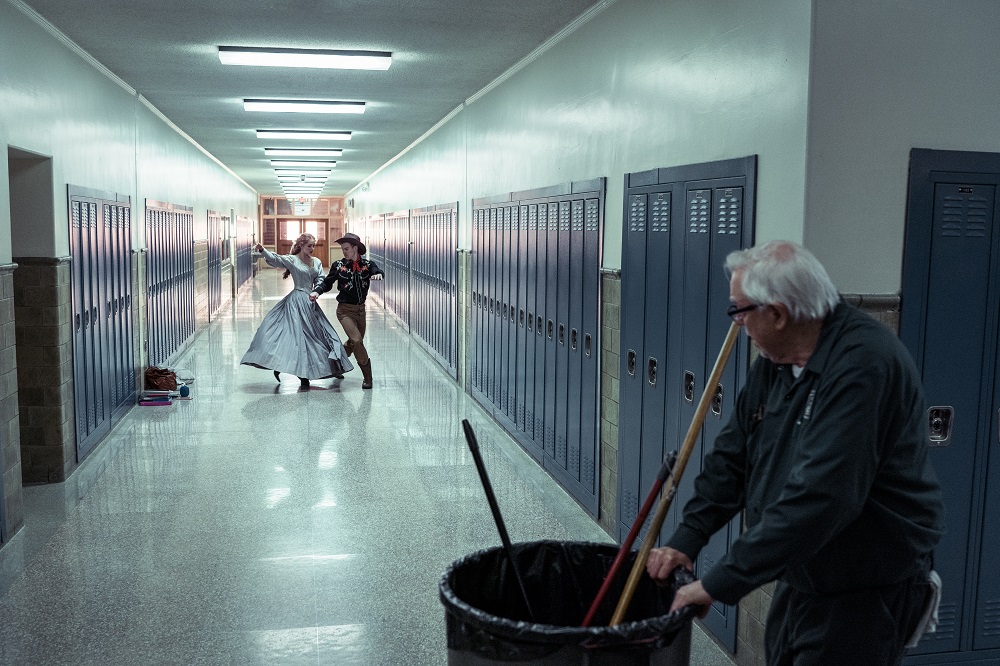 Do you feel this content is inappropriate or infringes upon your rights? Click here to report it, or see our DMCA policy.
Charlie KaufmanI'm Thinking of Ending ThingsJesse PlemonsJessie BuckleyNetflixreviewToni Collette