Directed by Lee Kyoung-mi ('The Truth Beneath'), the Korean series, now streaming on Netflix, stars Jung Yu-mi and is a wonderfully wild sci-fi fantasy concoction. 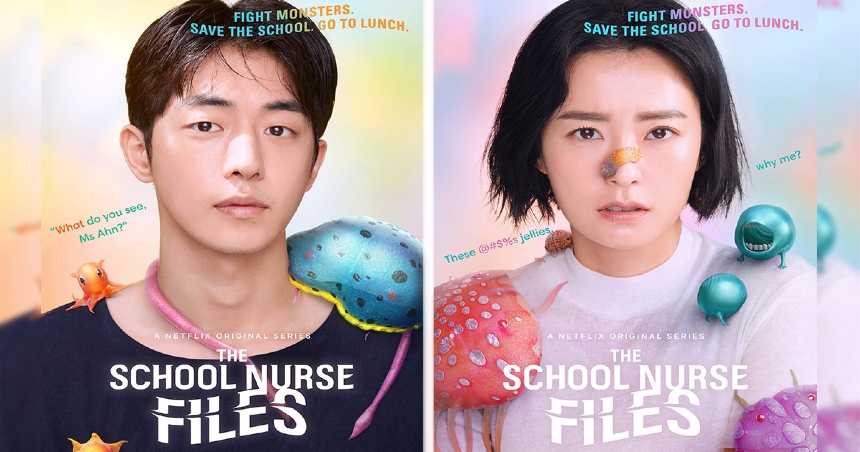 'Nurse! Nurse! Why are my fellow students becoming weird bubble people? Also, what are you doing about the monster underneath the school?'

Certifiably impossible for me to describe without waving my arms in the air, a new series from Korea happily hops between genres like it doesn't even care.

It does care, of course, and even more than its often silly shenanigans might suggest. Indeed, it's easy to be caught off guard by the six-episode series, filled as it is with high-spirited high school hijinks. New nurse An Eun Young (Jung Yu-mi) sees beyond outward appearances, however, quickly discerning that strange monsters that resemble floating bubbles of jelly are what is causing havoc among the young students.

Too bad that the students (mostly) have little idea what she's talking about, so An Eun Young loads up her trusty BB gun/weapon with plastic pellets and wields her plastic toy knife with abandon in order to vanquish the foes that are plaguing her school. That's good, since, by the conclusion of the first episode, students are being driven nuts by the weird jelly-things, impelled to desperately try and clamber over the rooftop fence of the school and plunge to an early grave.

An Eun Young finds a comrade in fellow teacher Hong In Pyo (Nam Joo-hyuk), who has a compulsion to tie knots and to teach others how to tie knots, and so he becomes a willing partner with An Eun Young as they endeavor to save the students and vanquish the mysterious monsters.

Directed by Lee Kyoung-mi, the first episode begins as a lightly comic show before darkening into something much wilder and unpredictable; the second episode mostly plays out again with the lighter side of things, yet even more thoughtful and touching. What's marvelous about the series is that it shows more of the director's range.

She made her directing debut with Crush and Blush (2008), but her sophomore feature, The Truth Beneath (2016), was a crackling thriller that freely added other elements into its rich narrative broth. More recently, in her short segment of the Persona anthology film, titled Love set (2019), she again played against what might be anticipated, bringing to vivid life a personal dispute played out on a tennis court.

Rather than binging all six episodes at once, I've been savoring them, one at a time. The episodes I've watched all have a pleasant aftertaste, like a fizzy soda without the bad effects upon the body.

Also see: Interview with the director at South China Morning Post, conducted by our own James Marsh.

Do you feel this content is inappropriate or infringes upon your rights? Click here to report it, or see our DMCA policy.
Jung Yu-miKoreaLee Kyoung-miNam Joo-hyukNetflixSouth Korea

More about The Truth Beneath