Yoo Ah-in and Park Shin-hye star in the horror-thriller from South Korea, directed by Cho Il-hyung, and now streaming on Netflix. 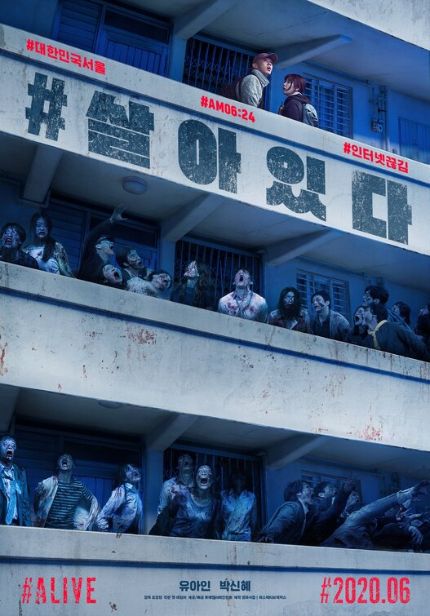 Just when you thought it was safe to shelter in place.

In the future, South Korea may be overrun by zombies, but for now, talented visual-effects artists remain in high demand.

With his hair dyed blonde, young Joon-wo (Yoo Ah-in) is apparently seeking to make his own individual mark on the world.

First, though, he wants to spend the day (with his parents away) in front of his computer, immersed in a multiplayer game with his online friends. Then one of them notices something startling on the television news: zombies!

Or, this movie's equivalent, as director Cho Il-hyung, making his feature debut and working from a script by Matt Naylor and himself, gives the zombie-movie formula a vigorous spin.

The protagonist is stranded on the eighth floor of an apartment building in Seoul, in a neighborhood that is thick with high-rise dwellings, as pedestrians below are transformed against their will into zombie-like creatures who are ... HUNGRY FOR HUMANS!

Divided rather neatly into three acts, the movie unfolds multiple variations on the 'stranded alone at home and struggling for survival' theme before moving onward to 'oh, look, there's another survivor' scenario, until the inevitable 'desperate quest to stay alive by taking crazy risks' phase of the narrative.

None of this is meant as harsh criticism of #Alive, which will likely satisfy anyone who enjoys seeing copious amounts of blood sprayed, many eyes going buggy, and a multitude of human bodies replacing any semblance of a nutritious diet.

Kudos to the visual-effects artists and especially all the stuntpeople and extras, who sway effectively in their zombie-like mood before switching instantly to 'angry fast zombie' mode and charging around like, well, zombies in a modern zombie movie.

Also to the point nowadays: Joon-wo (Yoo Ah-in) initially comes across as a whiny, 'woe is me' sort of zombie-apocalypse survivor, but he comes out of his shell after he comes in contact with his neighbor Yoo-bin (Park Shin-hye), who is much smarter, much more appealing, and much more impressively-built for survival.

The lesson? Yes, you can survive by yourself, but having a friend makes all the difference in the world.

Do you feel this content is inappropriate or infringes upon your rights? Click here to report it, or see our DMCA policy.
Cho Il-hyungNetflixNow StreamingPark Shin-hyeSouth KoreaYoo Ah-in