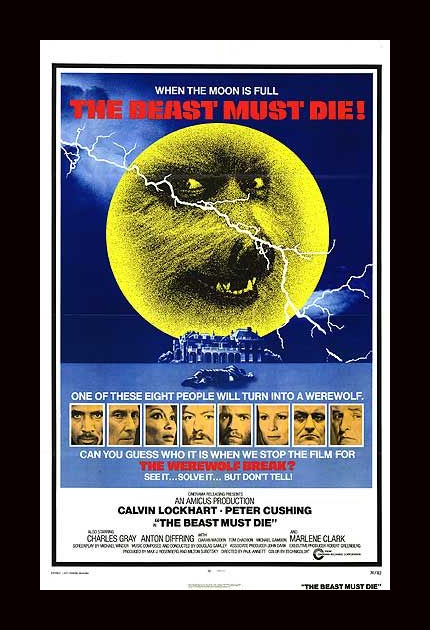 Beware, werewolf! Calvin Lockhart is on the prowl for YOU!

The Beast Must Die
Now available to stream on Fandor and also via Fandor on Amazon Prime Video.

Founded in the early 1960s by American producers Milton Subotsky and Max Rosenberg, Amicus Productions fell under the shadow of the long-established Hammer Film Productions, which loomed large in genre circles after their popular success with science fiction (The Quatermass Experiment, 1955) and monster (The Curse of Frankenstein, 1957); Dracula, 1958) movies.

The company came into its own with their horror anthologies, beginning with Dr. Terror's House of Horrors (1965), and continuing with such titles as Torture Garden (1967), The House That Dripped Blood (1970), and Tales From the Crypt (1972). The latter two titles are the ones that I remember from a misspent youth in front of a B&W television set; the trailers looked quite freakish to my juvenile mind.

Sounding similar tones in its gothic mood and ambience, The Beast Must Die is a narrative thriller, rather than an anthology. It was advertised by a marketing hook that also introduces the film: "Eight people have been invited to an island estate for the weekend. One of them is a werewolf. Can you guess which one?"

The film itself doesn't play like a mystery, but I suppose a little influence from the previous year's The Last of Sheila, which played up the "who done it" angle prominently on its theatrical poster, might have influenced the marketing folks at Amicus. In any event, the most notable aspect of the movie from a modern perspective is the casting of Calvin Lockhart in the lead role as Tom Newcliffe, a wealthy businessman who has invited eight people to his island estate with the sole purpose of determining which one is a werewolf.

Born in the Bahamas, Lockhart moved to New York City when he was 18 and began his acting career on the stage. By 1968, he had moved to England, where he appeared in supporting roles in films like Anthony Mann's final effort, A Dandy in Aspic; Joanna, a drama about an interracial romance; and the notorious Myra Breckenridge.

Lockhart earned wider notice by starring in Halls of Anger (1970) and playing a notable role in Cotton Comes to Harlem (1970). He also starred in the crime-romance Melinda (1972) and the Italian thriller The African Deal (1972) before taking the lead role in The Beast Must Die.

His character, Tom Newcliffe, is a no-nonsense executive, the type of character we would identify nowadays as having a 'Type A' personality. He is competitive and aggressive; he's decided that one of the eight people he has invited to his home is the one who is a werewolf, based on recent news reports of murderous attacks, and has installed all manner of security cameras and microphones across his island estate to provide the proof, which will come on a night with a full moon.

Cut off from any type of communication or easy egress, the guests must remain. First befuddled, then infuriated, then resigned, they are a most unhappy lot. Lockhart reigns supreme; he spits out bold, declarative, intimidating commands, even to his wife, Caroline (Marlene Clark), who is clearly tired of his endless 'games.'

Peter Cushing, Charles Gray, and a young Michael Gambon are probably the most familiar faces to American viewers, and they do their best to provide lively counterpoints to the ceaseless, argumentative statements that Lockhart constantly makes. Based on a novel by James Blish, better known for his science-fiction novels, scripted by Michael Winder, and directed by Paul Annett, The Beast Must Die is a serviceable picture, which isn't quite as fun as its marketing might have suggested.

Even so, it's a treat to see Calvin Lockhart inhabit a role that was, most likely, off-limits to him in Hollywood. The studios and independent American production companies and distributors were fixated at the time upon so-called 'blaxploitation' pictures, and Lockhart's role here, as a wealthy businessman who is determined to identify and eradicate a stalking menace, simply did not fit easily into the industry's narrow expectations, even in horror movies of the time. 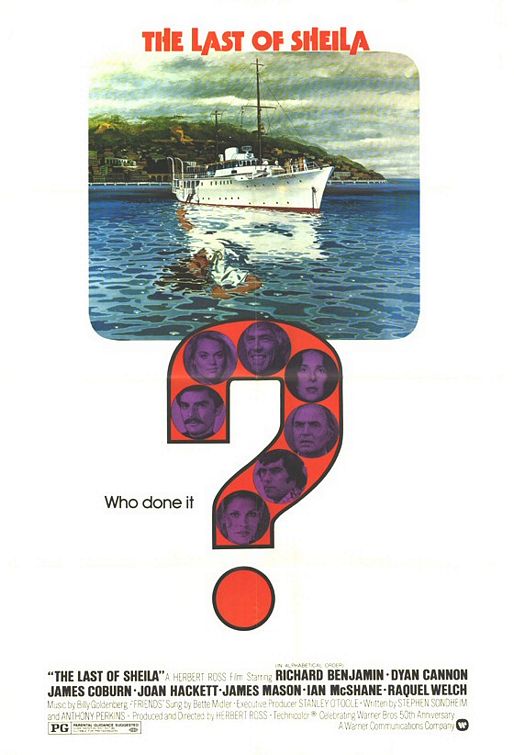 Do you feel this content is inappropriate or infringes upon your rights? Click here to report it, or see our DMCA policy.
AmicusCalvin LockhartMarlene ClarkPaul ArnettPeter CushingUK