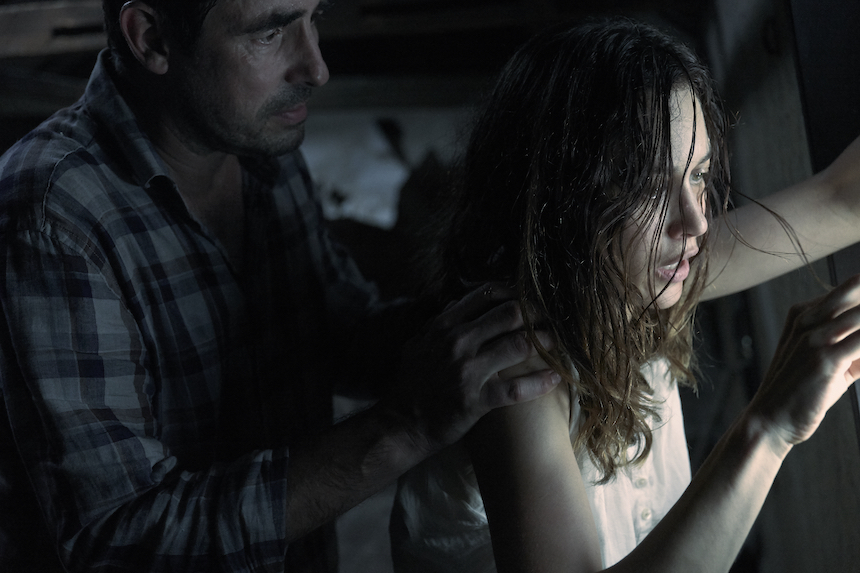 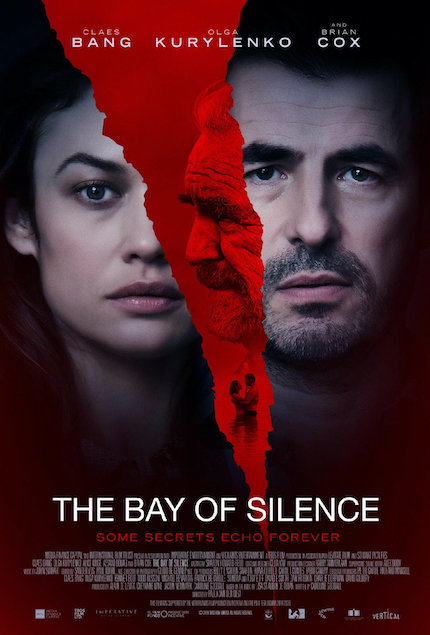 Actor Claes Bang seems to be everywhere lately; the star of the BBC/Netflix Dracula miniseries is best known as Christian from The Square, as well as a turn as Jan Holtser from The Girl in the Spider's Web opposite Clair Foy as Lisbeth Salander.

In the new film The Bay of Silence, adapted from the novel of the same name by Lisa St. Aubin de Teran, Bang stars as Will, a new dad, husband, and step-father. He's married to Rosaline, played by Olga Kurlyenko (The Death of Stalin, Quantam of Solace), and unfortunately, Rosalind has some serious issues that she choose not to disclose to her husband, namely schizophrenia, which can be a destructive mental illness if not treated properly.

I'm not sure what happens in the novel (novels and their film adaptations often differ in plot points), but in the film's case, the entire tragedy could have been prevented with just a little communication of a major health issue. The Bay of Silence explains this away with the exposition from a psychiatrist that Rosalind suffers from schizophrenia-induced amnesia or blackouts for some of her life. While this can apparently happen, you'd think that if you were going to stop your potentially life-saving medication, you'd notify or warn your spouse.

Rosalind here fits nicely within the "psychotic woman" genre, complete with a scene in which she scratches at the wallpaper, recalling the famous short story "The Yellow Wallpaper" by Charlotte Perkins Gilman. If you're somehow unfamiliar with this story, the protagonist is a new mother who suffers from postpartum exhaustion, depression and perhaps postpartum-induced psychosis, who tears at the yellow wallpaper trying to free a woman she sees crawling within its patterns.

Anyway, I digress. Will and uber-pregnant Rosalind are newlyweds and promptly move into a stately new home, but she falls from a balcony. The baby survives. And soon, a strange suitcase arrives from France, followed by Rosalind's immediate disappearance. The new baby Amadeo and Rosalind's young twin girls from a previous relationship, as well as the nanny, are also gone.

Will is at a loss, and Rosalind's rich, interfering father Milton (Brian Cox, Succession, Manhunter) isn't helpful. A house where Rosalind spent time at in her youth, "Bel Reve" on the French Coast in Normandy, is alluded to previously. A famous photographer took photos of Rosalind there that are worth a pretty penny, and there's the arrival of the old suitcase --- from Normandy. Will goes through it and develops old negatives hidden within a panel, and the images are outtakes of the series Rosalind posed for --- but in these photos, she's very disturbed and there may have been a crime committed. Rosalind hasn't been answering Will's calls, so he of course head to France, where things begin to really unravel.

Dutch director Paula van der Oest has earned a slew of awards and nominations, including two Academy Award nominations for Best Foreign Film for her works Zus & Zo and Tonio. When I read that, I was especially excited to check out The Bay of Silence. However, several choices in terms of editing and cuts --- as well as character motivations and reactions --- left me scratching my head.

Again, not having read the novel, I'm in the dark about what was changed or chosen for the adaptation. I do get the feeling that there's a good amount lost in translation, though, and a lot of that has do with the screenplay, which feels the need to effectively "fast-forward" some life events in the beginning of the film in the interest of time.

Unfortunately, the screenplay falls flat in the character development department, too. We see major tragedy, loss, and peril unfolding, but never quite feel frightened for Will, Rosalind, or the children, or attached to them, for that matter. There's also a convulted plot twist involving the nanny and a minor character that felt unnecessary to include, save to further drive the audience down the rabbit hole of criminal possibilities.

Still, The Bay of Silence is a fun popcorn thriller at times, even if the film is uneven. Bang is quite interesting to watch, whether he's got great source material to work from or not.

The Bay of Silence from Vertical Entertainment is available for rental on VOD starting this Friday, August 14.

Do you feel this content is inappropriate or infringes upon your rights? Click here to report it, or see our DMCA policy.
Brian CoxClaes BangOlga KurlyenkoPaula van der OestVertical Entertainment