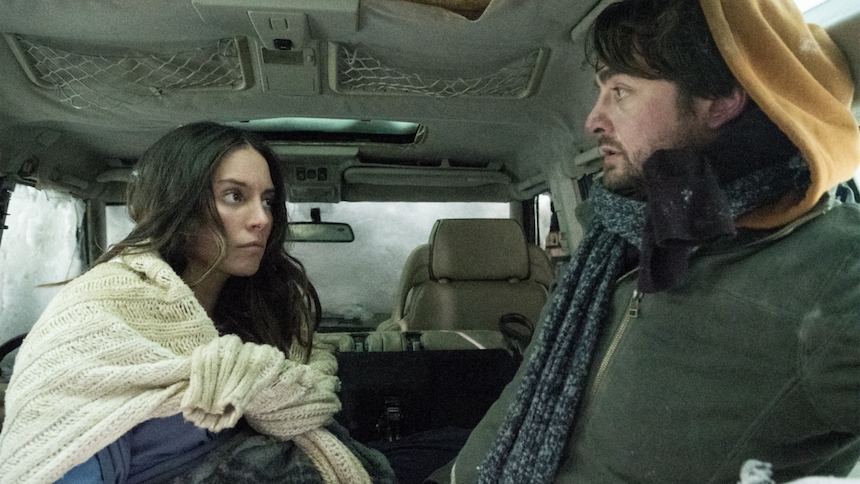 Anytime a film opens on a title card with the phrase, “Based on true events,” it’s a signal to moviegoers or at-home viewers that what they’re about to see and hear is, at best, tangentially or marginally related to some objective truth or retelling and, at worst, so heavily fictionalized that the only truth involved might be of the emotional or thematic kind.

Whatever truth is involved, though, it’s still part of the unspoken contract between filmmaker and audience to deliver a minimally compelling narrative to keep said audience surface-level engaged for 90-, 100-, or however many minutes your film ultimately runs. Making his feature-length debut after beginning his career in shorts and TV, writer-director Brendan Walsh fails on that key, foundational requirement with Centigrade, an overlong, over-indulgent survival thriller more interested in torturing its central characters than delivering a story with depth or characters with more than one or two dimensions.

To his credit, Walsh wastes little time on a prologue or introduction, instead opening Centigrade with the central couple, Naomi (Genesis Rodriguez) and Matt (Vincent Piazza), waking up after the most unfortunate nape in world history. On a road trip in Norway (aka Snowland) to push Naomi’s new book, Matt and Naomi decided to pull over and rest up during a blinding snowstorm. Except when they return to the land of the conscious and the living, they find themselves completely buried in a massive snowbank with little chance of egress or escape and a high probability of dying from hypothermia and/or starvation.

With minimal resources, a non-working cell phone (it’s 2002, so apparently it’s still allowable as a plot device despite its abuse and overuse in mainstream movies for more than two decades), and Naomi in the last month of her pregnancy ― meaning she’s supposed to be eating for two, not one, and could go into premature labor at any time (a reveal that Walsh deliberately withholds from the audience for no discernible reason) ― it doesn’t take long before Matt and Naomi’s relationship, already strained before they embarked on Naomi’s Norway book tour, slips into the usual assortment of recriminations, bitterness, and anger.

Naomi and Matt, of course, have to learn to set aside their interpersonal issues or problems and work together if they want to stand any chance of surviving days and eventually weeks buried in a snowbank,  hoping, if not for escape (Naomi’s initial suggestion, offhandedly rejected by Matt in alpha-male mode), then rescue (Matt’s repeated choice) from all-but-certain death. As the minutes grind into seemingly endless days and seemingly endless weeks, Centrigrade’s narrative momentum slows to an almost imperceptible crawl.

Walsh and his screenwriting partner, Daley Nixon, run out of ideas roughly halfway through Centrigade’s padded 98-minute running time, leaving Naomi, Matt, and by extension, the audience watching from the other side of the screen, dangling on the precipice of boredom and disengagement until the end credits blissfully roll somewhere around the 90-minute mark.

With ideas, like the resources available to Naomi and Matt, in increasingly short supply, Walsh and Nixon are left with little alternative except to hack and slash away at the central couple’s individual and collective IQs, forcing them to make one questionable decision after another (after another …) until Centrigrade becomes an endurance contest between the central couple onscreen and the audience on the other side of the screen. Once Centrigrade leans heavily into story beats generated by its increasingly IQ-challenged characters, all is practically lost (by “all” we mean both the characters’ onscreen fates and audience interest).

Considering that real-life couple Rodriguez and Piazza sacrificed their physical health ― both lost major amounts of weight to reflect the debilitating ordeal their characters face throughout Centigrade ― and the level of dedication in which both performers threw themselves into their respective roles, it’s all the more disappointing that Walsh and Nixon couldn’t craft a better, better-structured, more layered screenplay around their performances.

Instead, they’re repeatedly forced to inject a level of verisimilitude or believability into borderline banal dialogue and head-scratching, plot-driven character turns. They certainly deserved better from the screenplay, but then again, so do we. If anything, Walsh and Nixon had just enough material for a short, not a feature-length film. And with a single, contained setting baked into the premise, it’s just as clear that Centigrade shouldn’t have been forced to fit a predetermined running time.

Centigrade is now available to be watched at select drive-in theaters and on various VOD platforms.

Do you feel this content is inappropriate or infringes upon your rights? Click here to report it, or see our DMCA policy.
Brendan WalshDaley NixonGenesis RodriguezUSVincent PiazzaMavis Simpson-ErnstMalin Barr