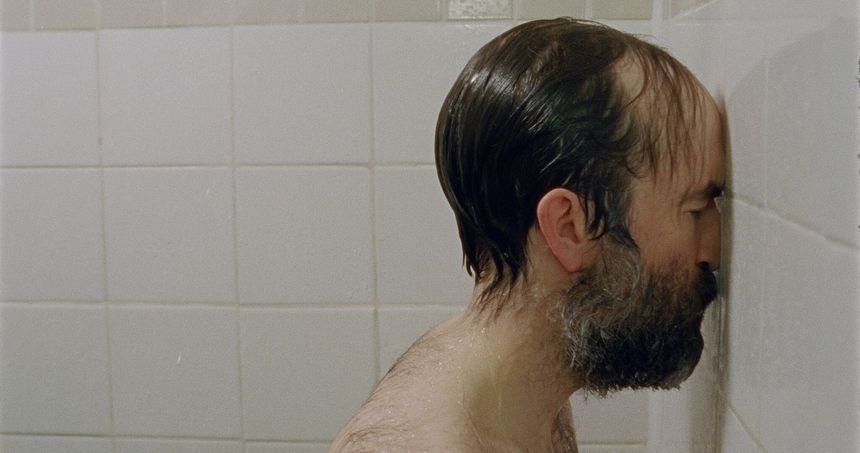 One of the very first visuals in Tapeworm, shot on lovely 16mm, is a decent-sized pile of bloody human stool in a field. This is really the only such gross-out image, but it establishes the tone for Fabián Velasco and Miloš Mitrovič's Winnipeg-set cringe comedy. Not to say that the film is shitty (ha-ha), but rather that it lingers on moments that one might instinctively look away from.

The film begins with the middle-aged man that deposited the feces, who becomes alarmed by the blood and spirals into a fog of existential dread. He wanders to a desolate, ugly quarry, where a stoner couple is having sex on a mattress. Joining them on the makeshift bed, he begins to weep while insisting they “please continue.” The man is not watching them or a being pervert—he just seems to want a spot to cry where he won't be alone.

The couple on the mattress seems to have lost the ability to react to anything with more than a shrug; the kind that let their love for weed replace having a personality. Yet, they're probably the most well-adjusted characters in the movie, which is populated by awkward social misfits, who cross each others' paths in coincidental ways. Some standouts are: a man-child who lives at home and plays soccer video games all day (one of the directors, Miloš Mitrovič); his mom, who is a slightly deranged home care nurse; and a Lena Dunam-esque comedienne who whose already-disappointing life turns absurdly tragic after an accident.

In a way, Tapeworm can be viewed as a skewering of grave misery-porn movies like, say, Lumet's Before the Devil Knows You're Dead or Iñarritu's 21 Grams—wherein each and every character seems to have an addiction, disease, empty existence, dark secret, painful past, or all of the above. Such films can be unintentionally funny in their heavy-handedness, and they are ripe for parody. Tapeworm offers those laughs sans guilt!

Winnipeg proves a fittingly dismal spot for the setting, though its anonymous look allows the characters to remain Tapeworm's main focus. Velasco and Mitrovič allowed their cast to improvise much of their dialogue, and they have structured their film in a loose, airy manner that leaves plenty of room for awkward silences and looks that linger uncomfortably long. It's a specific type of comedy (millennial mumblecore?) that I couldn't have predicted would be so oddly enjoyable.

VIFF hosted the World Premiere of Tapeworm as part of the Future // Present series.