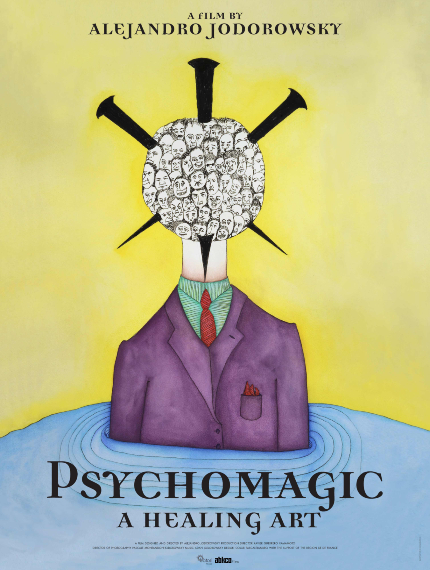 Seven years ago, our own Pierce Conran saw and reviewed a narrative drama titled Ritual - A Psychomagic Story, which he described as follows:

"Heavily influenced by cult surrealist filmmaker Alejandro Jodorowsky, not to mention starring the ageing cineaste in a minor role, Psychomagic Story is a new Italian film from the directing duo Giulia Brazzare and Luca Immesi. A psychological film with linear yet abstract plotting, it features the same disregard for narrative conventions as the aforementioned cinema giant, yet none of his creative zeal and infectious passion." (The entire review by Pierce Conran can be read here.)

Now comes Psychomagic, A Healing Art, a documentary directed by Alejandro Jodorowsky himself, described at length in the official synopsis:

"Alejandro Jodorowsky's new documentary Psychomagic, A Healing Art is an intimate exploration of the visionary director's theory of trauma therapy. His unique concept of healing uses performance art as a vehicle to counter deep, debilitating psychic suffering with literal 'acts of confrontation' in real world applications.

"Drawing from a life-long study of philosophy, psychology, ethnology, and world religions, from Freud to shamans, from Kabbalah to Gurdjieff, and everything in between, Jodorowsky's films have dealt with the individual quest for redemption and enlightenment, the protagonist facing bizarre and provocative challenges that lead to personal catharsis.

"The film explores the director's therapeutic work of Psychomagic using real life subjects in real world situations. Jodorowsky explains and demonstrates Psychomagic's principles, how it is practiced, and how it is applied. The Maestro works directly with suffering people who are eager to face, resolve, and transcend their personal dilemmas through the use of this radical and transformative mode of performance art therapy.

"Intercut with scenes from his most famous films, it parallels and explains his intent and vision present from the start of his career, giving new perspective and meaning to his seminal works, while simultaneously breaking the wall between fictional and real."

Psychomagic, A Healing Art premieres exclusively on Alamo On Demand on Friday, August 7, 2020.

Do you feel this content is inappropriate or infringes upon your rights? Click here to report it, or see our DMCA policy.
Alamo On DemandAlejandro JodorowskydocumentaryFrancePsychomagic

More about Psychomagic An Art That Heals

More about ritual - a psychomagic story